On November 30th, Cutsey the Elf let Boogs know about our Disney trip by bringing a missing package from the post office with our tickets in it. 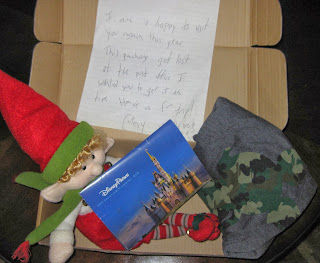 We have been discussing/planning a trip for the past 2 1/2 years. Last year, we even booked a place to stay but had to cancel.We finally boarded a plane for Disney World two weekends ago. Boogs was sooooo excited.

We made it to the Animal Kingdom Lodge a little bit after 10 p.m. on Sunday, Dec 8th. The Lodge was beautiful. We got checked-in then went exploring. We ended up eating dinner around 11 p.m. at the Mara Cafe. Our stay started a bit shaky. A kiddo in the cafe spilled an entire glass of Coke on me, yuck! Then we found out our luggage was not going to arrive until around 2 a.m.  Oh well, who needs to brush your teeth before bed? Monday was supposed to be our sleep-in day but the front desk called a little before eight to deliver our luggage to our room. At least we got it! 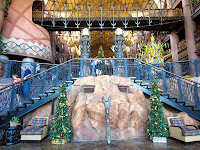 We spent our first full day in Florida at Downtown Disney. We figured Boogs would be too tired after our long travel day to enjoy a full day at Disney World. Boogs had a great time at Downtown Disney. We wandered in and out of shops, played in the fountain, built with Legos, raced our Lego creations, had lunch at the T-Rex Cafe, and finished our visit by spending several hours in Disney Quest's 5 story arcade. 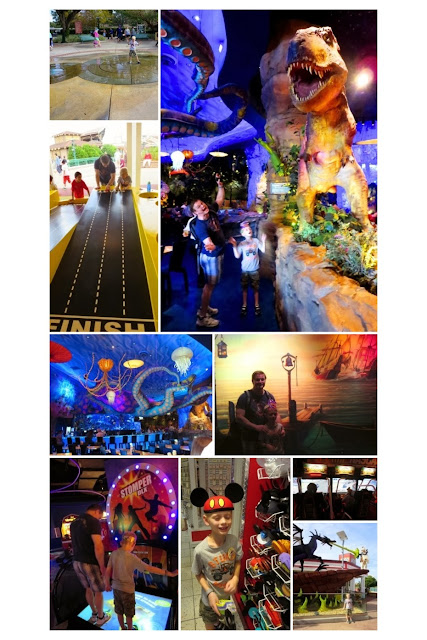 Boogs really enjoyed the T-Rex Cafe. Every 15 minutes a meteor shower occurred which caused the lights to flash, the giant animals to move, and loud noises. Boogs also really liked Disney Quest. It had everything you could wish for in an arcade - old games, new games, pinball, interactive rides, song making booths, animation classes, and air hockey. We had such a full day at Downtown Disney that we were all asleep by 7:30 p.m.

The next day was our Disney World day. We started the morning with a fantastic breakfast buffet in the Boma Cafe at the resort. Wow, the food was good. We took a bus to Disney World around 9:00 a.m. We took a few pictures then started going on rides. The first thing Boogs chose to ride was the Mad Tea Party Spinning Cups. Then he said he wanted to do everything possible in Tomorrowland. We spent the next 3 hours riding all of the rides in Tomorrowland - Speedway cars, People Mover, Buzz Lightyear's Space Ranger Spin, Astro Orbirter, Space Mountain, Monster's Inc Laugh Floor, Stitch's Great Escape, and Walt Disney's Carousel of Progress. Boogs said he loved everything in Tomorrowland, but his favorites were Space Mountain and Monster's Inc. Laugh Floor. The joke Boogs texted in before the Laugh Floor show began was chosen as one performed by the Monsters. Boogs was very excited that this joke was one of only 3 jokes chosen - What did one snowman say to another? Do you smell carrots? 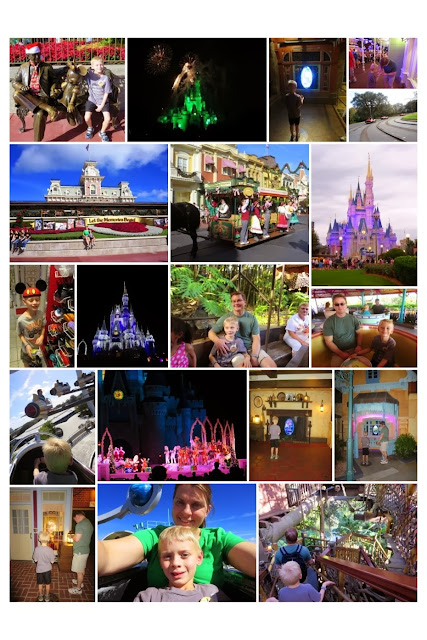 After Tomorrowland, we went on a few more rides - Pirates of the Carribean, Big Thunder Mountain Railroad Rollercoaster, The Carpets of Aladdin, Haunted Mansion, Jungle Cruise, and walked through the Swiss Family Robinson Tree House. Then, Boogs said he really wanted to do the Sorcerers of the Magic Kingdom Quest. The Quest is an interactive game in which Merlin asks park guests to help him battle Disney villains by becoming his apprentice. Boogs received a key card that unlocked portals all over the park. You had to find the portals in a specific order and then use your spell cards to foil the Disney villain in each portal. We spent the next three hours wandering the park to complete about 20 Quests. Boogs let us stop for a snack for Mickey's Very Merry Christmas Party, but he wanted to continue the Quests after that.  We finally quit doing the Quests in time to watch  Celebrate the Magic, Cinderella's castle was turned into a giant canvas for a projection show. It was very impressive. We also enjoyed the fireworks show. Boogs was tired after the fireworks. He wanted to leave and go back to the hotel to sleep. There were problems with the buses to take us back to our hotel. So even though we exited the Magic Kingdom at 10:15, we did not return to our hotel until after midnight. We made lists of our top three favorite Magic Kingdom things. Boogs: Merlin's Quests, Space Mountain, Big Thunder Railroad coaster. Me: Space Mountain, Celebrate the Magic/Fireworks, Big Thunder Railroad. Daddy: Haunted Mansion, Space Mountain, Fireworks.

We had planned on spending the next day at a different park, but were kind of worn out from our busy day. So, we decided to spend a lazy day at our resort. 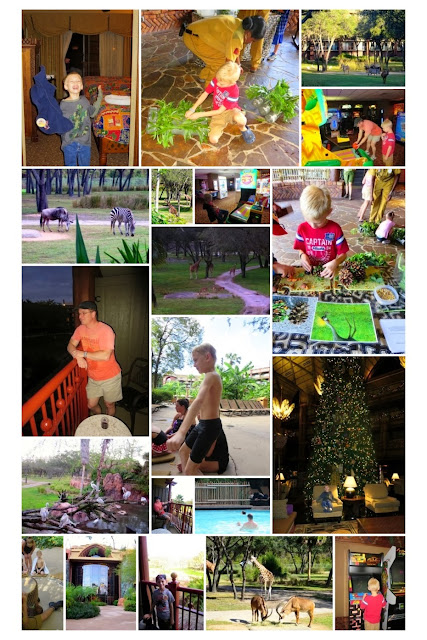 There were so many ways to enjoy the Animal Kingdom Lodge. We explored the entire resort. There are three separate savannas for the animals to roam. There were Safari Guides stationed at various viewing areas to answer any question you have about the animals. We saw Anikole cattle, elands, zebra, gazelle, wildebeest, waterbucks, okapi, antelope, giraffe, cranes, flamingo, Marabou stork, ostrich, pelican, vulture, and guinea fowl. There were also kids' activities throughout the day. Boogs helped out the lodge animals by making snacks for crested cranes and giraffes. He played Bongo (a form of Bingo) and a couple of other games with the Safari Kids' Guides. Boogs and Daddy spent hours in the pool. We also enjoyed the small game room. Daddy even had time for a workout at the fitness center. It was a beautiful sunny day and we were very happy to have spent it at the lodge.

The next day we went to Universal Studios and Universal Islands of Adventure. It was cloudy and cold. Boogs request that our first stop be the Despicable Me Minion Mayhem 3D ride. It was so cute and well done. We had to do it twice! He even chose a purple Minion for his souvenir from Universal Parks. 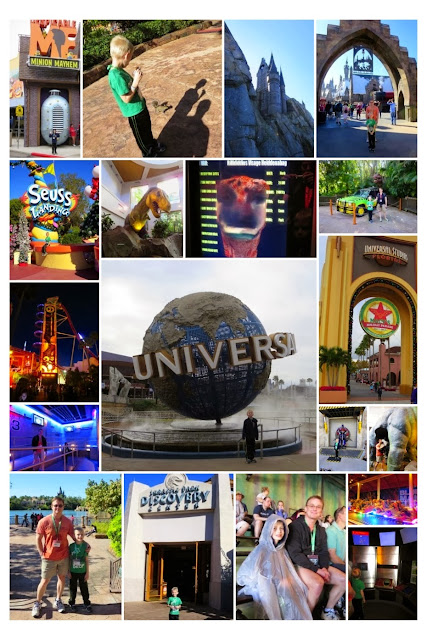 We did most of the rides - ET, Men in Black, Shrek, Transformers, and Disaster. I even got on stage during the Disaster production to play the part of an evil villain. After a few hours, we left Universal Studios and walked over to Universal Islands of Adventure. Luckily for us, the sun came out and it warmed up. Several of the Island of Adventure rides get you really soaked. We bought and wore rain ponchos and still got wet. I really enjoyed the Wizarding World of Harry Potter, but the Harry Potter and the Forbidden Journey ride made both Boogs and Daddy a bit queasy. We rode Spiderman, the Cat in the Hat, Ripsaw Falls, Jurassic Park, Popeye & Bluto's Bildge Rat Barges, and watched the 8th Voyage of Sinbad Stunt Show. Daddy and I took turns riding The Hulk roller coaster. Boogs enjoyed spending time at the Jurassic Park Discovery Center. They had several neat interactive displays. After a full day, Daddy decided he wanted to walk back to Universal Studios to ride the gigantic Hollywood Rip Ride Rockit coaster. The park was closing five minutes after we walked thru the gate. I put Boogs on my back and we ran through the park to get to the coaster before it closed. We made it just in time. Daddy and I were able to do Child Swap and each take a turn. That was quite the ride. When the ride starts, you lay on your back and go up 17 stories before the first drop. I wish we had had time ride it again. We made lists of our top three favorite Universal things. Boogs: Minion Mayhem, tie between Popey & Bluto's Bildge Rats / Flight of the Hippogriff, Spiderman. Me: Harry Potter & the Forbidden Journey, Minion Mayhem, Rip Ride Rockit Coaster. Daddy: Rip Ride Rockit Coaster, Transfomers, tie for Hulk coaster / Minion Mayhem.

We spent the next morning at the lodge before our return trip to the airport. Boogs had a nice chat with the flamingos. When the flamingos got quiet, Boogs would say, "Talk to me, flamingos." Then they would talk to him. It was pretty funny.

Our return trip went very well. I am so glad we were able to take off and spend time together having new adventures. It truly was a magical trip. 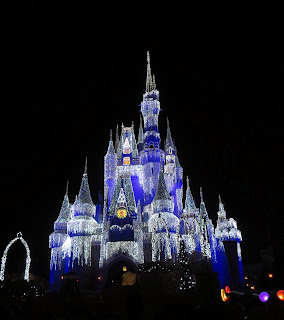