Cake in a Mug

Boogs wanted to cook "something sweet to eat". So I found the "Cake in a Mug" recipe I got off of Chasing Cheerios a few years ago. http://chasingcheerios.blogspot.com/2008/08/cake-in-mug.html
Boogs had fun mixing the ingredients. We mixed everything in a bowl and then poured it into a mug. If you combine the ingredients in the mug, you sometimes have clumps of flour on the bottom that does not mix well. For the cake, mix together 4 T sugar, 4 T flour, 2 T cocoa powder, then add 1 egg, 3 T milk, 3 T oil, 3 T chocolate chips, and 1 tsp vanilla. Mix very well, pour into a mug, and put in microwave for 3 minutes. 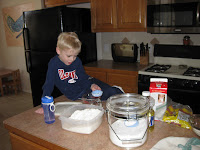 I told Boogs we were going to see some magic when we put the mug in the microwave.

Posted by Keitha at 8:23 PM No comments:

We spent part of our morning watching the slab getting poured. We found out from one of the neighbors that our DW build manager went to the neighboring houses yesterday to let everyone know the concrete trucks would be starting at 7 am. He brought donuts for the neighbors this morning for their inconvenience. 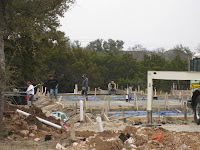 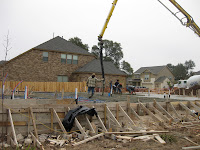 We went to the new house again this afternoon and met our new neighbors. Samuel made fast friends with a couple of kids and we ended up hanging out at their house for a couple of hours. There are 7 kids on our new street ages 3 - 8. It is going to be so great for Samuel to have a pack of kids on the street to play with.

We read a cute book, Wallace's Lists by Barbara Bottner and Gerald Kruglik, about a mouse who can't do anything without writing a list. By then end of the book, the mouse was able to have an adventure without a list. This book got Boogs and I talking about lists and why people write them. He said, "Lists are good so people don't forget things like on a grocery list." Then I asked Boogs if he would like to make a list about anything. He said he would if I wrote it for him. Here are three lists that he made.

Things I Wouldn't Do:
*Pull a cat's tail.
*Break a glass.
*Take away a baby sister's toy or take candy from a baby.
*Harm a baby
*I would never eat poison ivy or cactus or onions.
*Break a trophy

Things I Would Do:
*Play Bakugan
*Not break anything
*Not harm Tribot (his remote controlled robot)
*Go on an adventure like going through a wall (We recently read The Lion, The Witch, and The Wardrobe)
*Go to where humans turn into monkeys like Curious George

Things I Like About Myself:
*I am funny
*I can make funny voices and sounds
*I am smart about Science

We will read this book again before it goes back to the library. I wonder what other lists Boogs will want to make.
Posted by Keitha at 7:24 AM No comments:

Two years ago, Boogs got a "hatching dino egg" for Christmas. He really enjoyed watching the egg crack and seeing the dinosaur emerge from the egg. He still talks about it. So, I bought him another one this year for Christmas. We finally got around to putting it in water last week. It was a slightly defective one. Only half of the egg cracked. The dinosaur is supposed to completely emerge from the egg in 24 to 36 hours. We left it in for four days and then Boogs "helped" the rest of the egg crack. We have let the dinosaur dry out and shrink. Boogs is ready to put it back in water to see it grow again. I think we grew and shrunk the last one we had at least ten times. I wonder how long this one will last. 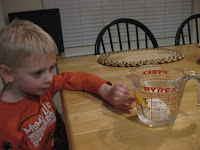 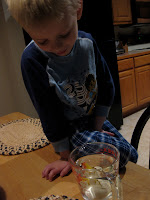 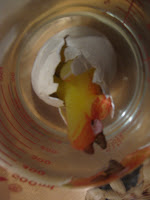 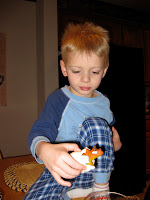 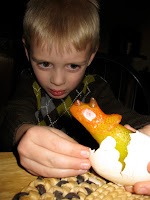 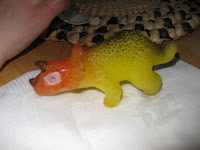 Posted by Keitha at 8:05 AM No comments:

Our new house site is no longer just a vacant lot. It has been cleared off, leveled, forms put up, and underground plumbing pipes set. If the weather stays nice and the plumbing inspection goes well, the foundation is supposed to be poured on January 28th.  I can't believe we are finally getting it started. The house should be ready by (in) May. 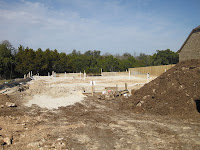 Posted by Keitha at 7:44 PM No comments:

Boogs has discovered that it is fun to play games. He has fallen in love with "Scooby Doo Pop N Race" ( a Scooby Doo version of Trouble), checkers, and the card games War and Go Fish. He is very competitive. I wonder where he gets that competitive streak? He will finish a game to the end, but might cry a little from frustration about not always winning.

We signed Boogs up for t-ball. The season starts next month and he will be on a team with kiddos from his preschool class. It will be interesting to see how he handles playing on a team. Boogs likes to make up and revise his own rules.
Posted by Keitha at 5:34 PM No comments: 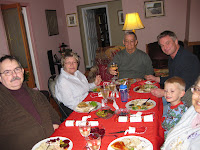 We like to go to the Mer Bleue trail. It has a raised wooden plank trail over a wetland area. There are many beaver lodges poking up through the snow. Boogs had a good time throwing snowballs at everyone. 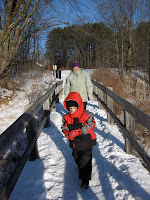 We had an early Christmas get together at AJ's house. Boogs fell in love with his Hotwheels Motorcycle Fire Jumper. 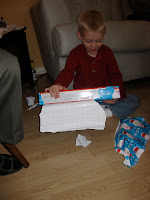 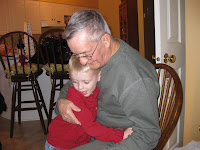 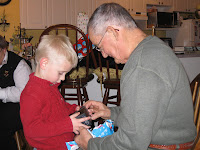 Boogs and I went sledding at the Perley hill. Grandmaman came along to take pictures. Boogs has gotten very brave since last year. 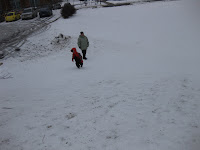 One of Boogs favorite Christmas-time traditions is feeding the chickadees. Grandpapa and Grandmaman take us to a trail where the birds will swoop down and eat sunflower seeds from your hand. 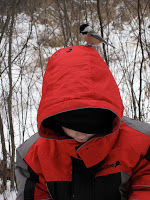 Another one of our yearly traditions is to go to the Science and Technology Museum. Boogs really enjoys the Krazy Kitchen and the lighted maze of tunnels. 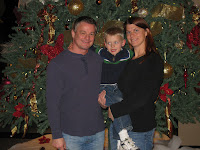 Posted by Keitha at 9:26 AM No comments: