Boogs invented a new game with his daddy. They call it "Table Ball". The name for their game is constantly changing, as are the rules. I got to play Table Ball with Boogs the other day. He spent more time telling me the endless rules than we actually spent playing the game. The general idea is that the ball has to stay on the table or someone gets a point. Boogs can use his hands to catch and hit the ball back. The person he plays against can only use their feet to catch and hit the ball. My favorite rule - "you lose a point if you push the ball too rough at the other person". Boogs gets to decide what "too rough" is. He is so serious about his rules.

Posted by Keitha at 8:46 AM No comments:

Boogs enjoyed his "Kissing Hand" and "Car" lunches so much that he asked me to keep making themed lunches for him. I have been choosing the theme by what book we are reading. Here is what I have served him so far this school year:

(The Car & Kissing Hand lunches are shown on the 1st and 2nd day of kindergarten posts.)
Posted by Keitha at 8:21 AM 2 comments:

Last week was so busy compared to our lazy summer. We have done a lot of work on the house during the past couple of months, but we did not really have a schedule. It has been a little rough. About 1 a.m. last Wednesday morning, Boogs started yelling. I got out of bed to go see what was wrong. He told me ants woke him up. I thought he had a nightmare. But when I looked in his bed, there were about 30 fireants crawling around. We had the house professionally sprayed when we moved in. It was weird that the ants were only in his bed. We did not see them anywhere else. We stripped Boogs bed, checked for ants, put on clean sheets, sprayed his room and then tried to get him to sleep in the guest room. He cried and said that he could not sleep on that mattress. So we ended up putting his mattress on top of the guest bed. He went to sleep about an hour after all of the commotion started. Luckily, he only had 3 ant bites. When it was time to wake up and get ready for school, Boogs refused. I have NEVER had to wake him up. He generally wakes up between 5:45 and 6:15 in the morning. I woke him up and he closed the door, the curtains, and pulled his sheet over his head. I had to go in about 8 times to get him out of bed. He kept running back in and huddling under the covers. Poor little guy. We made it to school just as the tardy bell was ringing. Hopefully, that will be the last we see of any ants in the house. We have not had rain in months. Yesterday's temperature was officially 112 degree Fahrenheit. Maybe the ants came in because of the extreme heat. Who knows? 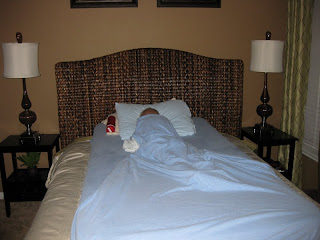 Posted by Keitha at 8:12 AM No comments:

Boogs wanted to read his new car book this morning before school. We read it together and Boogs let me know that he would like a car lunch today. So, he helped me figure out how to do that. He has already requested a monster lunch for tomorrow.
After school, Boogs told me he had a good day. He got two sticks for being good today. When he gets 10 sticks, he gets to visit the treasure box. He is very excited about that.
Posted by Keitha at 8:08 PM No comments:

Boogs started kindergarten this week. He seems to be adjusting well. He was very nervous on the first day of school. When he arrived at his classroom, he walked right in and went to the lockers to find the one with his name on it. Unfortunately, his teacher had spelled both his first and last name incorrectly on his locker, name tag and desk plate. Boogs went to his spot and found a connect the dot worksheet on his desk. He immediately started working on it. He got so involved with it that he barely paid attention when his dad and I left the room. After school, he got in the car and said, "Momma, that was not that long of a day. It is still sunny outside. I thought I had to go to school until bedtime." I guess that was one of the things that was making him so nervous, thinking he would not have time for anything else in a day except school. He said he had a good day, "But, we did not really get to the hard stuff, yet. That is what freaks me out!"

The other morning, Boogs and I were playing in his room. He started talking about a book we read a couple of months ago about Ralph the mouse. We decided to try and make a mouse maze with some blocks. Daddy came in while we were playing. Boogs challenged him to race a ball through our maze. (I just noticed that Boogs wears these pajamas a lot.) 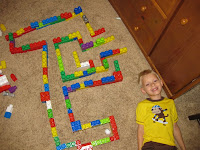 Posted by Keitha at 1:12 PM No comments:

Last week, we met friends at a nearby park for a couple of early morning playdates. Everyone arrived at the park around 7:45 a.m. This was to get used to getting the kids ready and out of the house by the time their tardy bell will ring for kindergarten and to play at the park without suffering heat exhaustion. August 19th was day 65 of 100 degree and higher temperatures in Austin for 2011. By 10:00 a.m., we want to be inside in the air conditioning.

Posted by Keitha at 8:21 AM No comments:

Boogs wanted me to take pictures of him catching bubbles on the back porch to show to Grandmaman. So, here they are:

Posted by Keitha at 7:17 AM No comments: 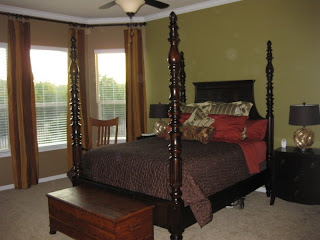 We finally received the rest of our bed frame for the bed in the master bedroom. We need to add a wall hanging behind the headboard and then this bedroom will be finished.

We are getting closer to being finished with setting up the house. During this past week the drapes were hung on the back porch, our bed posts came in, my craft bookcases came in and were put in place, the pool table FINALLY (after 3 attempts and 6 weeks) got put together, art was hung in the gameroom, and some other decorative pieces were hung. Here are a few more pictures:

We went to the sandbox park around 8 o'clock this morning. We had a breakfast picnic and played before the temperature hit 90 degrees F. Boogs and I built sandcastles, tunnels, bridges, played tic-tac-toe, and buried each other in the sand.

Thanks Aunt J for the fun toy octopus. Boogs has named him Ollie the Octopus. We are finding Ollie everywhere!