Return of the Dirt Bikes

It has been several years since we took the dirt bikes out of the garage. We did not really have a place to drive them. We used to drive them on a friend's property but the mesquite tree thorns would puncture the tires within 5 minutes of riding them. It became very frustrating. Now, we can ride them on the deer lease ranch.
The roads on the ranch are mostly dirt roads with some super sandy areas. 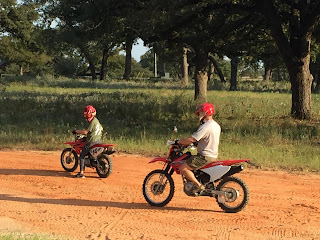 The sand is much harder to drive on without slipping around. 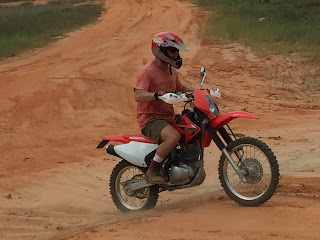 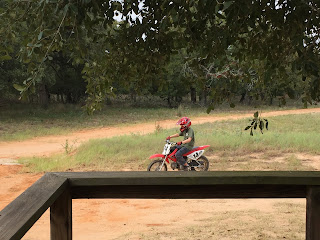 Boogs had no trouble at all getting on the bike and riding like he has never taken a break. 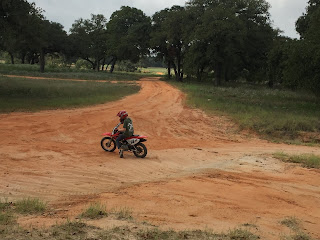 My husband really enjoyed all the space to play. He spent more time on his bike than Boogs and I combined. 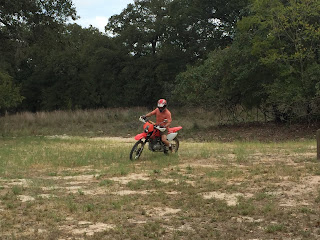 I finally rode one of the bikes. I signed up for a lesson several years ago, but my bike had carburetor trouble and I did not get to take the lesson. So, this past weekend was the first time I have used the bikes. Daddy and Boogs used to go by themselves. I hit a sandy turn and flipped my bike on top of me. I've got a few bruises from riding this past weekend. I wiped out three times. After each wipeout, I drove slower and slower because I was worried about falling again.The sand is really tough to drive through.

I picked a spot for reading and watching Boogs drive around. This part of the covered porch is perfect for lazing in the shade with your feet propped up and a good book in your hand. 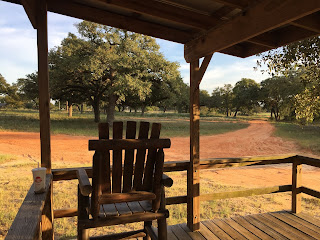 After Boogs went to bed, Daddy and I played a few games of pool. The pool table is outside of the cabins under a covered porch. Daddy beat me at every game. 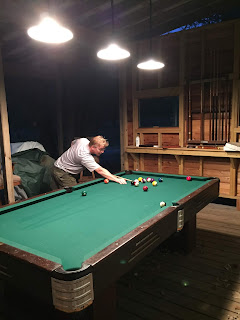 While the guys were out riding on our second day, I spent some time wandering around looking at the small creatures on the property. It took almost 10 minutes to get this shot of a bee in the center of a flower. There were about ten bees buzzing around this group of flowers. I was a bit scared of getting stung. 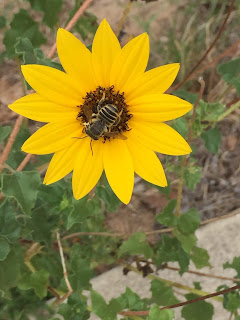 I followed a long trail of ants to their home. 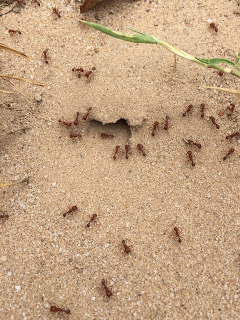 This spider has built a huge web in the outside shower area. It was in almost the exact same location the last time we came. 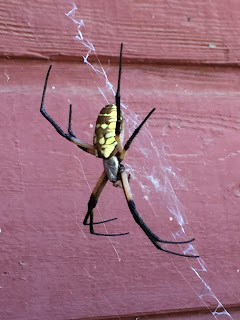 The three of us had a shooting competition with .22 rifles. Our target was a 4 inch steel target located  100 yards down the range. 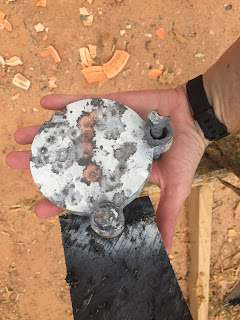 We decided the competition would be most hits out of ten shots. Daddy went first and scored 2 out of 10. 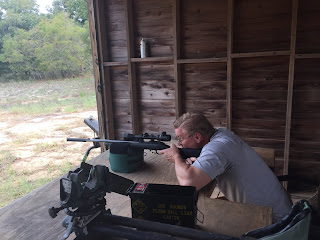 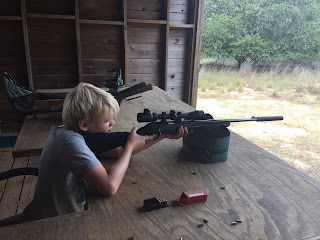 I took a turn last. I really did not expect to hear the target steel ping even once. But I won!!! I scored 7 out of 10. Victory! (or pure luck)

We packed up all our stuff and loaded the truck just as it was beginning to sprinkle. On the way home we were followed by these clouds. We hit some heavy rain with thunder and lightning. I'm so glad we had our stuff in a waterproof cargo carrier. 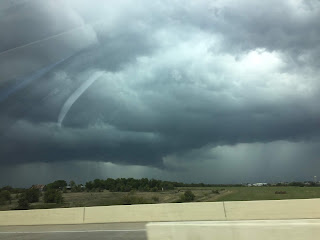 Boogs is so busy with school (way too much homework) that we really don't have time to do much of anything during the week. Hopefully, he will get into a good routine and have a bit more free time during the week.