We went back to Palmetto State Park in the late afternoon after spending the day in Goliad. The boys were hot. We immediately grabbed our swimsuits and went back down to the lake for an evening swim. We were planning on renting paddle boats but they stopped renting them about the time we got back to the campgrounds. The boys enjoyed swimming before our campfire dinner. We sat around in a circle making up stories one word at a time. It was fun to see how the stories changed as each person added the next word to the story. 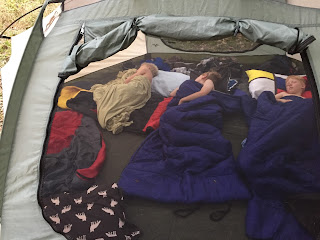 Boogs, J2, and J3 were exhausted by Monday morning, the 6th day of our road trip. I woke up early and was reading a book in my sleeping bag when I noticed J4 staring at me through the tent screen. He needed to take a walk down to the bathroom. We tried to be as quiet as possible so everyone else could sleep in. Five year olds are not the best at being quiet while camping. After everyone was up and had breakfast, we were ready to try our luck at fishing. 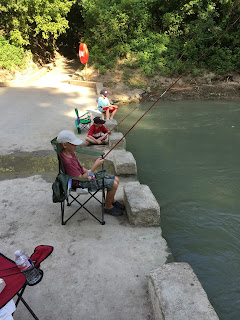 D bought the boys cane fishing poles at the ranger station. Unfortunately, the station was out of bait. 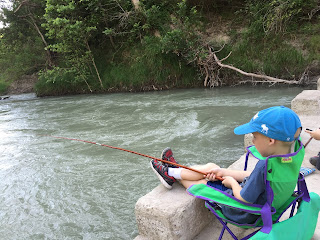 J4 and Boogs were sharing part of a dead locust to use as bait. They didn't have any luck. 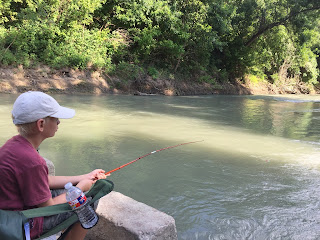 J3 had caught a grasshopper the day before and used it to bait his hook. That grasshopper had spent the night in a blueberry container and was kicking enough to get the notice of a good sized catfish. J3 was thrilled with his catch. 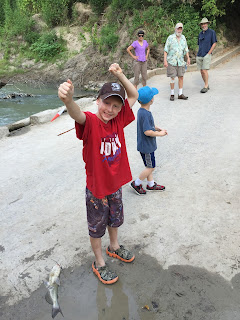 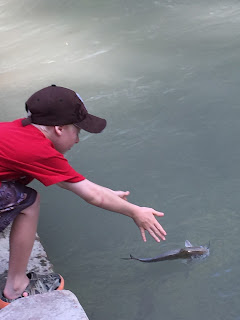 J2 managed to catch a bee and put it on his hook. I don't know how he didn't get stung. He caught a fish while some of us were out looking for bait, so I didn't get a picture of his fish. 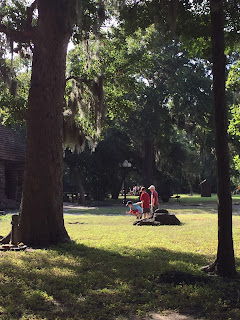 The boys spent quite a bit of time looking for small insects. They eventually found a small grasshopper but did not have any luck with it. We were getting hot in the sun so we decided it was time to get back in the lake.

We rented two paddle boats for an hour. There was a lot of boat hopping while we were out on the water. We raced for a little bit. After about 20 minutes, the boys (me too) realized that paddle boats were a lot of hard work for your legs. We would not let them jump in the water from the paddle boats so we took the boats back early. 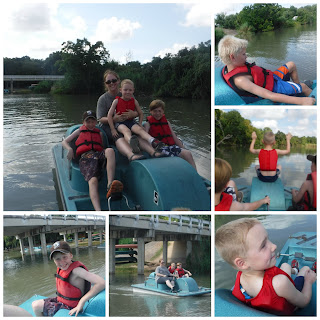 We had the entire lake to ourselves. 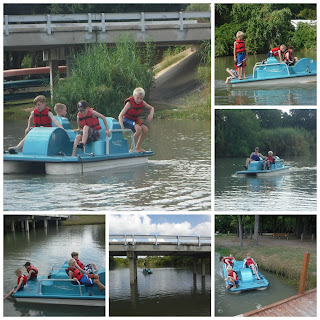 The boys spent another hour or so swimming and jumping off of the docks. Then we packed up camp, took showers, and left Palmetto State Park.

We accidentally missed a turn on our way to Mckinney Falls State Park. The boys were starving. We told them we would stop at the next place we saw and this was it. 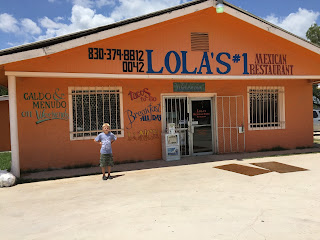 Lola's Mexican Restaurant. It was out in the middle of nowhere and had metal bars on the windows and doors. We went inside and ordered lunch. 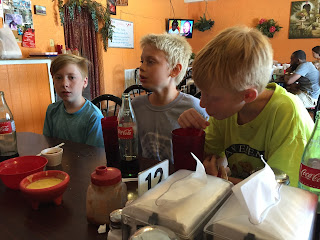 The food was delicious! The boys ate like we had been starving for a week. Lola's closed at 2 pm. We were unaware of that when we walked in at 1:30 and they did not mention it while we were ordering. They were very kind to let us finish eating even though it took us until about 2:15. Everyone took a restroom break before we got back in the car. We were about ready to leave when we noticed we were one kid short. D went back inside to get one of the J-boys. It turns out he was stuck in the bathroom because of a faulty door lock. The people working at Lola's did not know he was still in there and they almost closed and left. There aren't many dull moments on our camping trips.

It was beyond hot by the time we made it to our campsite at McKinney Falls. We set up our tents and then decided to make a grocery store run because we were out of water. D & I started complaining to each other about how hot it was and discussed if there was anything we could do until it cooled down. Yes there was. Just down the road from the grocery store was a huge movie theater. We took the boys to see the new Ice Age movie so we could enjoy the air conditioning. We had the entire place to ourselves except for four people who came in as the movie was starting. 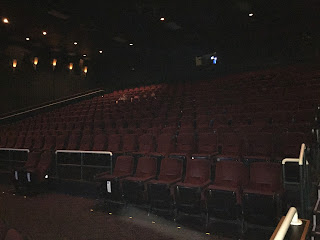 When we got back outside, there was a pretty good storm going on. It was pouring and we saw quite a bit of lightning. 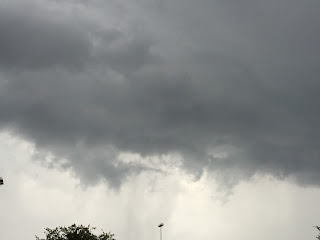 We were trying to figure out what to do. I ended up calling my mom and asking if we could invade her house for the night. She lives about 15 minutes from the movie theater. Of course she said yes and she let us wash our wet swimsuits that had been sitting in a plastic bag in the back of the car all afternoon. We had nice visit. 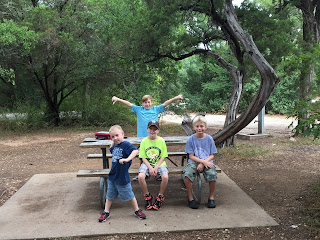 The next morning we went back to our campsite to collect the tents. They had an inch or two of water inside of them because we had not put the waterproof covers on them. We went on a little hike to  explore the upper and lower falls. 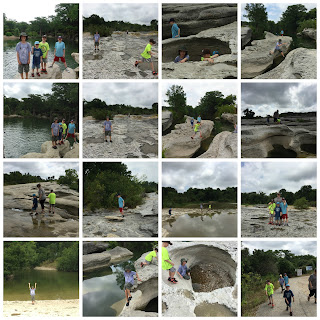 It was hot, sticky, and threatening to rain again so we called off the last day of our trip and went home early. This year's camping/road trip was more tiring than last year's 4000 mile trip. The heat was too much. The boys agreed that they want to leave Texas for next year's trip and go somewhere they might need to wear a jacket.

As always D, here is the phrase list for this trip:
*Twix & Yogurt Kitties
*we don't bury our horses
*put that on the continent, it's too big for an island
*Frankentent lives through the magic of Gorilla Tape
*rain, of course
*Is that Tish singing?
*found a cold spot
*this fire needs a little more lighter fluid
*tic-tac-toe face, make a waffle on it
*the what what at the what what
*how many people have stuck their finger where a pig's brain used to be
*how many people can say they watched a live taping of a KISS concert in their theater room
*Dale, Dale, and the other Dale
*why did the football coach leave a message
* 3-2-1 Scavengers
*Mom to the rescue

Can't wait to figure out where we are going next year. Probably somewhere with rain.

This post is linked to:
Country Kids from Coombe Mill
Posted by Keitha at 11:35 PM