Every summer, my friend D and I take our kiddos on a camping trip. Boogs loves having the company of the four J Boys on these trips.

Here are links to our past year's trips: Colorado Bend State Park in Texas, Crater of Diamonds State Park in Arkansas, and Carlsbad Caverns in New Mexico, and last year's huge trip parts 1, 2, 3, 4, 5, 6. 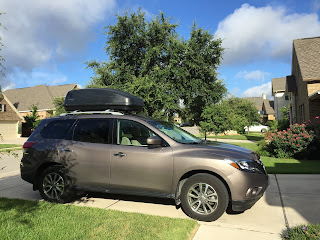 This year's trip was not really a camping trip, it was more of a trip stringing together a bunch of day trip activities. After last year's 4000 mile trip, the boys told us they wanted to stay in Texas for the next trip. They did not want to be in a car more than a few hours at a time. It is about a 3 hour drive (with little traffic) from our town to Houston.We bought a Houston City Pass to "save admission on the Top 5 Houston attractions". It really did save us some money. 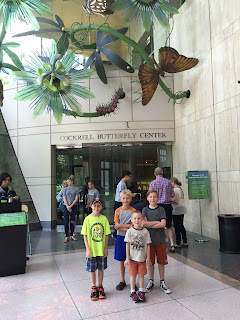 Our first stop on our time in Houston was the butterfly center inside the Houston Museum of Natural Science. You can see in the first photo on this post that I have a lovely borrowed cargo carrier on top of my car. Unfortunately, I forgot about that carrier while I was trying to park in the museum's garage. The garage had a 6 ft 8 in clearance and I did not. OOPS! There was a terrible noise when I drove into the garage. The lady in the pay booth started yelling at me and pointing to my car's roof. I panicked a bit because it looked shorter inside the garage than the opening. I asked the pay attendant if I could back up. She said no. I then asked if my tires would be shredded if I backed up. She said there was not a back-up preventer she just didn't think I should back up. That is not how I saw it. I asked D to get out of the car and take a look. She said the carrier was still attached and a little caved in (it was halfway thru the opening). I slowly backed up with another horrible screech and managed to get out. The top of the carrier popped back up into place. It had a nasty scratch across the top, its function was not damaged, the lock was intact, and my car's roof was not harmed in any way. What a lucky break! Of course the boys had a great time teasing me about it for the rest of the trip. They read off EVERY clearance sign they saw. 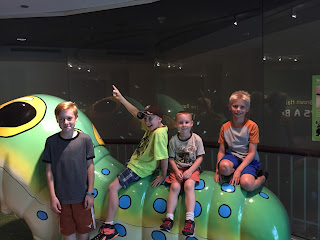 There were many exhibits about insects in the butterfly center. Boogs liked watching the live critters. 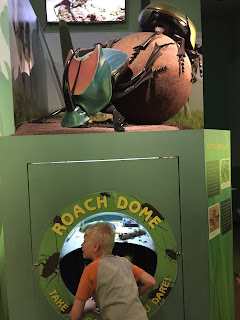 The inside of the butterfly habitat was beautiful and humid. 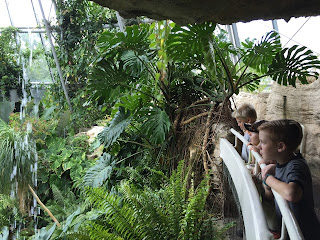 There were different species of butterflies flying all around us. 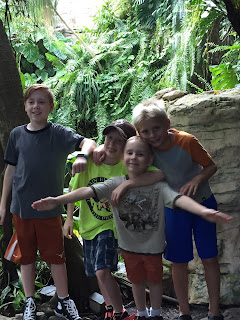 The boys liked the interactive games, especially this one that reminded them of Pac-Man. It  had bugs in it that you had to avoid and a maze to get through. 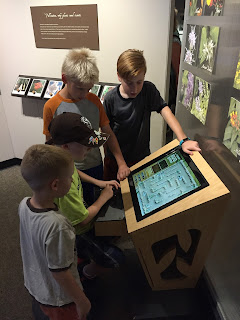 There was also a plexiglass enclosure bee hive in the butterfly habitat that had a tube going outside. We left the butterfly center and went into the main part of the museum. D told the boys she was mesmerized by the Foucault Pendulum when she was a child. The pendulum hangs down three stories and takes several minutes to slowly swing back and forth to knock down a block. 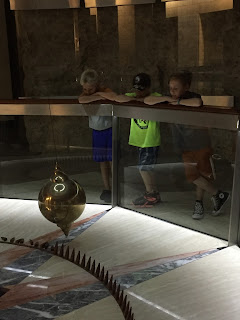 We were watching it for a while and then I asked the boys to tell me how many more times it would need to swing to knock a block down. They all shouted out their answers and we started counting. Pretty soon a crowd had gathered around and were counting with us. Each time we counted past one of the boy's guesses, there would be a loud moan of despair. J4 guessed 18 and the block fell down on 19. It was funny to watch the cheering all around the pendulum when a block was finally knocked down. 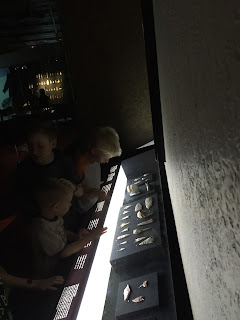 We spent a long time in the Hall of Americas exhibit. There were several volunteer docents in the Native American section offering a presentation of arrow heads, flint & steel, and giving information about Native American artifacts. It was kind of funny, because the volunteers would ask the boys questions about the objects and the boys would answer the questions and then give her a ton of information that went along with it. The three volunteers started shaking their heads and told us the boys probably knew more information about the artifacts than they did. 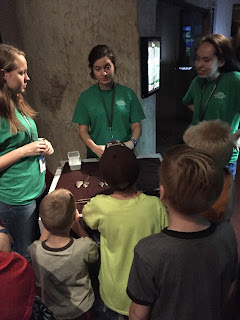 Here is Boogs trying to make a spark with flint and steel. All of us tried it but only D was able to strike a spark. 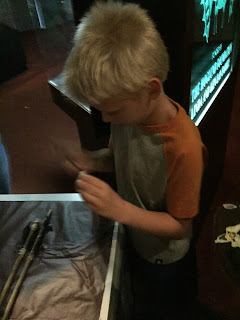 We mostly managed to keep the boys together while touring the exhibits. 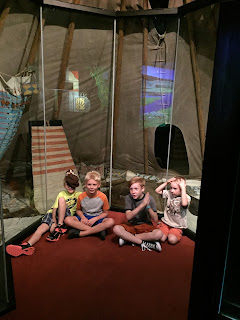 We left the Hall of Americas and went up to the Hall of Ancient Egypt. Boogs was fascinated with the mummified cats. 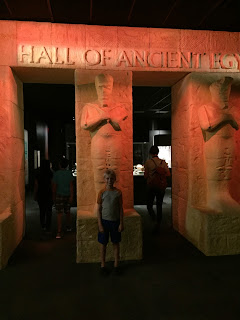 A museum employee, Rich, came up to the boys and started asking them question about ancient Egypt and giving them information about the exhibits. Then he kind of high-jacked our tour. The boys were excited to hear about the process of mummifying and the history surrounding the practice. We practically raced through the Egypt exhibits with Rich and then he turned and asked the boys if they had seen the dinosaurs. He herded them to the elevator and toured the Hall of Paleontology with us. I did not take a single picture with the dinosaurs. Rich was a wealth of information about paleontology, he has actually been on many archeological digs. At one point, he turned to D and I and said, "I wouldn't be surprised if several of your boys could be identified as GT." We just laughed.

We stayed at the museum almost until closing. It was definitely not enough time to explore everything. You would need several days to do that. I definitely want to go back. We found a place to eat dinner on our way to the (tall) parking garage to get our car. There was still time to swim after we checked into the hotel. The boys thought it was great to have the whole pool to themselves. 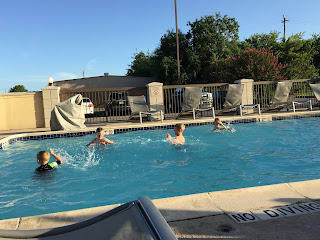 We had a busy and fun first day of our trip. I kind of missed the tent, but it was nice to have air conditioning and a soft bed to sleep on.
Posted by Keitha at 9:36 AM