Day 3 in Houston was a fun and busy day! We went to the Houston Zoo, the Downtown Aquarium, Sting Ray Reef, swimming at the hotel, visited Aunt G's horse, went out for ice cream, and eventually went to bed.

I did not take very many photos at the zoo. There were tons of neat animals to see. It was hot. We went to the zoo in the morning so that we would be in the air conditioned aquarium in the afternoon. That was a good plan! 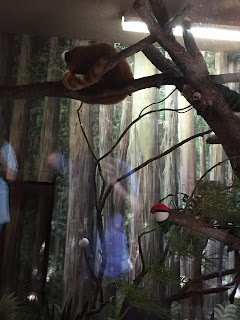 Yes, those are Pokeballs in with the red panda. Apparently, the zoo is ready for PokeGo! players. The Pokeballs were all over the exhibits. It kind of annoyed Boogs because he felt it took away from the zoo experience. 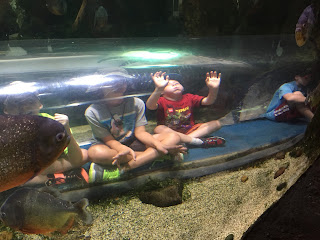 What fun to climb through a tunnel in the middle of an aquarium with fish swimming by! 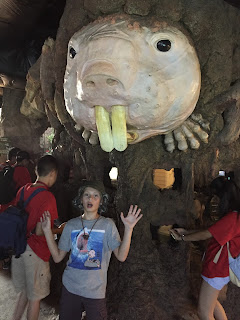 Boogs insisted I take a picture of him with the blind mole rat. 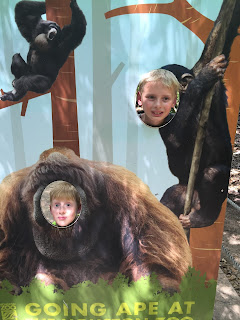 We came with our own little monkeys. 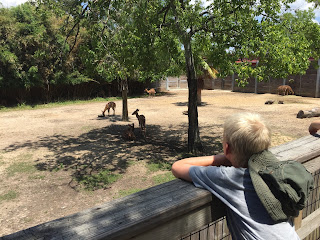 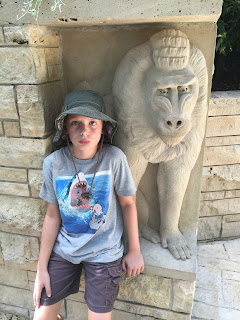 Boogs and the baboon certainly do look alike. Some of the boys really enjoyed the zoo. One, not so much. 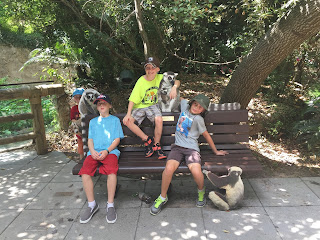 Our next stop was the Downtown Aquarium. Everyone liked the Aquarium. We decided to eat lunch at the aquarium restaurant. There was a 45 minute wait so we went to the gift shop before lunch. We told the boys they could pick out something small. 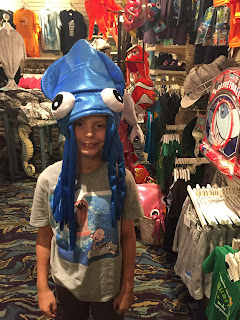 Boogs and J2 chose squid hats. They wore them everywhere and plan to wear them to school on crazy hat day. 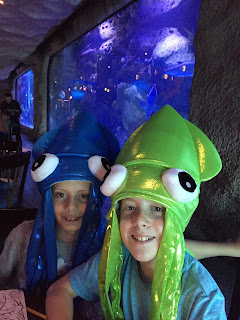 Yes, they did wear those crazy hats at the lunch table. 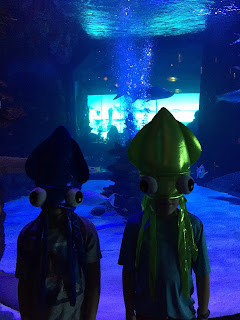 We always have so much fun on these trips with the J-Boys and D. 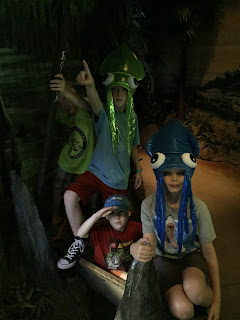 Boogs thought about catching that lion fish. He was remembering the lion fish sushi he had in Florida earlier this summer. There were many different areas and exhibits to explore at the aquarium - Louisiana Swamp, Shipwreck, Rainforest, Sunken Temple, Gulf of Mexico, Education Room, and the Maharajas Temple with tigers. 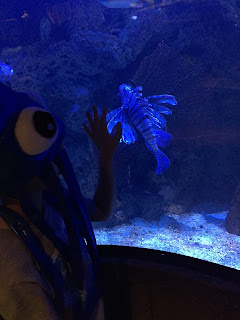 I saw a sign about the Flower Garden Banks. My husband and I are going diving there this month. 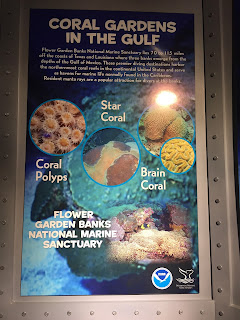 I found it odd that there were two white tigers at the aquarium. 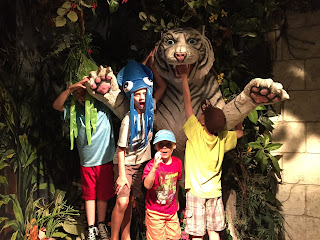 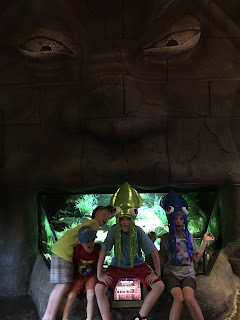 I think our favorite part of the day was spending time at Stingray Reef. 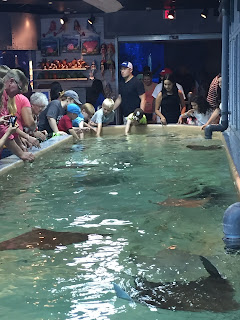 We bought little fish to feed the rays. 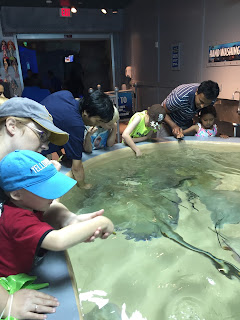 At first, Boogs was really nervous about getting that close to the ray's mouth. 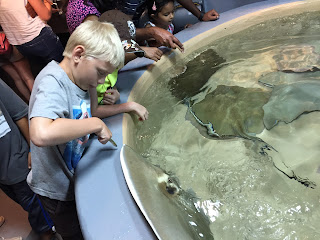 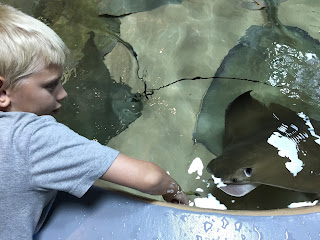 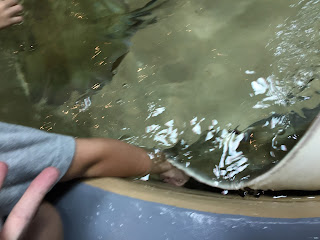 After he fed the first one, he wanted to feed them again. 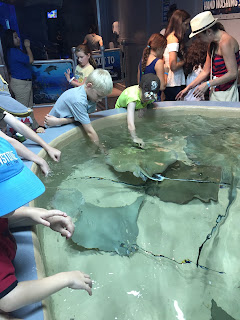 What a neat experience!

We left the aquarium and went back to the hotel for a dip in the pool. I swear, Boogs is a fish who needs a daily dose of submergence.

Around 7 pm, when it was not so hot, we met D's Aunt at the stable to meet Avatar. Aunt G put the boys to work. They had to brush Avatar. 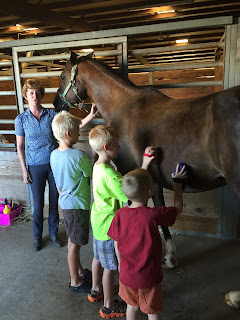 They each cleaned a hoof. 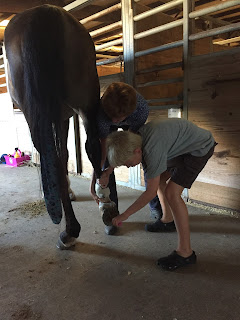 They helped put on Avatar's hoof guards (that is not what those are called, but you get the idea). 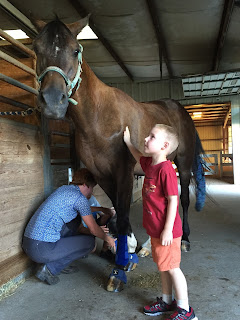 Then we took Avatar outside. Aunt G put Avatar through his paces in an outdoor ring. Afterwards, the boys took turns holding Avatar while he had an evening snack. 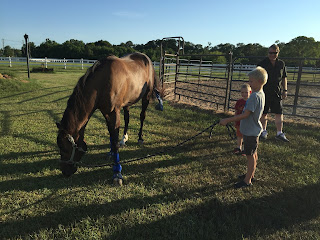 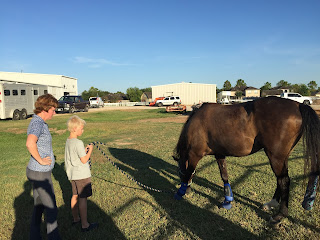 We left the stables for a quick bite of ice cream before returning to the hotel. Thanks Aunt G and Uncle C for letting us meet your horse.

You would think the boys would be exhausted, but they still found the energy to play a dice game before bed. 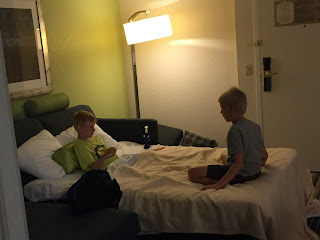 This post is linked to:
Country Kids from Coombe Mill