Wow! Halloween came and went quickly. Boogs and I had fun decorating the front of the house and the yard. 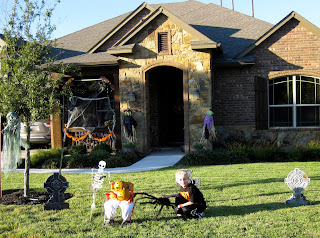 Halloween used to be his all time favorite holiday. He still liked it this year but was not as into it as years past. He had such cute costumes when he was little - Strongman, Doctor, Fisherman, Mailman. 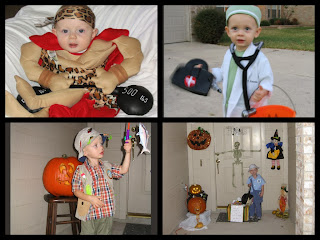 As he got older, his taste in costumes changed - Vampire, Frankenstein, Alien, Skylander Trigger Happy. Boogs got tired of wearing his mask while trick-or-treating this year. He decided he would wear it, even though it was annoying, because someone at one house asked if he were Tigger from Winnie the Pooh. Boogs did not like that at all. 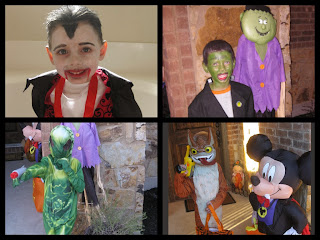 Boogs and my husband always carve the pumpkin together because I can't stand the smell of pumpkins.  This year, Boogs told us the smell of the pumpkin was "unbearable" to him. But, he still helped clean it out. Boogs decided the pumpkin should be carved into Jack from Nightmare Before Christmas. 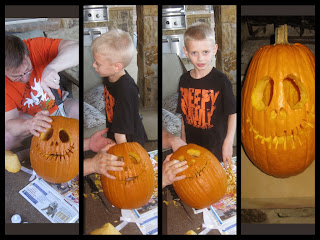 Boogs spent almost about an hour and a half trick-or-treating. He went with a big group of kids from the neighborhood and then he and his Dad kept on after the rest of the group went home. He has enough candy to last all year. 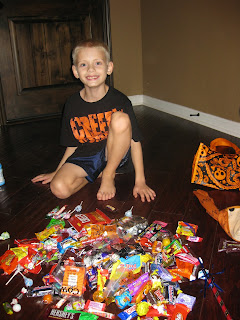 This year, Boogs sorted his candy but he did not count it. He used to count it to make sure that I would not steal all of the good chocolate bars. Ha! 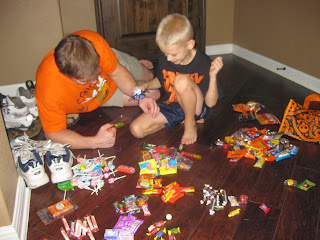 We have already taken down all of the Halloween decorations. I can't believe how quickly this year is going by. It will be 2014 before we know it. Hope you all had a Happy Halloween.
Posted by Keitha at 8:11 PM