Boogs' lunches are inspired by the books we read at bedtime the previous evening. Each night, Boogs reads one book to me and I read a book or a chapter of a book to him. I usually post his lunches once a week. Click on the "lunches" label at the end of this post to see lunches from previous weeks. We like to pack our lunches in ELBs and Laptop Lunchboxes.

Earth to Clunk by Pam Smallcomb 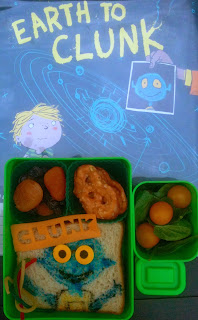 This is such a cute book. In school, a boy is told he has to write to his new pen pal, Clunk from the planet Quazar. The boy is not very happy about writing any letters until he decides to send his bossy sister to Quazar as a gift to his new pen pal. Then the boy and Clunk send each other several disgusting/filthy presents back and forth. The boy's mother demands he get his sister back from Clunk. Eventually, his sister is returned and Clunk comes for a visit. Boogs thought this story was hilarious. He liked seeing what disgusting things the boy would choose to send to Clunk. Reading this book made Boogs want a pen pal of his own, unfortunately I don't have the address of any friendly aliens in need of pen pals. 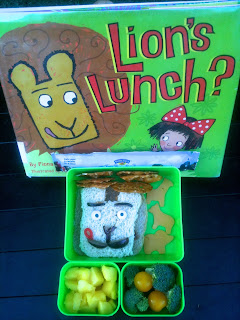 Sarah was happily singing and strolling through the jungle when a mean lion roared at her. He criticized the way she walked and sang. He pointed out how all the other animals in the jungle walked and made noise and she was nothing like them. He wanted to eat her because she should not be in his jungle. Sarah asked, "If I can do something that nobody else in the jungle can do, will you let me stay?" Sarah drew a picture of the lion. The lion was furious with the picture she drew. He thought he was a handsome lion but Sarah had drawn a mean, red-faced, mad looking lion. The jungle animals agreed that the picture looked just like Lion. The lion became thoughtful and realized he did not like the way others saw him, he wanted to change. Sarah came back the next month and was able to draw a great big happy lion. Boogs and I discussed bullying after reading this book. Boogs pointed out that when people are being bullies it does not make anyone happy. 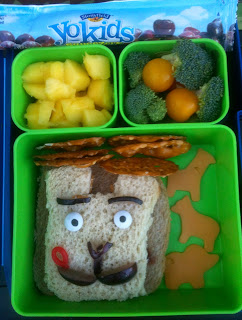 Side By Side / Lado A Lado: The Story of Delores Huerta and Cesar Chavez by Monica Brown 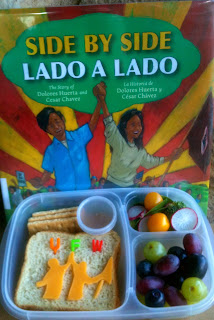 Boogs and I were talking about where our food comes from, who grows it, and how it is taken care of. I found this book in the Spanish/English section of our library. It tells how Dolores Huerta and Cesar Chavez grew up and how they came together to team up to fight for farm workers rights. Boogs was shocked that farm owners used to spray poisonous insecticides on their fields WHILE workers were working in the fields. Huerta and Chavez cofounded the United Farm Workers Union in 1967. Their work brought about change for farm workers. They fought for health benefits, clinics, wages, pensions, and proper treatment. Boogs was interested in this story.

Just a lunch taken on a day when I had no inspiration. I make Boogs' lunches in the morning, usually between 6:15 and 6:40, while we are eating breakfast and having a bit of spelling practice. Some mornings I just can't get a good "picture" of how to interpret a story into food. This was one of those mornings. 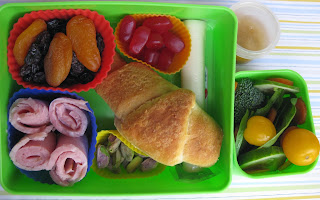 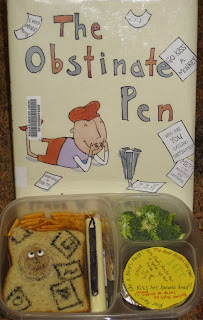 Uncle Flood loves pens. He has pictures of pens framed on his living room walls. He was delighted to unwrap a new pen and begin writing. He began to write: The following story is all true. The pen did not cooperate, instead it wrote: You have a BIG nose. Uncle Flood tried several more times to write his sentence but the pen continued to mark insults onto the paper. Disgusted, Uncle Flood threw the pen out the window. The pen passed through several people's hands and insulted everyone until it finally found Horace, who knew the true purpose of this pen. Boogs laughed at all the insulting things the pen wrote. His favorite was when the pen wrote in the policeman's ticket book: Kiss her, banana head! We read this book a couple of times during the week we had it checked out.

In the ELB lunchbox: almond butter & jelly sandwich with Horace drawing on many pages, cheesestick pen, crackers, dried papaya (under cheese stick), broccoli, and applesauce with insults written on top.

Be sure to check out the wonderful sites I link to on my sidebar! If you want to see more book inspired lunches, click on the "lunches" label at the end of this post or go to My Story Themed Lunches board on Pinterest. I would love for you to leave a comment to let me know you stopped by.
Posted by Keitha at 8:15 PM