I have had a lot of fun learning how to crochet amigurumi patterns. Amigurumi is the art of creating small stuffed yarn creatures, working in rounds, and making cute things. I started crocheting in February and have made quite a few cute creatures. I have posted about all of the animals in this picture except for the cat. 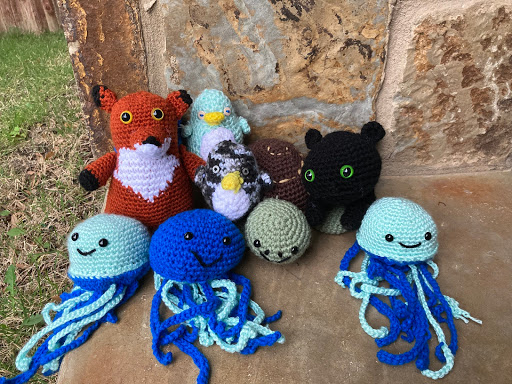 I have a friend who had two feral kittens living under her backyard shed. When we had an ice storm back in February, she trapped the kittens and set them up in her guest bathroom until the weather warmed up. She had quite an adventure getting through that week with feral kittens. After the storm, she had the cats neutered before she released them. Both kittens were jet black with green eyes. I decided to make a little black crocheted cat for her. Here is a picture of one of the feral kittens glaring at my friend. 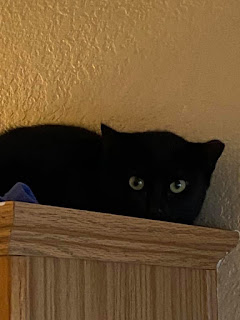 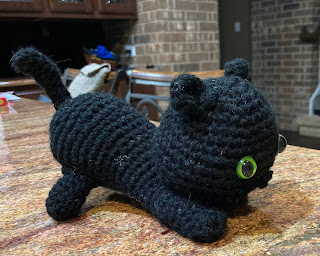 It looks like it is ready to pounce. The pattern was written for a black cat with white paws or a white cat with black paws. I kept the entire cat black to match the little feral kittens. The pattern calls for a 2.5 mm hook. That is teeny tiny and I did not have yarn small enough to use that size hook. My kitten is a bit larger than the pattern. The pattern was easy to follow and I love how it looks like this cat is ready to play.
I gave this same friend one of the jellyfish I had made the previous week. She is moving to a new school next year and has decided to make her new classroom marine themed. She asked if I would create some marine animals for her new classroom. I found a post on pictopals.com with links to 23 free sea creature patterns. My friend and I went through the list so she could pick out which animals she wanted.
First, she asked for a ray that was multiple colors of blue. I made four rays using patterns from here, here (I made it without the cephalic horns on the sides of its mouth), and here. She chose the striped ray and I gave the other rays away. The ray is my school's mascot. 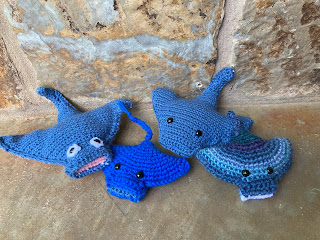 I tried crocheting an octopus next, but I could not get the tentacles to cooperate. I tried to make a starfish next but I had trouble with the arms. My friend kept the star fish and said it had "character" and "charm".  Sure! Definitely not my best work. 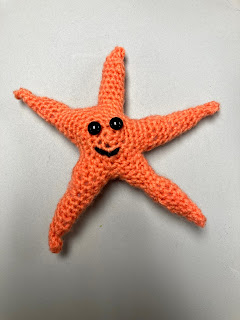 My friend fell in love with Whitney the Whale Shark, a pattern created by The Kotton Kaboodle. My friend loved the look of this whale shark so much that she purchased the pattern for me to use. The picture below shows the start of Whitney's mouth. If you look at the paper behind it, you will see that the mouth is covering up some little yarn skeins. Those yarn skeins rate the difficulty of this pattern at 5 yarn skeins. It was a 12 page pattern. On her post, the creator of Whitney stated that there are more than 4,300 stitches on the body of this whale shark. 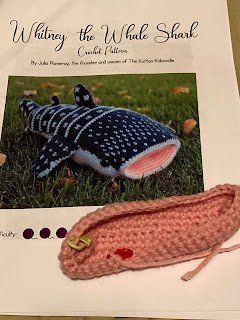 I love the way the mouth pushes into the face of the whale shark. I added a few stitches to keep the mouth open without any sagging down. 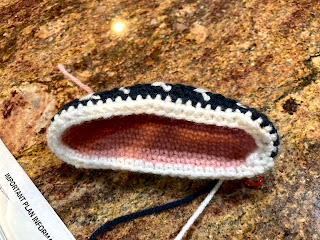 If you compare my Whitney to the original one, you will notice that mine is a bit shorter and is missing two stripes. I got confused on my count and just persevered and fixed it as best as I could. I think it still turned out fantastic! I was very surprised that I was able to complete it and it turned out so well. The pattern is easy to follow. I think if I were a more experienced crocheter, it would have turned out to more closely match the original. 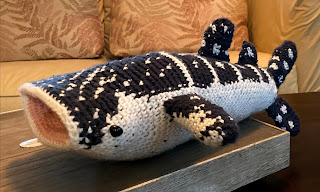