Boogs' lunches are inspired by the books we read at bedtime the previous evening. Each night, Boogs reads one book to me and I read a book or a chapter of a book to him. I usually post his lunches once a week. Click on the "lunches" label at the end of this post to see lunches from previous weeks.

Mercy Watson Goes For A Ride by Kate DiCamillo 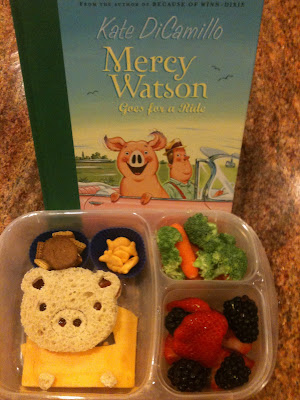 Boogs received a boxed set of Mercy Watson books for his last birthday. We love to read them over and over. Mercy Watson sure can find a way to get in and out of trouble. In this story, she ends up driving a car while the police are chasing her. Boogs laughs every time he reads this. Mercy Watson also really likes buttered toast and eats it in every story. In the ELB lunchbox: pb&j CuteZcute pig driving a cheese car, Chex Mix for buttered toast, crackers, carrots, broccoli, and berries.


Anansi Does The Impossible retold by Verna Aardema
Anansi the spider is upset that the Sky God holds all of the stories. He climbs up to the Sky God and makes a deal with him to buy his stories. Anansi must accomplish three impossible tasks to buy the stories - 1) bring a live python to the Sky God, 2) bring a live fairy to the Sky God, 3) bring 47 stinging hornets to the Sky God. Anansi decides that he can manage these tasks. With the help of his wife, he is able to trick the python, fairy, and hornets. The whole village rejoiced. In the Laptop lunchbox: ham & cheese Anansi spider, cheese stick python, grape hornets, Pirates Booty, and salad. 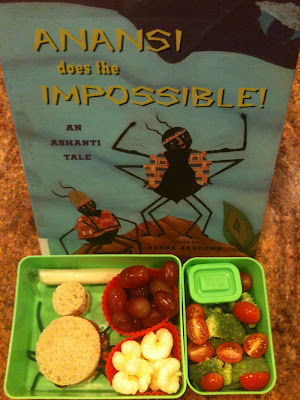 No Frogs for Dinner by Frieda Whishinsky
Melvin could not wait to visit his Aunt Rose in the big city. He dreamed and planned of all of the things he wanted to do. Unfortunately, his Aunt Rose had also planned what to do. Instead of eating pizza and hotdogs at a huge stadium while watching baseball, Melvin had to accompany his Aunt to the opera and to several museums. She also served him things to eat that he did not like - sushi, oysters, and oatmeal with stewed prunes. When Aunt Rose told him they were having frog legs for dinner, Melvin had to speak up. Boogs has eaten frog legs with my mom. He thought they tasted good and he could not understand why Melvin would not want to eat them. Boogs did say that sushi and oysters were disgusting but he would "let" me fix him shrimp for dinner. In the ELB lunchbox: ham & cheese skyscraper, marshmallow baseball, pb&j CuteZcute frog sandwich, kiwi, and veggie chips. 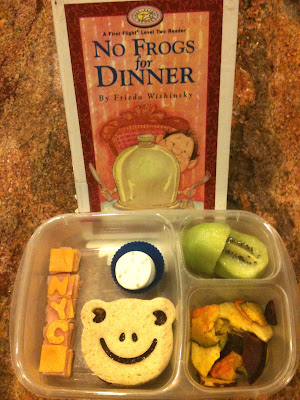 The King of Ireland's Son by Brendan Behan
The King of Ireland sends his three sons out into the countryside to find the source of some heavenly music. The two older brothers tricked Art, the youngest son, into going down into a deep hole. Art persevered through this challenge and eventually found the source of the heavenly music. With the help of a fierce stallion, he was able to outsmart a giant and bring the music home to his father. Boogs said it reminded him a little bit of Jack and the Beanstalk. In the ELB lunchbox: pb&j stallion with Babybel Art hiding behind him, Chex Mix, yogurt, veggie pancake, and blackberries as dark as the tunnel Art journeyed through to find the music. 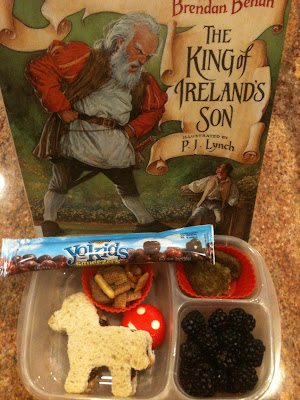 The Lonely Book by Kate Bernheimer
When a brand new book arrived at the library, everybody wanted to read it and check it out. As time passed, the book became less popular and more lonely. It's cover became worn and the last page of the book was torn out. Then, Alice found the book and loved it. This is a story for book lovers to treasure. While we were reading this story, Boogs was really sad about the lonely book. He decided that he needed to take out all of the books on his bookcase and at least read their covers so they would not be lonely books. The illustrations in the book are beautiful. In the Laptop lunchbox: pumpkin muffin "mushroom" with fairy drawn on cheese for the lonely book's cover, salami, tomatoes, raspberry & blueberry fairy heads, and carrots with ranch dressing.


Be sure to check out the wonderful sites I link to on my sidebar! If you want to see more book inspired lunches, click on the "lunches" label at the end of this post or go to My Story Themed Lunches board on Pinterest. I would love for you to leave a comment to let me know you stopped by.
Posted by Keitha at 5:39 AM