Boogs and I often make up stories. Every once in a while, Boogs will ask me to write down the story he tells. He draws the pictures to go with the story and then we make little books out of them. We read David Kirk's book Nova the Robot: Nova's Ark. It is about a robot who goes on an adventure in space and makes animal robots from the wreckage of his spaceship. After the story, Boogs and I drew our own robot animals and then Boogs decided to tell a story about our robots. So, here is his latest mystery story:

Once there was a robot town. Invisiby robot was slithering along. He went up a hill, over a bump, down a hill, jump, slide, and then go down. The robots are trying to find the mystery of the flying dragon who scooped up a penny. He dropped it into a bird's nest and the bird dropped it into a volcano. The volcano was almost about to explode while the penny was still in there. The volcano was on the other island. They were trying to get there in time. The volcano shot fire rocks and then stopped. The robots got closer and then the next eruption started, a little hot lava. Then the next eruption was about to start but they got close enough to save the penny. The mystery is the robots trying to find the coin. They found it. The End.

Here is a picture of Rowby the Robot kicking a fire rock: 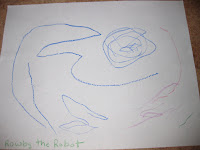