The 4th day of our Cozumel  vacation was a very long and interesting day. We had to leave our resort at 6:10 to catch the 7 a.m. ferry to Playa del Carmen. When we were in Playa del Carmen on our 2nd day of vacation, we booked a 12 hour bus tour to visit Chichen Itza. The tour included a visit to a Mayan crafts village, a stop at Cenote Suytun, a traditional lunch at a Mayan restaurant, a guided tour of Chichen Itza, and a stop at the colonial city of Valladolid. Boogs said this is the day of our trip he enjoyed the most. He was fascinated by the Mayan ruins and the information he learned about Mayan culture.

Luckily for us, the day started out with sunshine instead of rain. We rode on the top, outside area of the ferry for our crossover to Playa del Carmen. A guide picked us up in a van at the ferry dock. He drove us to a shopping mall where we checked in with several tour groups. They were very organized and separated people onto buses according to which resort/area they were staying. This made it faster for drop-offs at the end of the day. 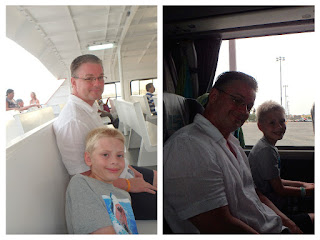 Boogs was happy with his window seat on the bus. Our guides, David & Selena, were wonderful. David talked about Mayan history and current culture. David was a stellar tour guide - funny, informative, organized, and passionate about Mayan culture. 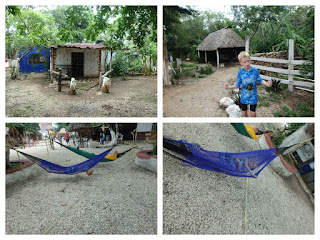 Our first stop was at a Mayan crafts village. There were several huts where people were selling food, selling souvenirs, and giving blessings. My husband bought an obsidian good luck Mayan statue. Of course Boogs had to spend time in the hammocks. 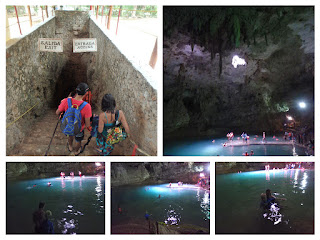 After walking through the craft village, we headed to Suytun Cenote. We were told that in Mayan times, the cenote was a sacred place. You had to walk down a couple of steep sets of stairs to get to the water. Boogs was a little nervous about getting in the water because of the blind black fish. He thought they might bite him. We did not realize you have to rent life jackets in order to swim. My husband and Boogs swam for a little bit before they were asked to get out of the water. The water was cool and calm. I wish I could have taken a picture that did justice to the beauty of this cave. It was gorgeous. 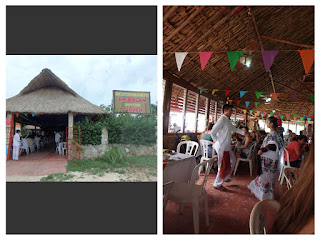 Our next stop on the tour was lunch at a restaurant that they said served "authentic" Mayan food - lime soup, pork in tortillas, chicken, rice, refried black beans, and dessert. The food was good and we were hungry by that point of our day. Two couples danced while we ate. It is difficult to see in this picture, but they were balancing glasses on their heads while they danced. 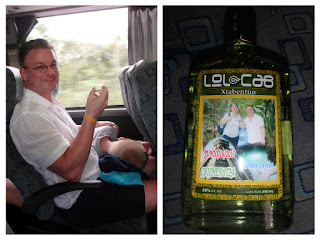 The bus tour does try to steer you toward some specific souvenir purchases. They took pictures of everyone on the bus at our first stop. Then later, they offered to sell you these bottles of Mayan alcohol with your own picture on them. I thought it was a clever sales pitch, but we did not buy it. Boogs took a nap on the bus. 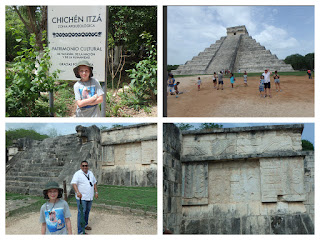 Our next stop was the Chichen Itza ruins. David guided the tour for English speakers while Selena guided a tour for Spanish speakers.  David skillfully told us the history of the main temple. He drew diagrams in the dirt with the point of his umbrella to explain the mathematics, symbols, rituals, societal structure, religious beliefs, and many more things about Mayan history. Boogs was amazed and decided he wants to do his 4th grade independent research project on the Mayans of Chichen Itza. 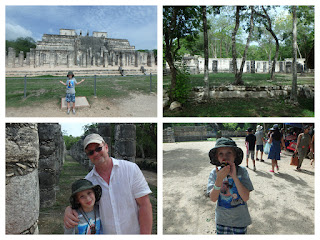 The tour with David lasted a little over an hour. Then, we had about an hour and a half to explore other parts of the ruins on our own. We could have spent all day just at the ruins. 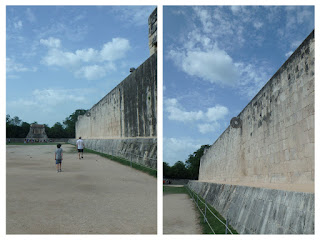 If you go to Chichen Itza, I highly recommend spending some of your time there with a guide. We would have missed out on so much if we had only gone exploring on our own. 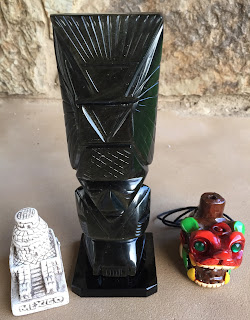 Our last stop on the tour before returning to Playa del Carmen was in the colonial city of Valladolid. David explained that many of the stones used in the oldest buildings in the city were taken from Mayan ruins. This was a short stop on the tour to give people a chance to stretch their legs, see the city square, and shop. 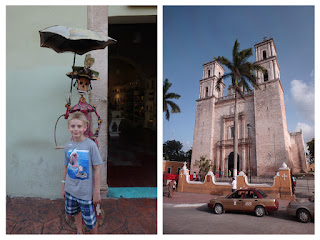 We made it back to Playa del Carmen in time to catch the 10 p.m. ferry to Cozumel. It was a long exhausting day, but well worth it.