Arrr! Talk Like A Pirate Day Lunch and Blog Hop 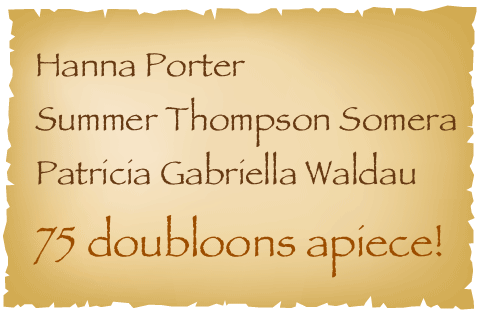 Arrr! Shiver me timbers tis time for 'nother bento lunch hop. So set your sheets to the wind and sail along through the galley to spy the treasure map clues and some fancy pirate grub.

Okay... Tis plain English I shall speak. My bento lunch making friends are joining together for a blog hop in honor of Talk Like A Pirate Day. Our previous hops have showcased some amazing lunch creations. This time, the hop will also include some treasure - a giveaway! So grab your pencil if you want a chance to win the treasure. Each blog in the hop will have a map scrap with a letter for you to collect. When collected and arranged in numerical order, 37 map scraps will give you the URL for entering the giveaway and 2 bonus pieces with words on them will give you 2 chances to win. My map scrap is located at the bottom of this post. Be quick to set your sails as the giveaway ends Sunday, September 23rd at midnight EST.

Lunches for my son, Boogs, are inspired by the books that we read.

Henry & the Buccaneer Bunnies by Carolyn Crimi
Henry's dad, Captain Barnacle Black Ear of the Salty Carrot, is not pleased with his book-loving son. He wants Henry to be a fierce pirate instead of wasting his time with books. Henry's book reading saves the pirates after the Salty Carrot is destroyed in a terrible storm. Henry uses knowledge learned from his books to help the marooned pirates build a two-story hut, plant food, cook meals, and build a new ship. By the end of the book, Captain Barnacle Black Ear realizes the importance of reading.  Boogs really enjoyed this book and was excited to eat his ring pop treasure. I made this lunch for him over the weekend. The ring pop was a special treat that would not be included with a lunch for school. 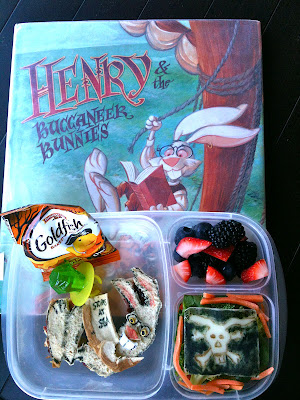 In the ELB lunchbox: pb&j Pirate Henry reading "Storm At Sea" pita chip book, pirate Goldfish, cheese rabbit jolly roger flag on top of a salad, berries for the color of the sky during the storm, and a Ring Pop pirate treasure. 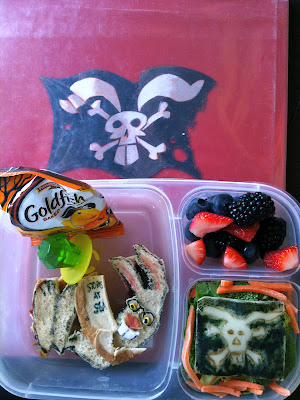 A Pirate's Guide To First Grade by James Preller
Boogs fell in love with this book. It tells the story of a boy's first day of first grade. The boy is illustrated in full color and there are a crew of ghostly shadow pirates following him around throughout the day. Each page is written in pirate speak. There is a glossary at that back of the book for translating pirate speak to English. When getting ready for school, the boy went "down in the galley, I mashed me choppers on grub and drowned it with grog. Time t' set sheets to the wind!" Boogs had fun trying to understand what was being said. At the end of the school day, the boy's teacher handed over a map marked with an X for the boy to find his treasure for having a great first day. Boogs and I tried to predict what the treasure would be. Turns out, the map was a pass to the library. The last page shows the boy absorbed in reading Treasure Island while the shadow pirates cheer him on. In the  ELB lunchbox: fruit leather Jolly Roger, cheese & nori school bus on top of an almond butter & jelly sandwich, pita chip book, gold pieces of mango, and salad. Boogs told me that pirates say "Aarg" not "Arrr!" So we went with his suggestion for the letter picks in the broccoli. 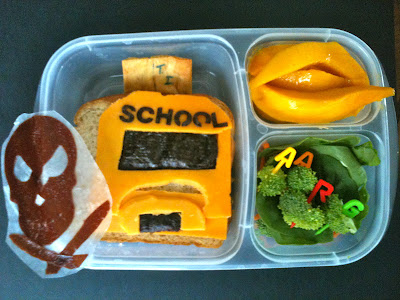 We read this book several times. Boogs asked for a magnifying glass to get a closer look at what the shadow pirates were doing. He tried using the pirate telescope sitting beside his elbow, but it did not work out like he hoped it would. 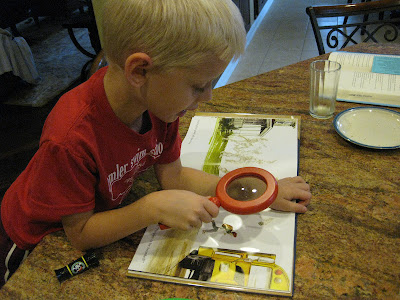 This here's my piece o' the map! Good luck on the giveaway, Maties! After you've written down the letter and number, sail on over to Lunches Fit For A Kid or click on the Jolly Roger flag at the top of this post to continue on ye merry treasure hunt adventure. Arrr!