Boogs' lunches are inspired by the books we read at bedtime the previous evening. Each night, Boogs reads one book to me and I read a book or a chapter of a book to him. I usually post his lunches once a week. Click on the "lunches" label at the end of this post to see lunches from previous weeks.

Boogs is such a sweet boy. One morning this week, he was watching me get a lunch ready and he said, "I've never seen a true artist at work. Your lunches are works of art." He brings me silly smiles all the time.


The Mystery of King Karfu by Doug Cushman
Boogs loves to figure out a good mystery, especially when you have to crack a code to discover hidden treasure. This picture book has it all. A mysterious person stole the Stone Chicken that belonged to the Ancient Egyptian pharaoh King Karfu. The chicken held the clues to finding King Karfu's hidden treasure. Seymour Sleuth, the wombat hero of this story, carefully lays out the evidence against each of the suspects. It is up to the reader to follow the evidence to solve the mystery. The author even threw in a "red herring" to throw us off track. I helped Boogs decode the secret message. He said, "I think we should take this decoded secret message to Egypt so we can find the treasure. No, wait a minute. We can't do that. We might die in the hot Egypt sun." When we went to the library this week, we had to check out the other Seymour Sleuth mystery - The Mystery of the Monkey's Maze. In the Laptop lunchbox: strawberry red herring, salad, pb&j Seymour Sleuth, cheese Stone Chicken, dried apple "cookie crumbs", and trail mix representing the crumbly walls inside the pyramid. 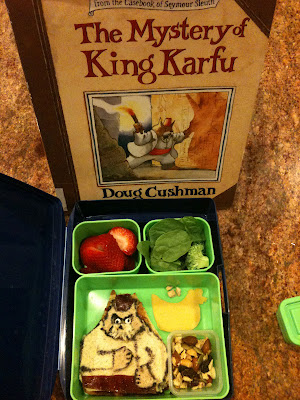 In One Ear, Out The Other by Michael Dahl
I admit it, I have said this phrase to my son many times. In this story, a little 3-eyed monster lets everything he hears go in one ear and out the other. He is too busy climbing, falling, swimming, shouting, hiding, running, sleeping, etc to listen to what others say. This caused him a few problems. For instance he answered a math test question, 2+2, with the answer 'France'. The little monster almost missed out on the big party because he did not listen. He decided to stick a sock in his left ear to keep the words in and it worked. Boogs thought that was hilarious! In the ELB lunchbox: 3-eyed monster made of hot dogs baked in a cornbread muffin, "2+2=France" written on his flat bread ear, boiled egg, cottage cheese for potato salad, grapes, broccoli, and salad dressing in a Mini Dipper.

The details for these two pirate story lunches can be found HERE. I put them in a post on Wednesday for International Talk Like A Pirate Day blog hop. 39 blogs showcased pirate lunches and linked together for a megahop with a chance to win some pirate treasure until Sunday, 9/23. 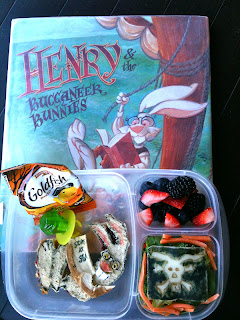 Ten Wishing Stars by Treesha Runnels
We actually read a book about the Dewey Decimal System. I was not feeling creative enough to turn it into a lunch, so I asked Boogs if he could pick out one of his favorite old stories for me instead. He read Ten Wishing Stars to me. It is a cute little count-down-to-bed book about sheep making wishes and getting what they want. In the Laptop lunchbox: ham & cheese sheep with "WISH" alphabet picks, star kiwi, star Babybel cheese, raisins with star dried apricot, salad with star cucumbers. 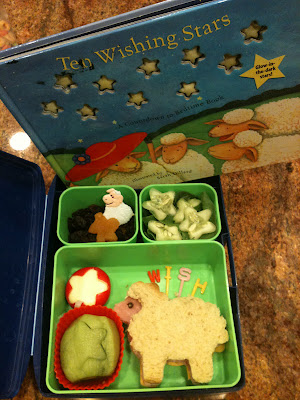 The Runaway Wok by Yin Chang Compestine
Boogs really liked this story. He said it reminded him of The Magic Dreidels by Eric Kimmel. I thought it had a bit of Jack & the Beanstalk in it. Ming is instructed by his mother to sell some eggs for a bag of rice. Ming meets an old man who offers to trade the eggs for an old rusted wok. The boy is unwilling to make the trade until he hears the wok sing to him. After Ming makes the trade, he heads home to his mother. The wok magically helps Ming's family have a perfect Chinese New Year celebration. Boogs and I discussed the many ways the wok moved in the story. The wok rolled, briskly hopped, skipped, jumped, trotted, galloped, spun, scooted, slid, and sped off. Boogs and I tried out each of these ways to move across his playroom. I think he liked rolling the best. At the back of the book, there is a recipe for Festive Stir-Fried Rice. I asked Boogs if he would like some in his lunch, he told me he would prefer Cilantro Rice and Black Beans. In the Laptop lunchbox: Cilantro rice & beans pretending to be fried rice, carrots, Momables meatballs, golden cheese coins, mixed berries, and a small container of ranch dressing. 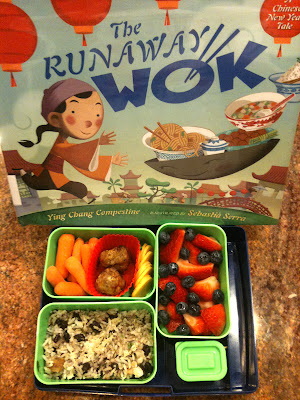 Happy Blogiversary to Bento Blog Network! If you have not visited Bento Blog Network, you are missing out. Diana has a new bento theme each week, a friendly competition, and wonderful tutorials. I stumbled across her site when I began making bento-ish lunches for Boogs last Fall. She has brought a whole community of bento makers together to share our love of cute lunches. Thanks, Diana!

Be sure to check out the wonderful sites I link to on my sidebar! If you want to see more book inspired lunches, click on the "lunches" label at the end of this post or go to My Story Themed Lunches board on Pinterest. I would love for you to leave a comment to let me know you stopped by.