I was planning on having an elf come stay at our house for the month of December, but my nosey little Boogs made him arrive a few days early. I wanted to get Elf on a Shelf but I did not like how the story said a child can never touch the elf or the $35 price tag. So, I bought an elf at Hobby Lobby for $7, a Christmas bucket, and wrote a letter (some of the content was "lifted" from The Magic Elf website) to attach to the top of the bucket. 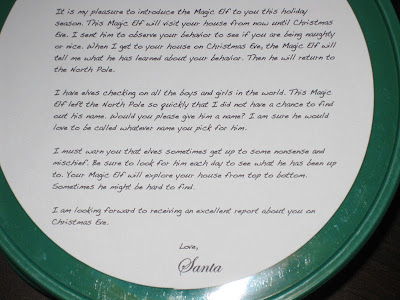 I put the bucket on a shelf in my craft room and was going to put it in front of Boogs bedroom door on Dec 1st. Unfortunately, Boogs came in my craft room Saturday morning while I was making Christmas cards. He immediately noticed the bucket, took it down, and asked "Momma, what is this?" Grrrr! At least I had already attached the note and the elf was inside. I told Boogs I had no idea what it was or where it came from. He went and asked his Dad about it. His Dad noticed the note on top of the bucket. Boogs saw his name on the note and asked us to read it to him. He was so funny. He was very nervous about opening the bucket. I wish I had gotten a picture of Boogs standing behind the bucket, tilting it away from himself, and looking kind of freaked out. After he took the top off he was surprised that the elf was still. He thought the elf was going to jump out and run around. Boogs loved that the elf might get up to some nonsense and mischief. He said the elf was so cute that he would name him Cutesy. Throughout the day, Boogs would move Cutesy to different areas and then tell me Cutesy had moved by himself. Boogs wanted to know more information about elves. I found a website that we read together that was pretty good, as long as you skip over info about The Hobbit type of elves. There is a video running at the bottom of the screen, I just kept the screen from going down that far while Boogs and I read the elf info.
http://people.howstuffworks.com/culture-traditions/holidays/santa-elf.htm


In the afternoon, Boogs accidentally pulled the jingle bell off the top of Cutesy's hat. I sewed the bell back on and decided to leave my needle and thread out for Cutesy. This is what Boogs found when he looked for Cutesy this morning: 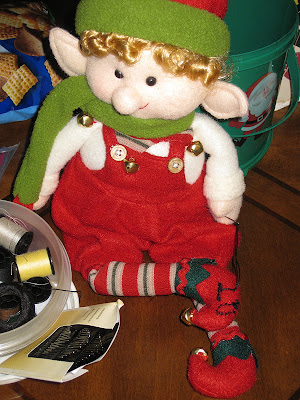 
We can't wait to see what other adventures Cutesy will have before he leaves with Santa on Christmas Eve.
Posted by Keitha at 11:47 AM