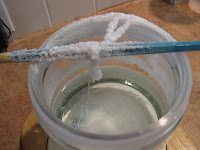 Our salt crystal experiment is coming to an end. The crystals grew quite a lot.  My husband asked that it be moved out of the kitchen. It has been sitting on the counter for a few weeks. I am dumping it out because the crystals are growing in a glass jar and I am worried that the jar might get broken if placed somewhere else in the house. 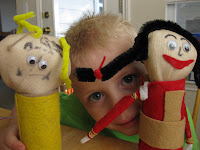 Our puppets have been busy acting together. Boogs' alien is starting to loose his antennas. I am sure we will make more puppets soon. We need to get another play recorded so we can show it to Grandmaman. We had a lot of fun with the last one about the runaway cookie jar people.

Boogs' has one more week of earning coins for his chore chart before he can go get his Hot Wheels Dinosaur Track. He is going to use Aunt Joanne's birthday money and his chore money to purchase it. I still love the chore chart. We were at the store the other day and Boog's wanted a Spiderman Pez. I told him he could get it if he used his own money. He quickly decided that he did not really need it.
Posted by Keitha at 7:57 AM