Last week for two of our science experiments we used Dixie cups. The first experiment was about freezing water. We filled up a cup of water and marked the water level on the cup. We wanted to see if the level would be higher or lower after freezing. Boogs liked the experiment but he also wanted to smash it up. So he put on safety googles got a hammer and went to work. He said that next time we do this, we should hide treasures in the ice. 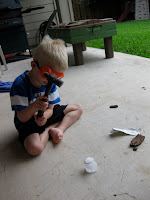 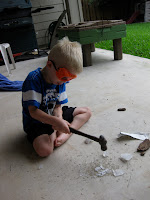 The second experiment was to make a Bug Trap. We dug a small hole in the yard and put a Dixie cup in it. We put a little bit of fruit at the bottom of the cup to attract bugs. Boogs hypothesized that a ladybug would go in the cup because they like fruit. We looked at the trap after about an hour and the only bugs in it were ants. Boogs said the trap did not work because the ants could climb right out. 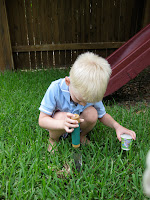 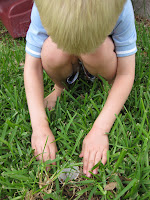 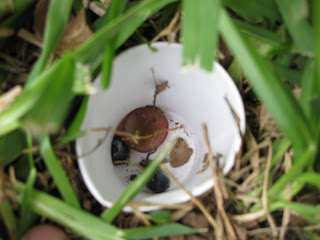 We left the cup in the yard overnight. Unfortunately, it rained and we decided we would have to try an overnight trap again on a dry night. Boogs' wrote a few words in his journal about his experiments.
Posted by Keitha at 8:42 AM