We woke up so cold on our second morning at Grant Campground in Yellowstone National Park that we had trouble making our fingers work to pack up our campsite. We got everything and everyone in the car and then set out on our trip across Wyoming to South Dakota. Unfortunately we made a wrong turn. We realized our mistake fairly quickly and only had to back-track about half an hour. The Fisherman's Bridge area of Yellowstone National Park is gorgeous. If I ever make it back to Yellowstone, I would love to spend a week in one of the cabins near Yellowstone Lake. After several hours of driving and a stop for lunch we made it to South Dakota! 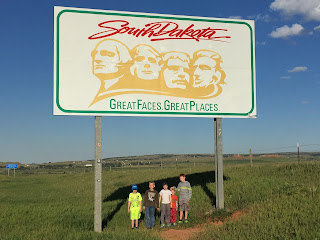 It was interesting to drive into South Dakota. The 75th Annual Strugis Motorcycle Rally was scheduled to begin a few days after we arrived. It was an amazing sight to see 60 motorcycles driving in a long line on the highway. Motorcycles were EVERYWHERE.

We made it to Kemps Campground well before dark. It was nice to set up camp in the daylight. By that point in our trip, we had decided to stay all in one tent. There were groups of bikers camped at Kemps. You could hear their motorcycles coming and going well into the night. One guy I talked to said that by the end of the weekend they expected about half a million bikers to journey to Sturgis and the Black Hills of South Dakota. We ate dinner, made smores, and then went to sleep. 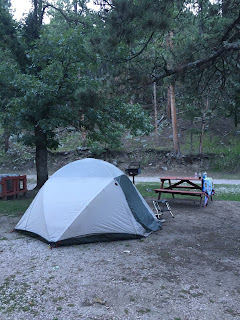 The boys were up early the next morning. They had a serious Pokey ball competition to play. I have no idea what the rules were because it was a game the boys made up. They looked like they were having fun. 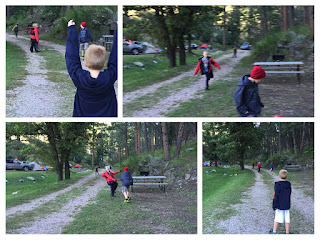 Kemps Camp had a washer and dryer for public use. We stayed around the campsite while we caught up on laundry. Kemps also had free showers!!! We all showered two days in a row. The boys climbed the mountain across from our campsite while we waited for the laundry to finish. We told them to stay where they could hear us. About 15 minutes after they left, I yelled for them and no one answered. I went up the mountain looking for them. Whew was it steep. I think those boys are part mountain goat. I finally caught up with them. I could not believe how high they had climbed. They were a little sad that I had spoiled their fun. 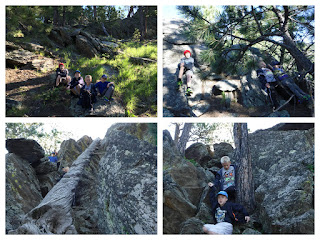 Do you see that tiny little light green spot right of the center of this photo? That is the train that ran behind the campgrounds. It looked so small from where we were. 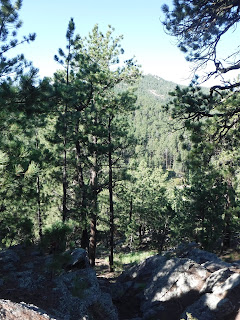 Here is a closer view. 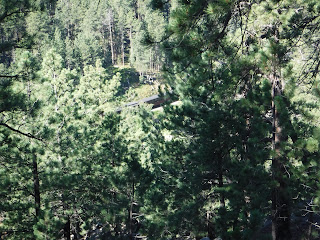 The boys scampered back down without any problems. I was the only one who was sliding and worrying about dropping off a boulder. 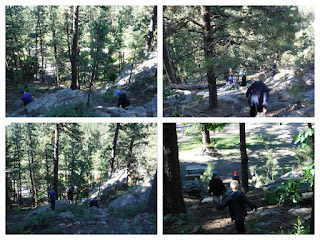 Around 10 am we were ready to head out for the day's adventure. We went to the Borglum Historical Center in Keystone to learn more about the sculptor who made Mt. Rushmore. Boogs and I read a couple of books about Mt. Rushmore in preparation of our trip. It was neat to learn more about Gutzon Borglum and his work. Did you know that he also helped design the flame on the Statue of Liberty?

Our next stop after the Borglum Historical Center was Mt. Rushmore.