The drive from Hasty, Colorado to Yellowstone National Park, Wyoming was absolutely beautiful! 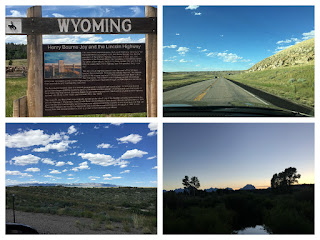 There were parts of the drive where the land was flat as far as you could see with a huge blue sky. Parts of the drive were so curvy we had to drive 10 mph to navigate them. It was a long day in the car, but the boys (all five of them) were excellent on the drive from Colorado to Wyoming. There were thousands of horses along our drive across Wyoming so there were some really high scores for the Horse Game (I wrote about it in my last post). Another game we played in the car to pass the time, is the Name Game. I used to play it on car trips with my family when I was growing up. For this game, everyone chooses a new name. If someone calls you by your old/real name they have to remain silent until someone calls their new name to release them from their silence. Does that make sense? It was hilarious listening to the boys choose their new names. The 4-yr-old (J4) kept changing his name every few minutes - lightning master, lightning monster, trasher, and many others I can't remember. The names of the other boys were: J2-Klein, J3-Master Vine Shark then later Horn Head, J1-I don't wanna play (yes we did call him this every time we spoke to him until he came up with a name) Black Star, Boogs-Toaster, Me-Pumpernickel, D-Belle. There were many moments of blissful silence due to the Name Game. What kinds of games do you play on long car trips?

The sun was still shining when we thought we were almost through with our drive. We only had to make the turn off into Yellowstone National Park and then make our way to our campsite. As we approached the entrance to Yellowstone, we were waved away by Park Rangers who had blocked the road. They told us there had been an accident and we would need to take a detour. It turns out the detour took us about an hour-and-a half out of our way. We had to drive in through the road for Grand Tetons National Park to access Yellowstone. 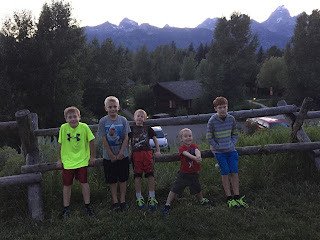 Most of the boys were still smiling when we took a stretch break near the entrance to Grand Teton National Park. We got back in the car just as it started to get dark, a little before 9 pm. It took an additional two hours of winding through the forest to reach our campsite. There were times when we were stuck behind RVs going 20 mph. We almost hit an elk around one turn. This huge elk with a fantastic set of antlers stepped out of the trees directly onto the road in front of our car. I managed to stop without hitting the elk or having the car riding my bumper hit me. The elk walked partially across the road, turned looked straight at me for a couple of seconds, then walked right back the way it had come. Weird!

We set up our tents in the dark while the boys were still sleeping in the car. There was barely space for the two tents between the trees. It wasn't until the next morning that we got a good look at our campsite. We had wedged the tents in the only available space. It worked. 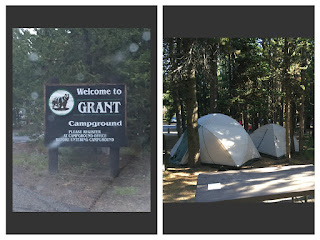 When we got ready to eat breakfast the next morning, we realized we had forgotten to pack bowls. Duct tape to the rescue. I fashioned some paper plates into bowls with the duct tape. They worked just fine for holding oatmeal. 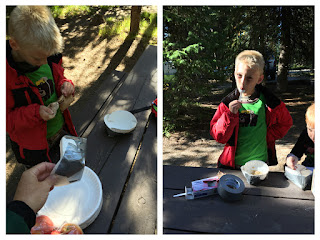 It was about a 40 minute drive from our campsite to the Old Faithful geyser site. We stopped for a little hike on the way. We could see some elk far off in the distance. The sun was shining and it looked like it was going to be a great day. 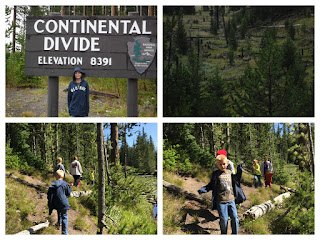 On our trips, the boys like to collect Junior Ranger patches at National Parks. We worked on our Jr. Ranger booklets while we waited for Old Faithful to erupt. It was so crowded around Old Faithful that we could not get very close for a good picture. The boys didn't mind, they had fun playing with some fallen tree logs. 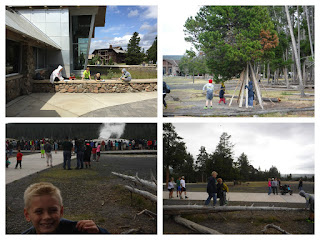 We watched a short film and wandered through the exhibit hall at the visitor's center. We ate lunch at one of the cafes. Then the weather started to turn. It quickly became cloudy, drizzling, and dreary. We had to stop by the gift shop to buy a few jackets. The weather was so nice that morning that we had left our heavy coats at the campsite. The boys needed to participate in a Ranger led activity to earn their Jr. Ranger patch so we walked to the upper basin area to join a Ranger for the Geyser Discovery Tour at 4 pm. Watching Castle Geyser shoot water and steam into the air was amazing! 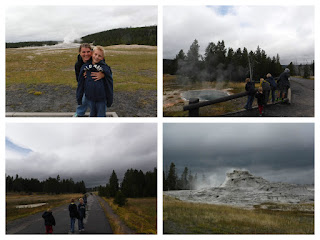 There was a path next to Castle Geyser where the boys could run through the spray. Probably not the best choice on a day like we had, 43 degrees F with a strong wind. The boys came back with their wet hair plastered to their foreheads and their jackets damp. 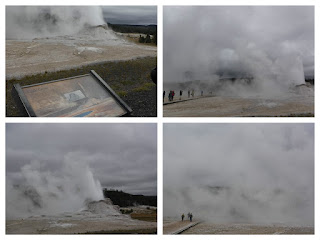 I highly recommend taking the Geyser Discovery Tour with a Park Ranger. It was so interesting to learn about the different temperatures of water in the pools which cause the different types of bacteria to grow which causes the different colors to show up within the pools. The Ranger told us if you fell into one of the pools you would be cooked like a chicken because the water temperature is so hot. The boys stayed on the hiking path. Yay! We saw a lot of bison droppings while on this tour but did not see any live bison. 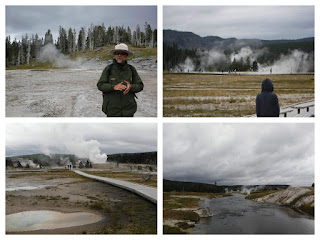 As the tour went on, the temperature continued to drop and the wind began to blow harder. About an hour into the tour, I had my jacket open around Boogs with three of the J-boys huddled around us. We looked like we were in a penguin huddle trying to keep warm. The Ranger took pity on us and signed the boys Jr. Ranger books without making us complete the rest of the tour. We hustled back to the visitor center area to get warm. Look at that sky! 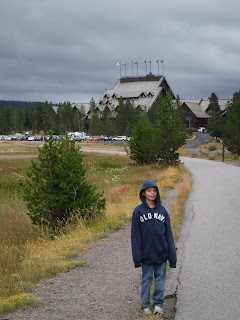 It started to sleet on us before we made it all the way back to the visitor center area. We stopped at one of the little cafes for some hot chocolate to warm us up. 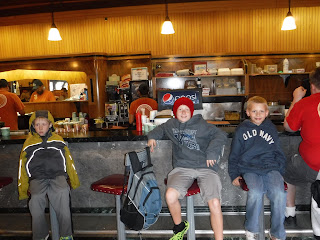 While we were enjoying our hot chocolate it started hailing. Wow, that was unexpected. D took an umbrella and went to get the car so the boys would not have to walk in the sleet/hail. She was gone for almost an hour. The parking lots are connected in various one-way directions. She had trouble finding a way to get over to the cafe where we were waiting. The boys finished up their Jr. Ranger booklets just in time to turn them in before the visitor center closed. They were happy to turn in their books, say the pledge, and receive their new patches. 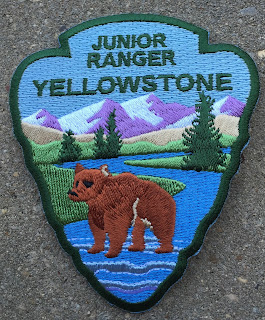 As we left the Old Faithful area to head back to our campsite, the sky lit up with a rainbow. Pretty cool! The boys begged us to try and find the end of the rainbow so we could find the leprechaun's gold. We kept driving. 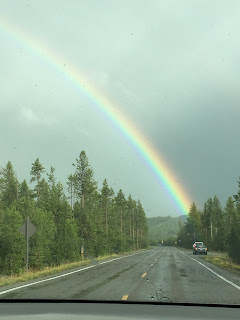 Unfortunately, the weather did not get any better. When we got back to camp, we put the boys in the big tent while D and I held umbrellas over our campfire to cook hot dogs for dinner. It was very comical. Our tongs had been crushed in the car and we lost one of the hot dogs when it rolled into the fire. After we served the boys dinner in the tent, we all huddled in one tent and went to sleep. It got down to 28 degrees overnight. There was frost on the tent when we woke up. During the night, something hit my car and caused the alarm to go off. Then something brushed against two sides of our tent. It freaked me out a little bit. Luckily, the only bears we saw were on the side of a hill when we were driving.

I will get to part 3 of our road trip - Mt. Rushmore - another day.
This post is linked to: