We left Kemps Campground in South Dakota around 9 am to continue on our road trip to our next stop - Pikes Peak in Colorado. It was a long day in the car. D and I actually discussed getting out the Benadryl and making a few sweet boys take a long nap. We would never actually do that, but at times it was fun to imagine it. The amazing weather in Keystone, South Dakota had spoiled us. The weather prediction for our next camping site in the Pike & San Isabel National Forest showed overnight temperatures in the mid 30s with a 50% chance of thunderstorms. On last year's trip, we were in thunderstorms every night but the temperature stayed above 60 degrees. We just could not face the low temp and rain prediction so we wimped out and got a hotel room in Colorado Springs. (Thank you Dear Husband for paying for it!) We were able to cancel our camping reservation and get a partial refund from the campgrounds. 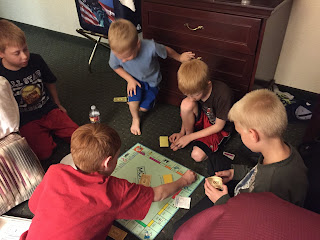 After a snacky dinner from what was left in our ice chest, the boys set up their Monopoly board game. They did not even bother to ask about watching the television in the room. We have trained (brainwashed) them well. We had a comfortable night's sleep and enjoyed the hotel's free breakfast before making the short drive to Pikes Peak. 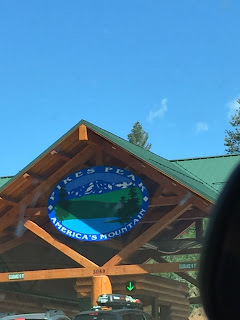 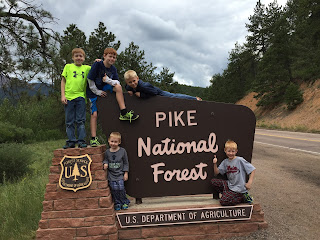 The road to drive to the top of Pikes Peak is kind of scary. It is very curvy and has sheer drop-offs with no guard rails. The higher we drove the more my palms were sweating on the steering wheel. At one point, the road was so steep it looked like we were going to drive right up into the sky. 14,110 feet is a long way up. I think D had the worst ride because the passenger side was closest to the drop-offs and she was at the mercy of my driving skills. Ha! I told her that she was going to be the one driving down the mountain, not me. 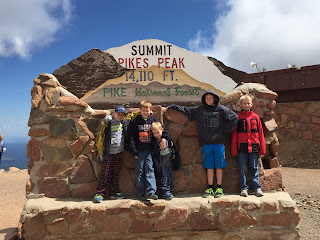 Funny story... an older group of people asked if we wanted them to take a picture of the seven of us with the summit sign. D & I joined the boys on the sign and posed for a picture. Later that day, D was looking through the pictures on her phone and started laughing so hard she was almost crying. There was a picture of us with a finger across the photo and then there was a succession of pictures of the faces of two older ladies looking puzzled while trying to use her camera phone. They had reversed the camera view and had taken pictures of themselves instead of us.

It was a long, hard climb to the top for Boogs. He was gasping for air by the time he reached the summit. Or maybe he was just laying down on the other side of this rock. 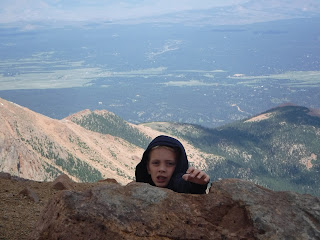 The views from the summit were amazing. We started off in coats, then got warm and put our coats back in the car. A little later, we had to take our coats back out of the car. The weather was changing so quickly up there. There was even a little bit of old snow on the ground. 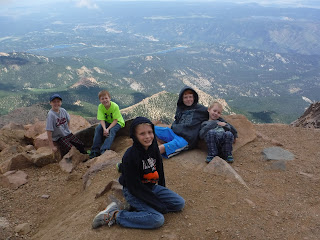 Of course I had to sing America the Beautiful to Boogs while he posed for this picture. 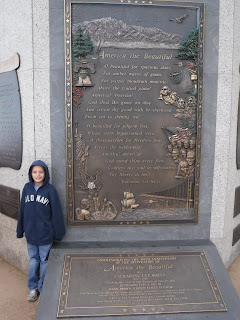 We spent some time in the gift shop at the summit. Everyone chose a souvenir. Boogs had to have a Bigfoot Crossing sign. He plans on putting it on his bedroom door. I bought a baseball style t-shirt. The J-boys picked out necklaces with different symbols on them and D got a coffee mug. 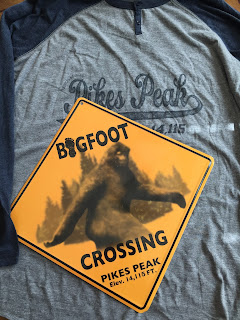 We spent about an hour in the gift shop before heading back outside for another walk around the summit. 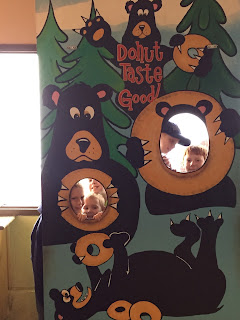 D took this photo of the cog train. The train would have been a neat way to ride to the top of Pikes Peak but it would have cost us $174.00 + car parking fees. The train also takes about 1 1/2 hours each way. No thank you. 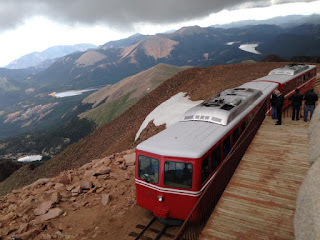 Look at my sweet boy all bundled up with that incredible view behind him. 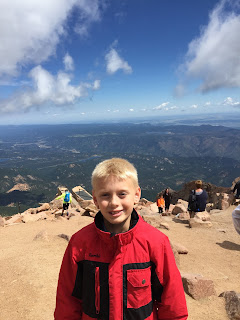 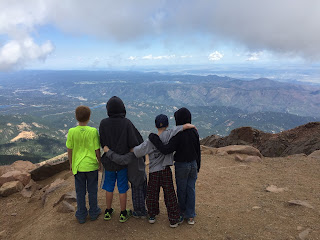 While we were walking around the summit, you could see the dark clouds rolling in. 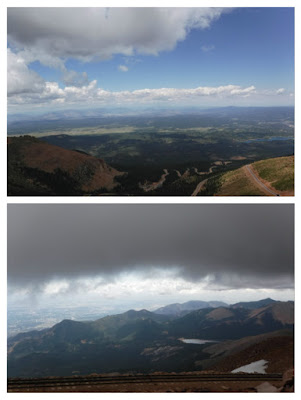 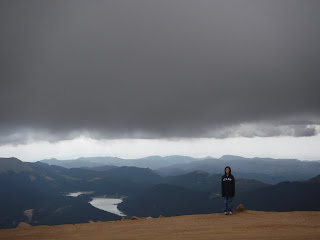 When D felt a little piece of ice/sleet hit her, we decided to head back down the mountain. There was a line of cars coming in to the parking area when we were leaving. I am glad we scheduled our visit for early in the day. I am also very glad that D drove us down the mountain. Look at that winding road. 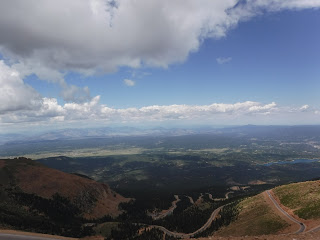 About halfway down the mountain, there is a Ranger Station with a brake check. Every vehicle had to stop and have the temperature of their brake pads taken. If the temperature was more than 300 degrees, you had to pull into the Ranger Station parking area and wait at least twenty minutes for your brakes to cool before continuing down the mountain. Ours had a temperature of 325 so we had to stop and wait. The waiting area was set up very nicely. There was a gem panning water sluice, a gift shop, and several hiking trails. We stayed a lot longer than just twenty minutes. 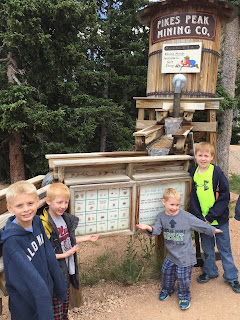 Boogs had a great time panning for gems. We bought some "Mining Rough" from the gift shop. It was seeded with gems. The kids had to wash away the mining rough to discover what gems they found. It was a very touristy kind of thing to do and the boys loved it. 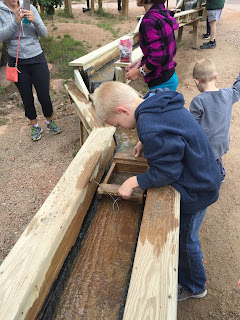 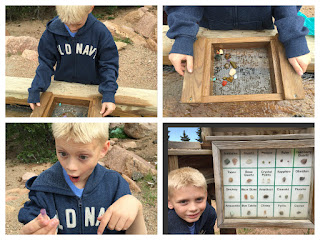 There was a chart showing the kinds of gems/rocks you might find while panning your mining rough. 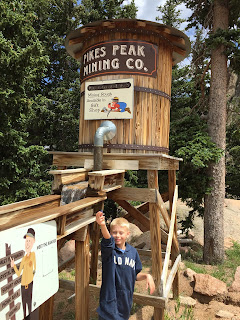 It was so pretty. The sun was shining, the air was pleasantly cool, and the scenery was gorgeous. 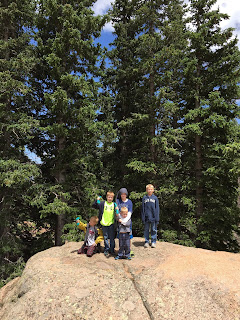 The weather predictions for the area that night were not good. We decided to cancel our scheduled campsite and make as long a drive towards Texas as the kids could handle. Before we got back in the car, we all did jumping jacks, squats, high knees, and a little bit of dancing to burn off some energy. Don't the boys look thrilled with the dancing portion of our group exercise? 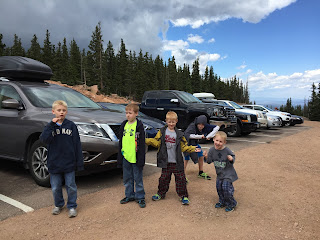 D was able to coast down the rest of the mountain road and save my brakes. Whenever a car came up behind us, she pulled over at the closest opportunity and let them pass. We waited a bit before following so we would not be too close. Some people were speeding up on the straight parts of the roads and then riding their brakes around each bend and curve. Coasting is the way to go! Next stop Texas... well, maybe.