Summer Is Almost Over

We have ten days until school begins. Boogs and I are finding fun activities to do before we are both stuck inside all day.

Last Friday, we went on a family trip to Fiesta Texas. We bought season passes at the beginning of the summer and this is only the second time we have been. The two hour drive to get there is a bit of a deterrent. 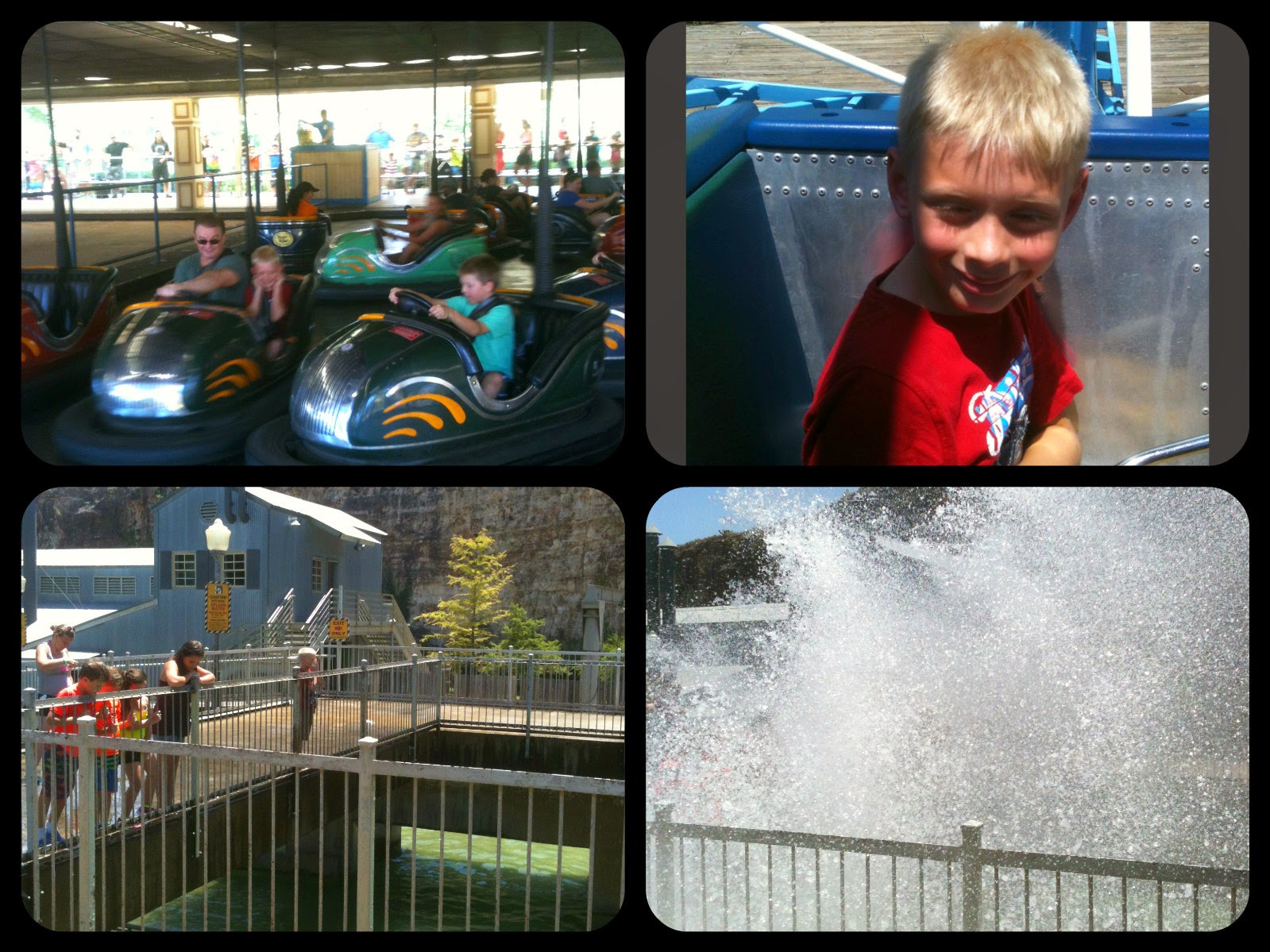 We had a great time. My husband and I were able to ride all of the big rollercoasters. Boogs stuck to the slower rides this time. We were surprised how uncrowded the park was, must have been the 100 degree heat. Boogs kept cool by making sure to get as wet as possible on the water rides. He is actually standing behind that wall of water in the lower right picture above. After several hours of rides, we put on swim suits and spent the rest of the day in the water park.

Boogs just finished up two weeks of diving class. This year he was not quite as brave at diving as he was last year, no forward somersaults off the diving board. I tried to encourage him to try a dive off the high dive instead of just jumping in. He told me he would do a dive if I would. Well... that put an end to that. Boogs has already told me he wants to return to diving class next summer. We spent a little bit of time at the park next to the pool after diving class. We also went swimming several times at various pools this week. Boogs loves being in the water. 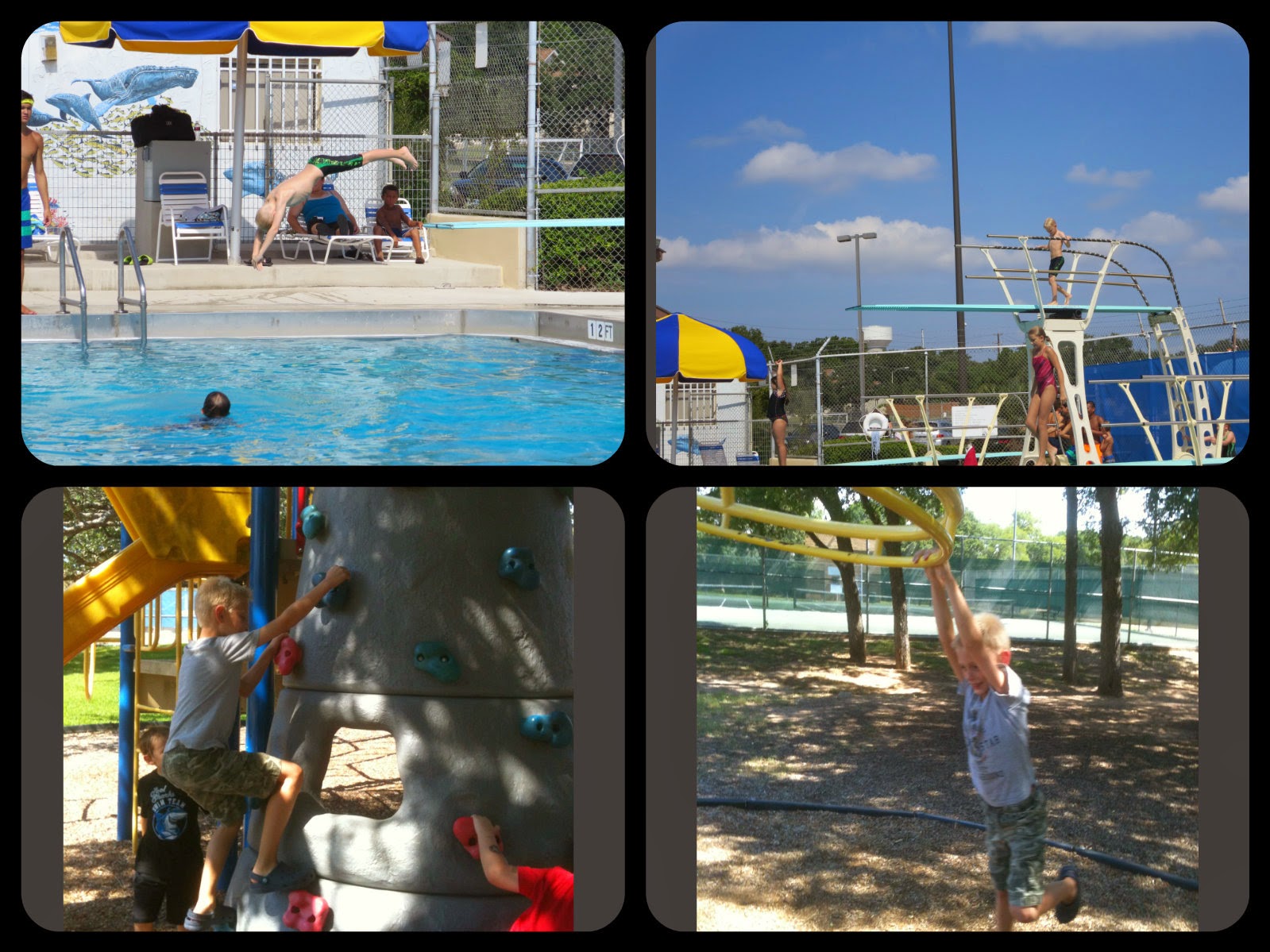 Geocaching at Wilco Park
Boogs and I met the Jboys and their mom at the park at 8 a.m. to try and find hidden treasure. The boys started out excited about finding a geocache but soon asked if they could just explore and play. We spent about three hours at Wilco Park before it became so hot we decided to head home to air conditioner. 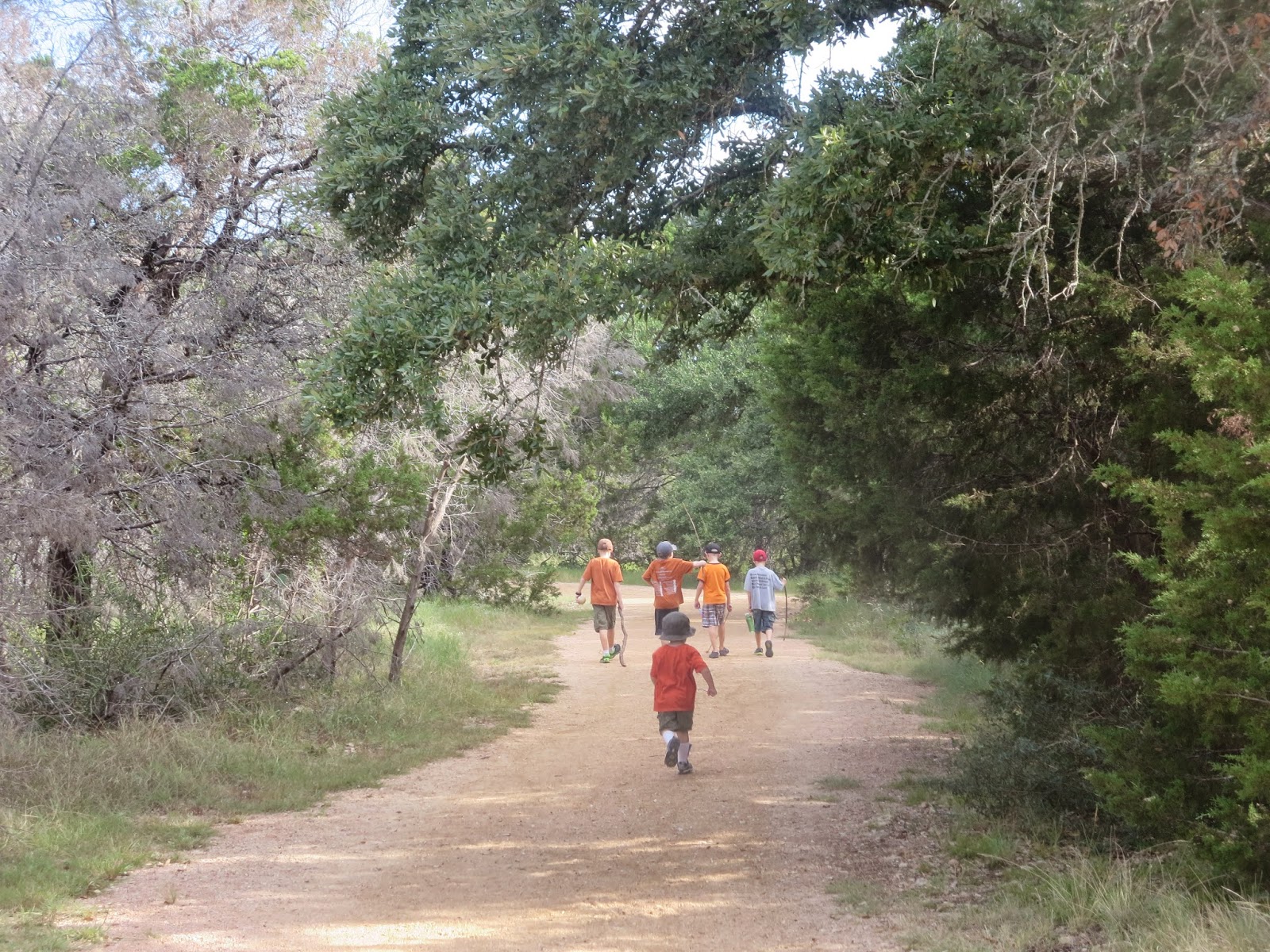 J4 wanted to keep up with the big boys. 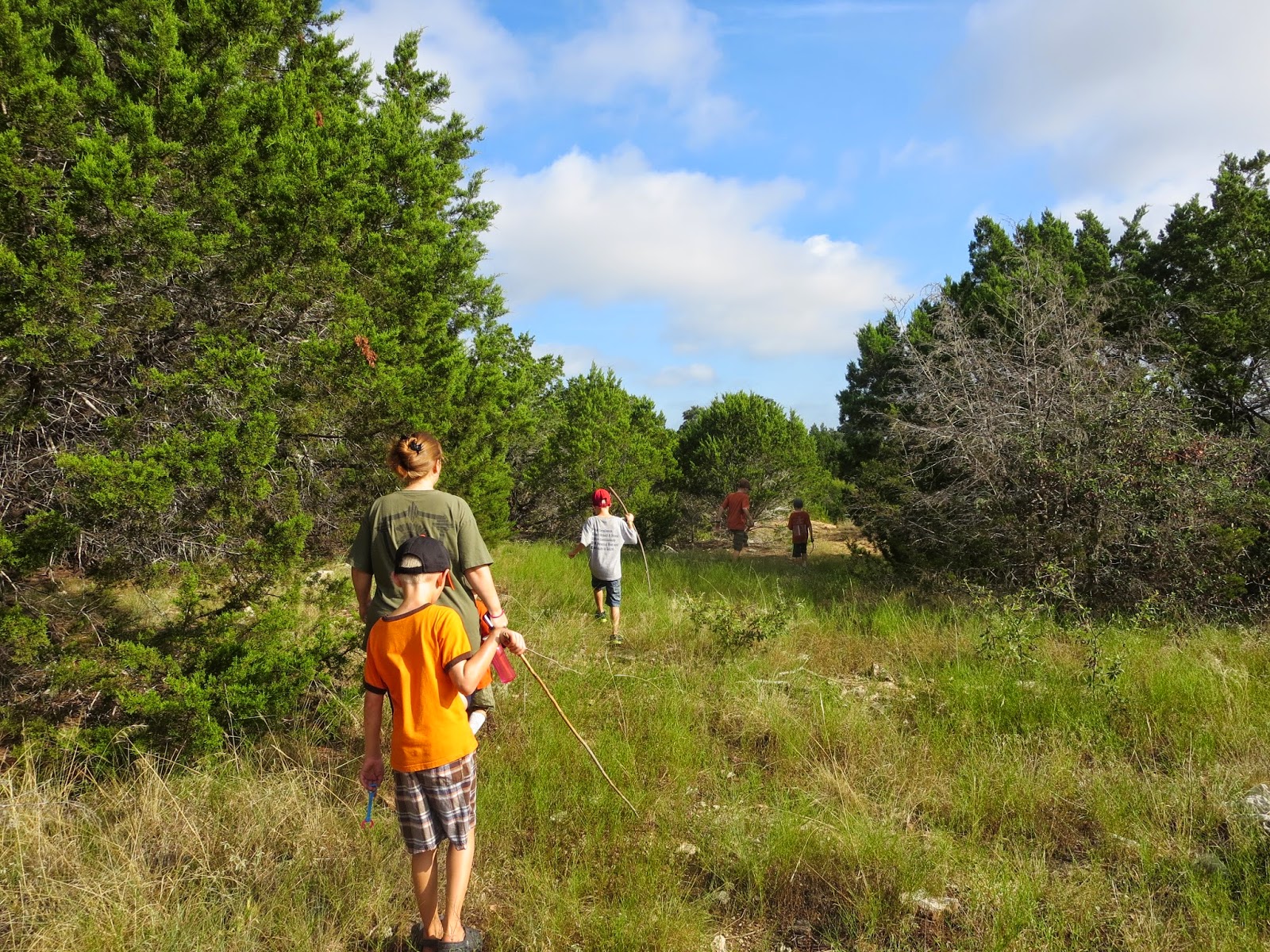 The geocache map led us off the trail. 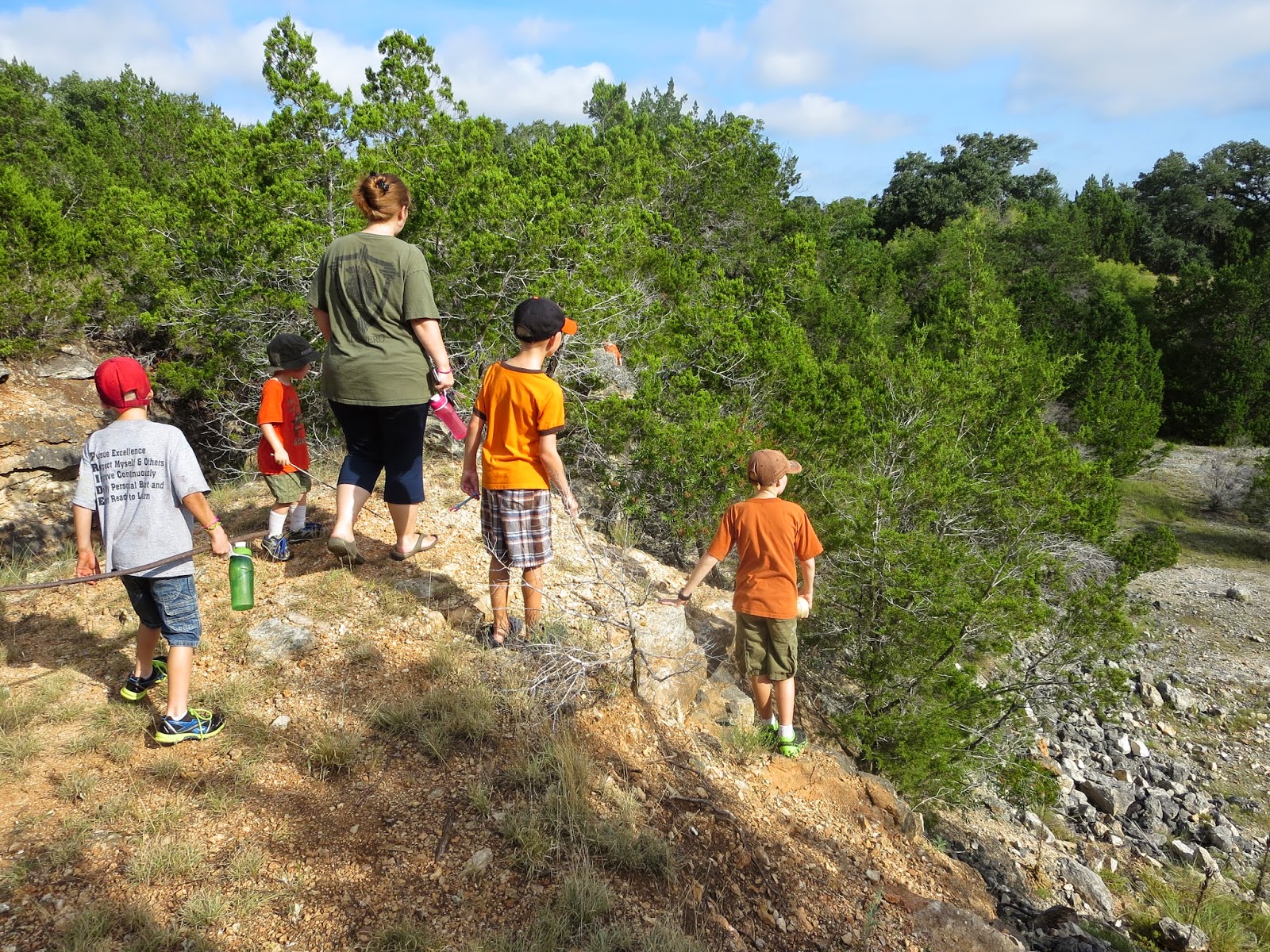 The clue was "cliffhanger". 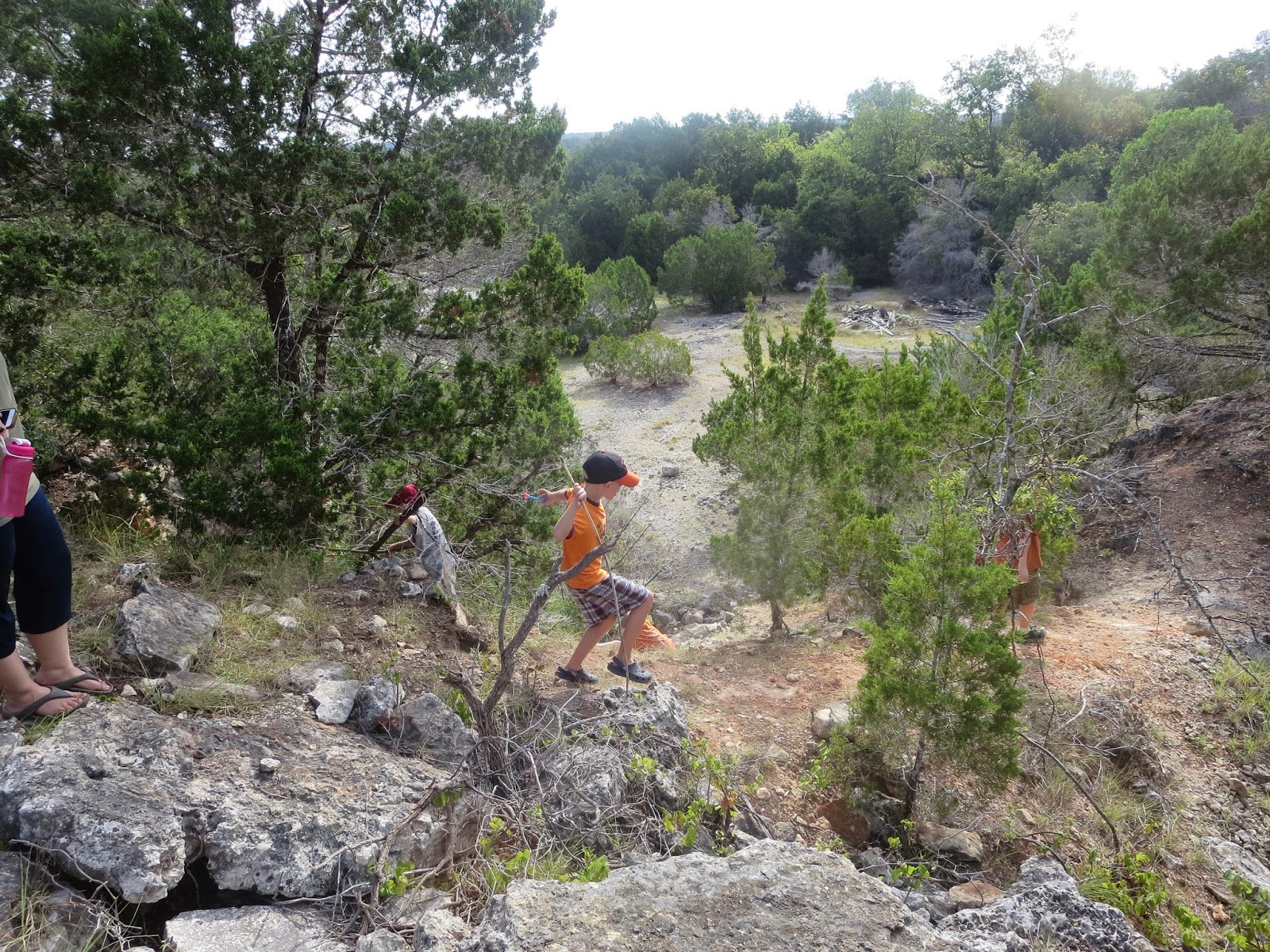 It was steep and slippery down the cliff side. 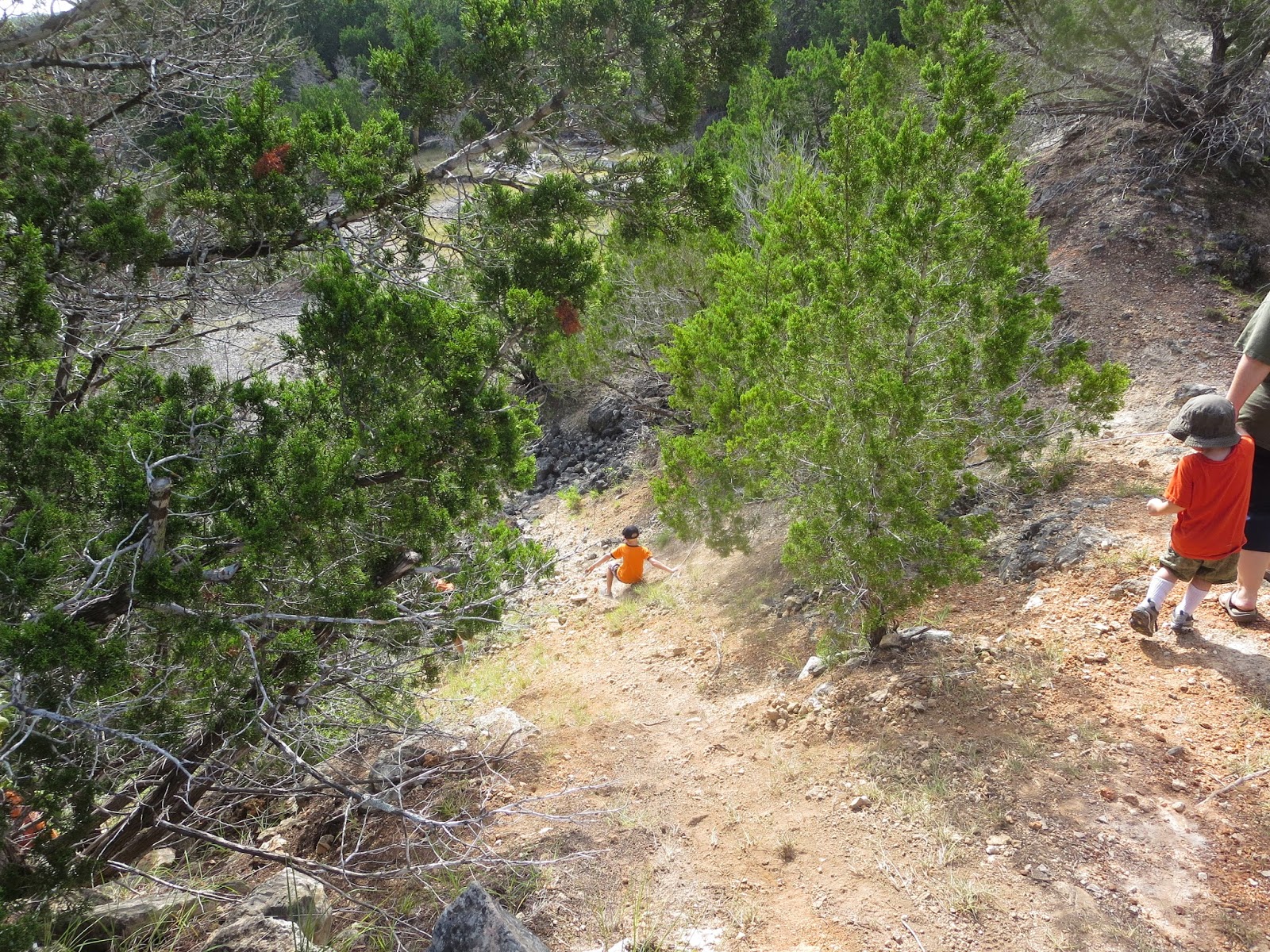 Sliding was the best way to reach the bottom. 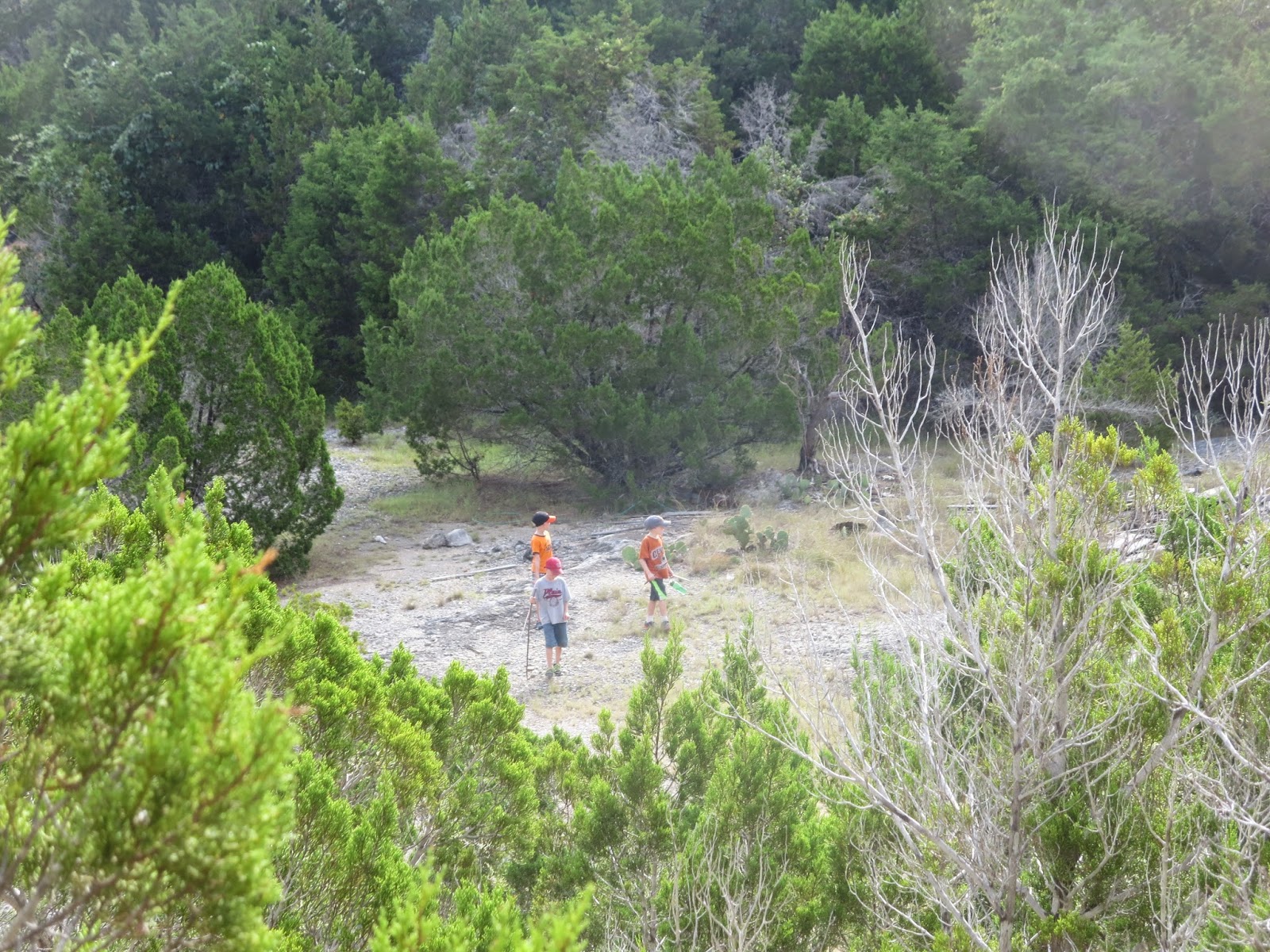 The boys searched and searched but did not find the hidden geocache. 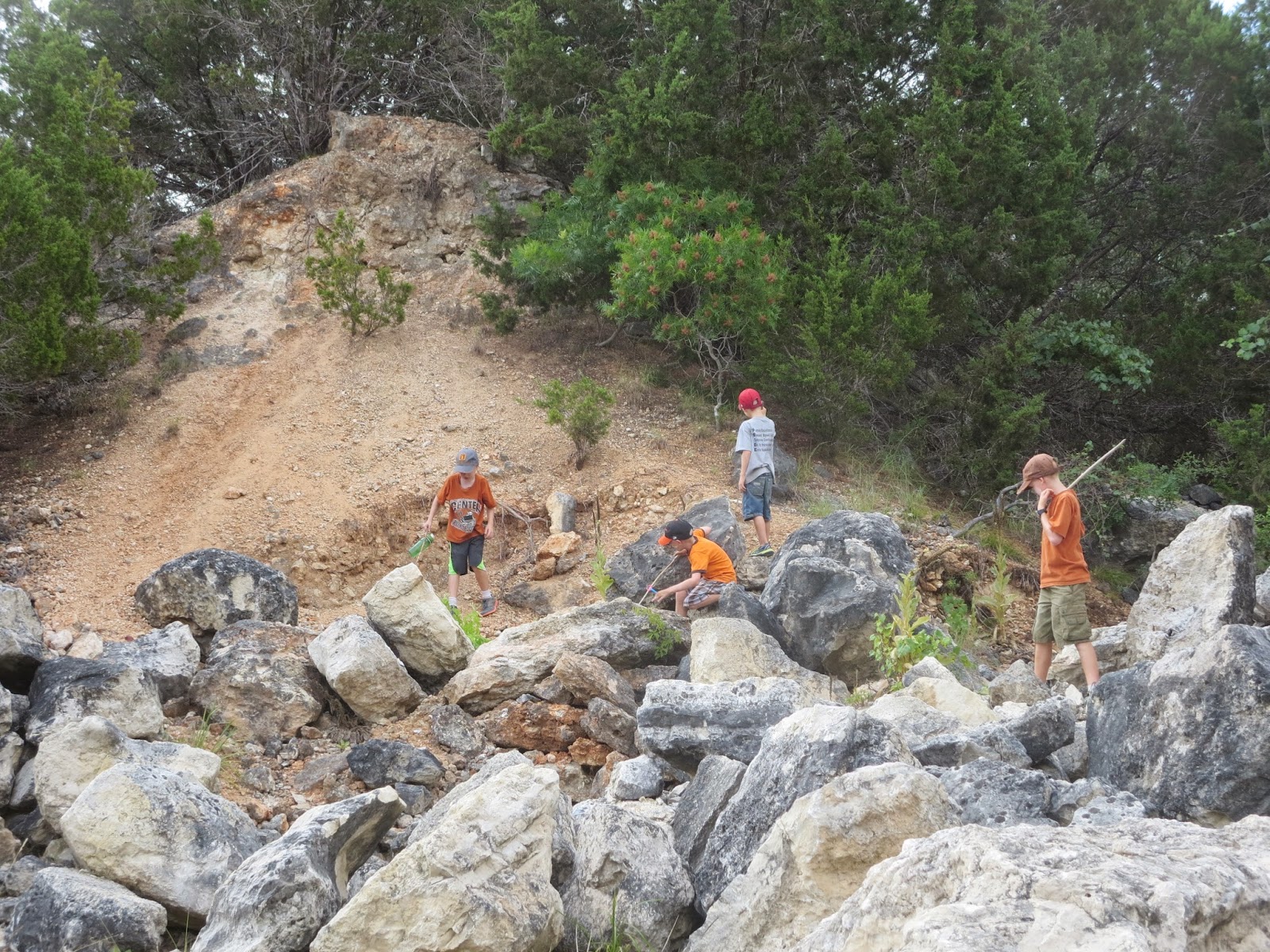 I felt very lucky that the boys didn't find any snakes where they were exploring. 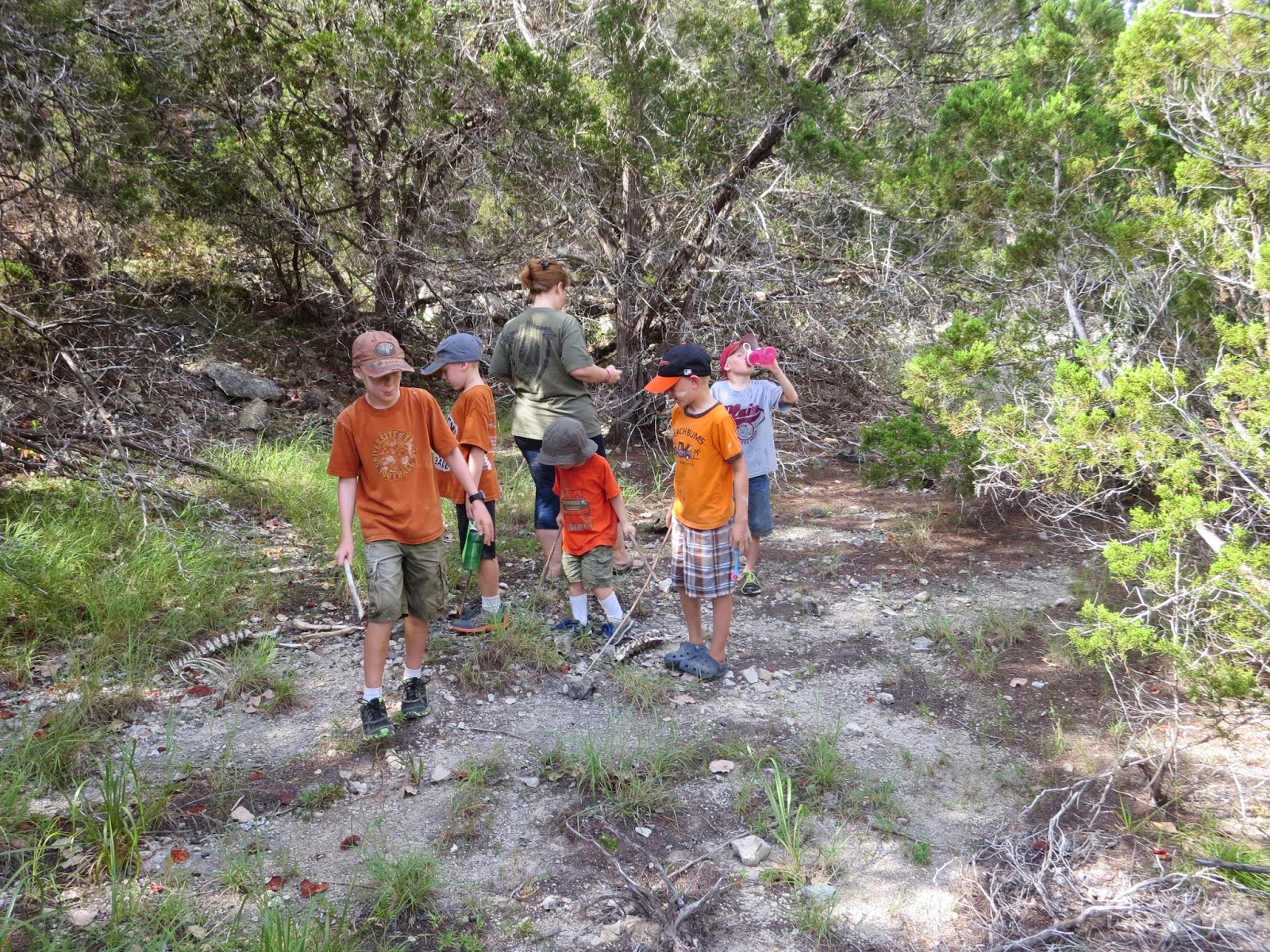 But they did find lots of bones and a half decomposed animal. Ewww! 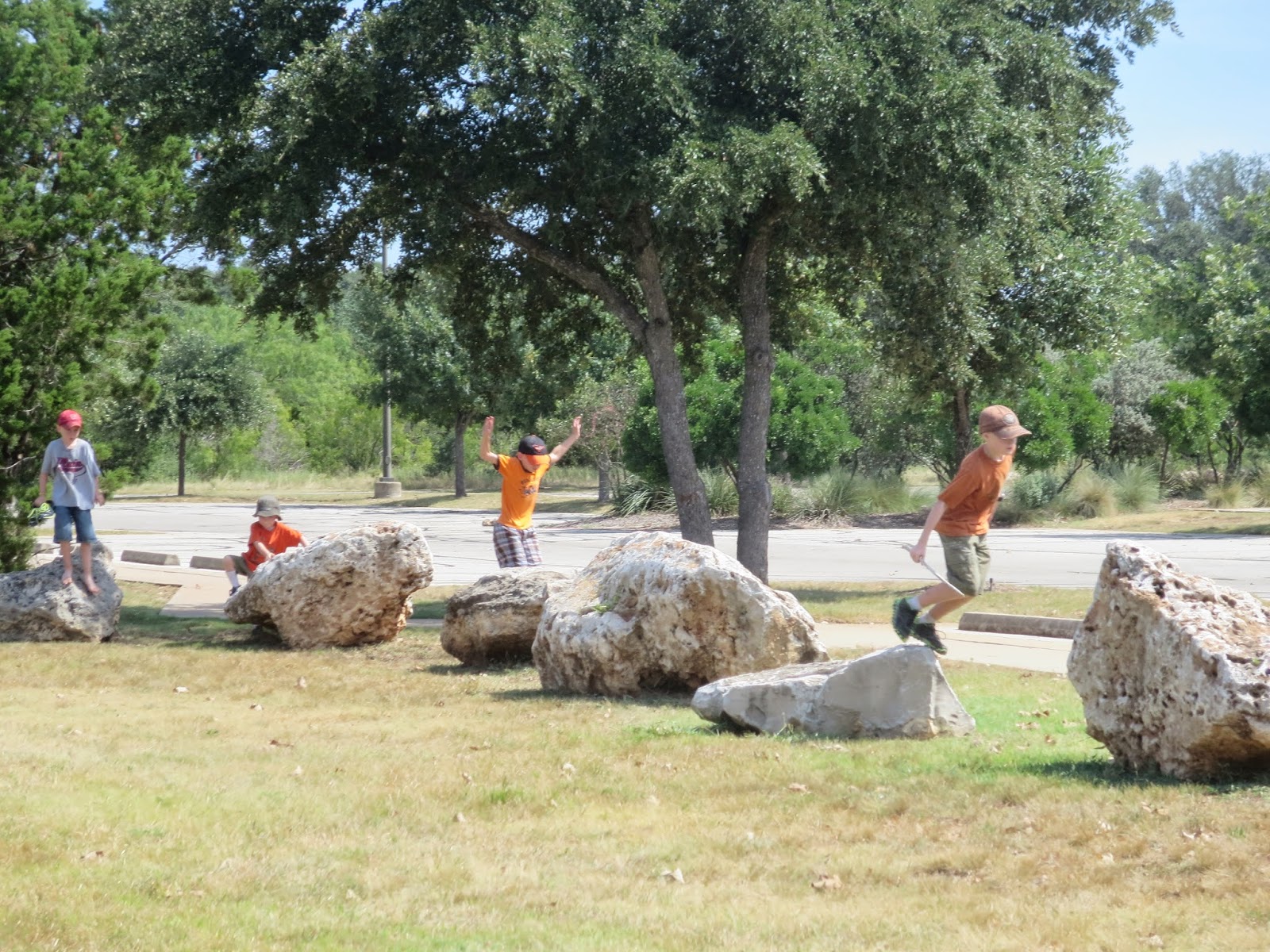 We only found one of the three geocaches we looked for, but the boys had a great time running around outside. Oh well, maybe we will have better luck next time. Right now we are heading out the door to go swimming (again).

This week was Shark Week on the Discovery Channel so Boogs helped me make a special shark breakfast. He ended up not wanting to eat it because of the ketchup "blood". We took some friends to Terra Toys toy store because they were supposed to have Shark Week activities. We must have gone at the wrong time because we didn't see any but we did have fun exploring the store. I bought the Fred Snack Attack cookie cutters to make this breakfast. It has surfer eggs, shark cheese, ham on toast surfboard, ketchup and a blueberry ocean. 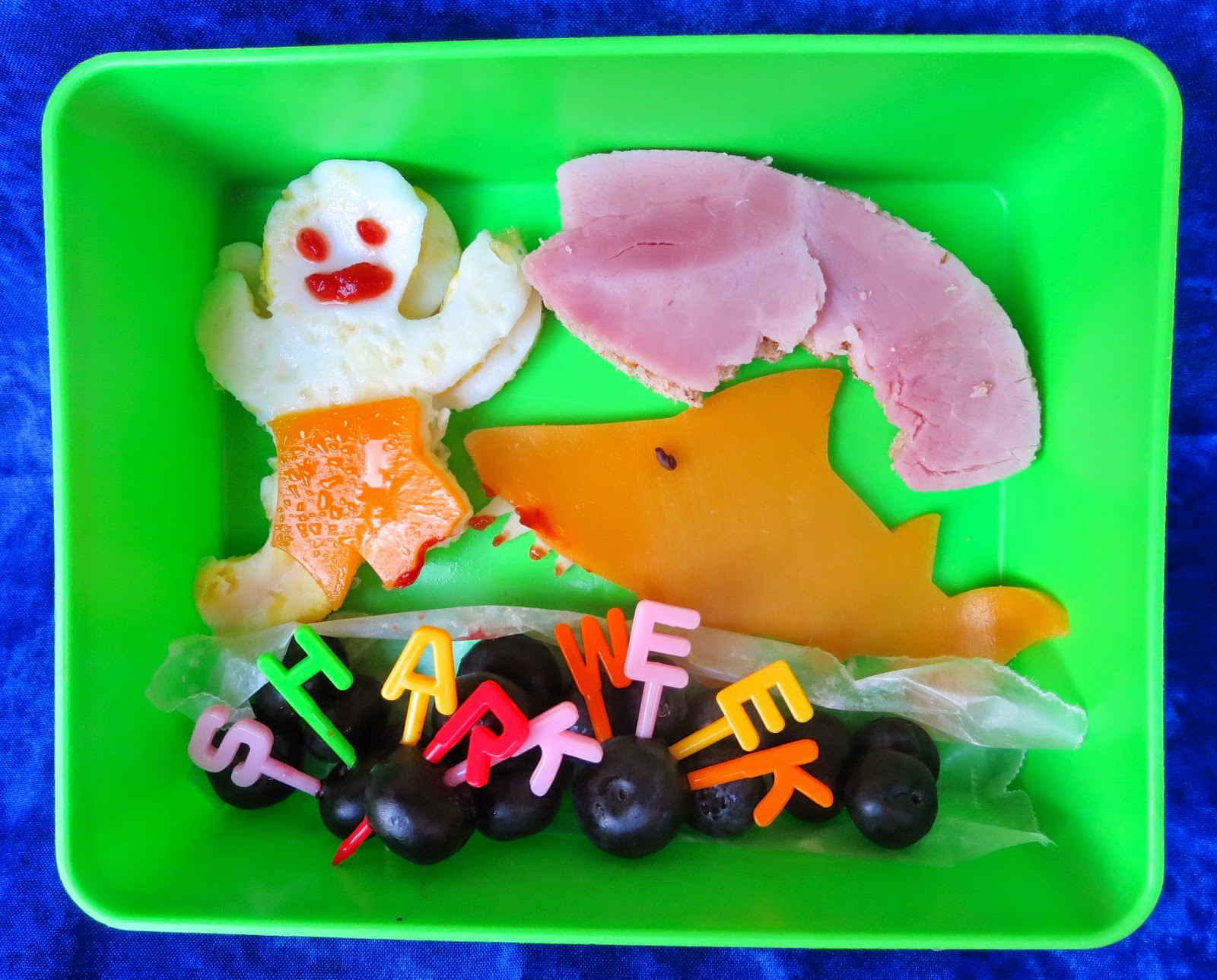