My friend had to drop off her four boys for the day. I wanted to plan something to keep them busy, active, and working together for at least part of the 7 hours they were with me. So, I planned an outdoor scavenger hunt.

I found the decoder ring on  Geocaching.com, the link to it is near the bottom of the post where it says, "Print decoder ring here." I gave the boys clues to decode with letters, numbers, rearranged words, and picture clues. Each clue had a different kind of code to break. The clues were riddles for the boys to solve to find the correct location for the next clue. 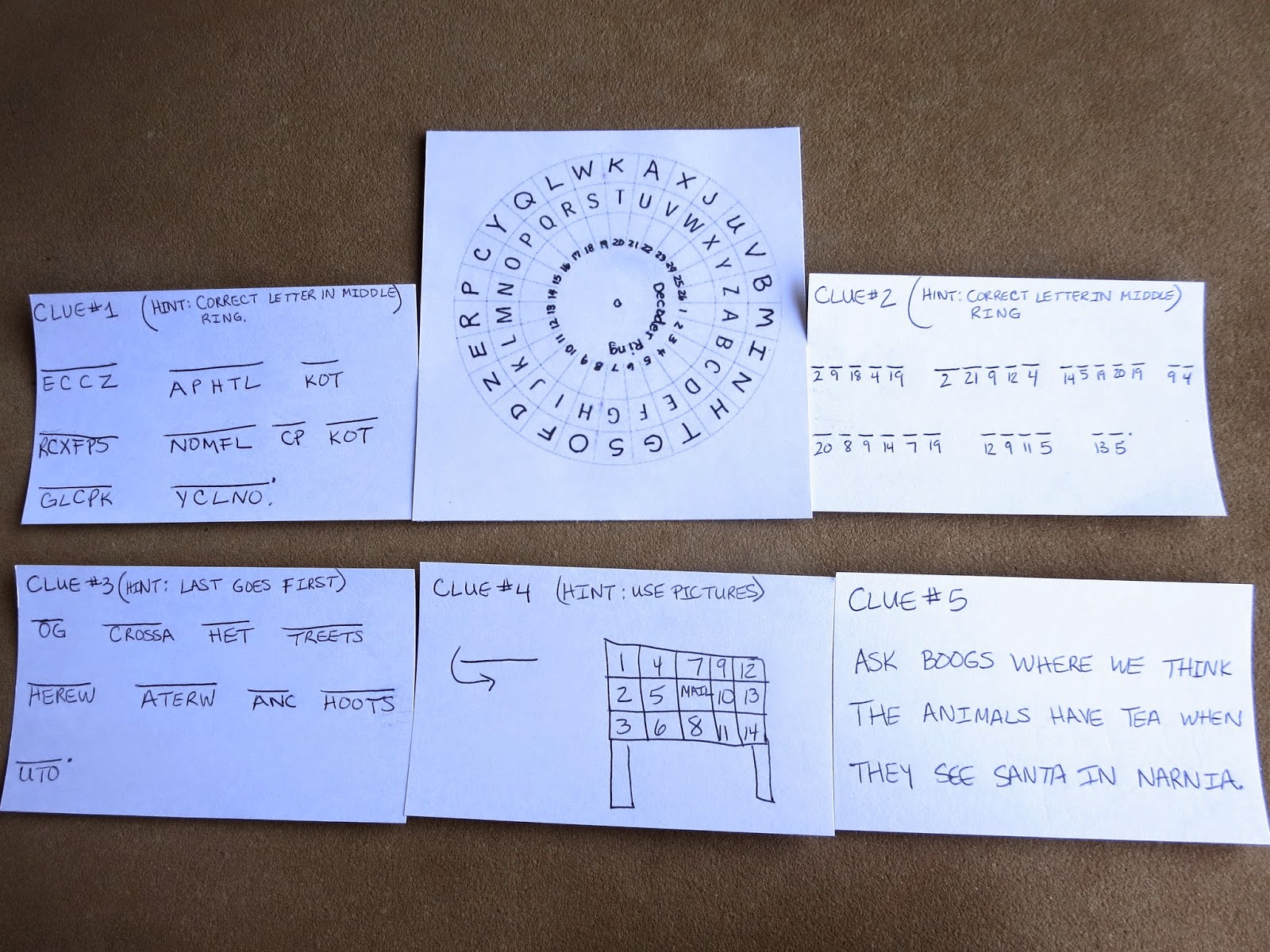 As soon as I gave them their first clue, all of the boys sat down to try and figure it out. 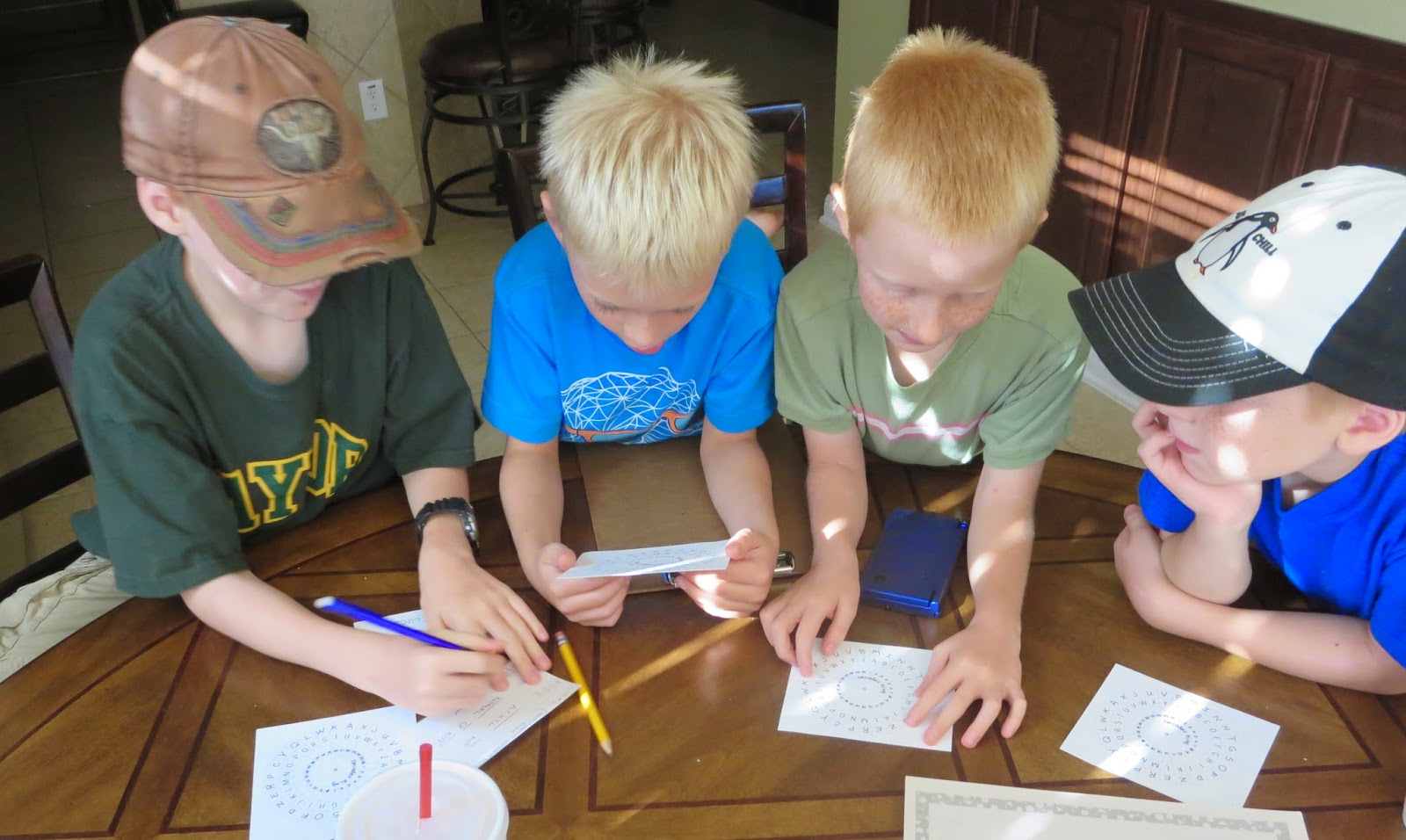 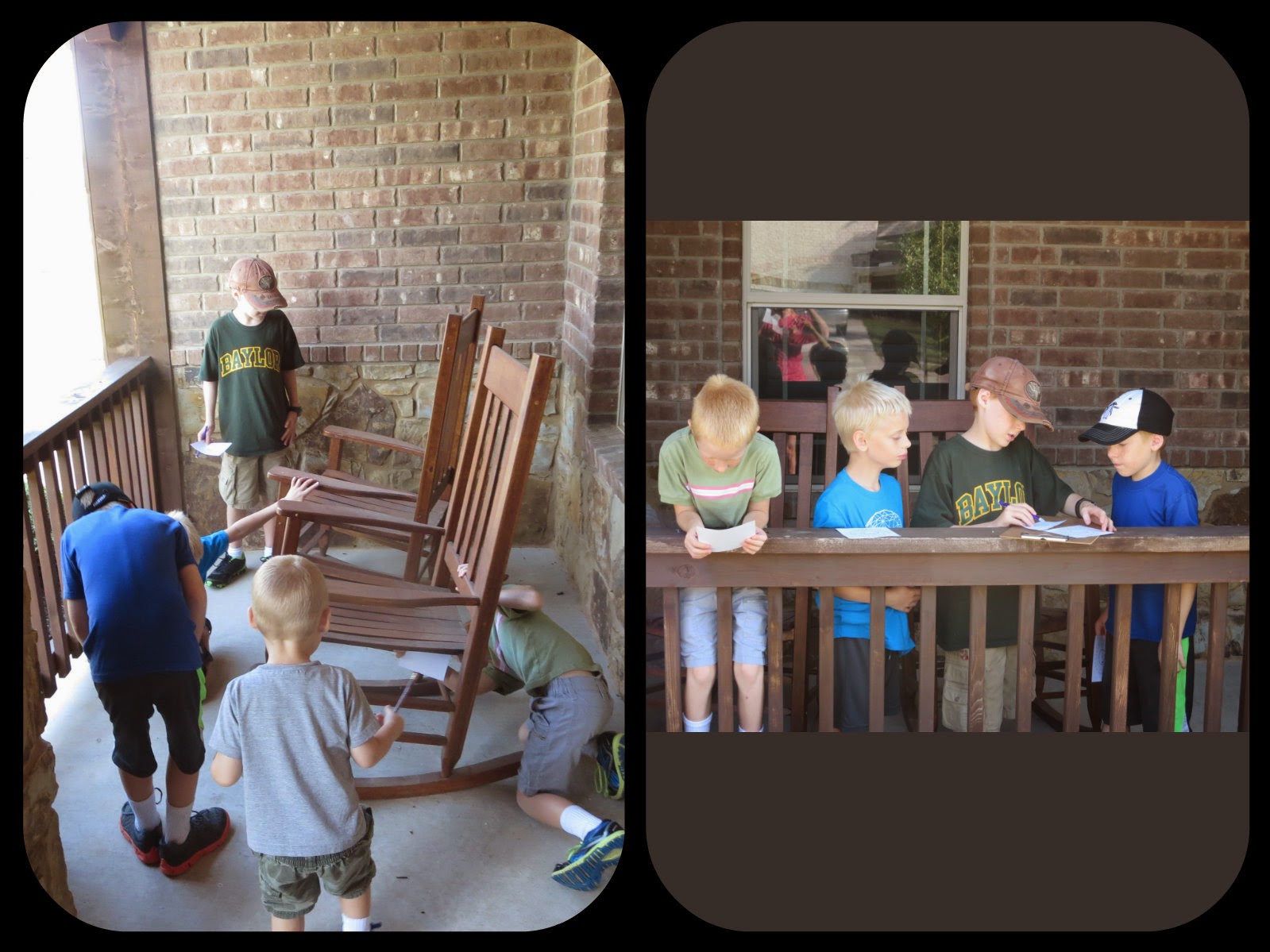 Clue #2 (Birds build nests in things like me.) had the boys searching the trees in the front yard. Unfortunately, J2 &J3 found an actual bird's nest in the wrong tree. They tried to pull the nest out of the tree to search for a clue. Boogs found the clue in the other tree. 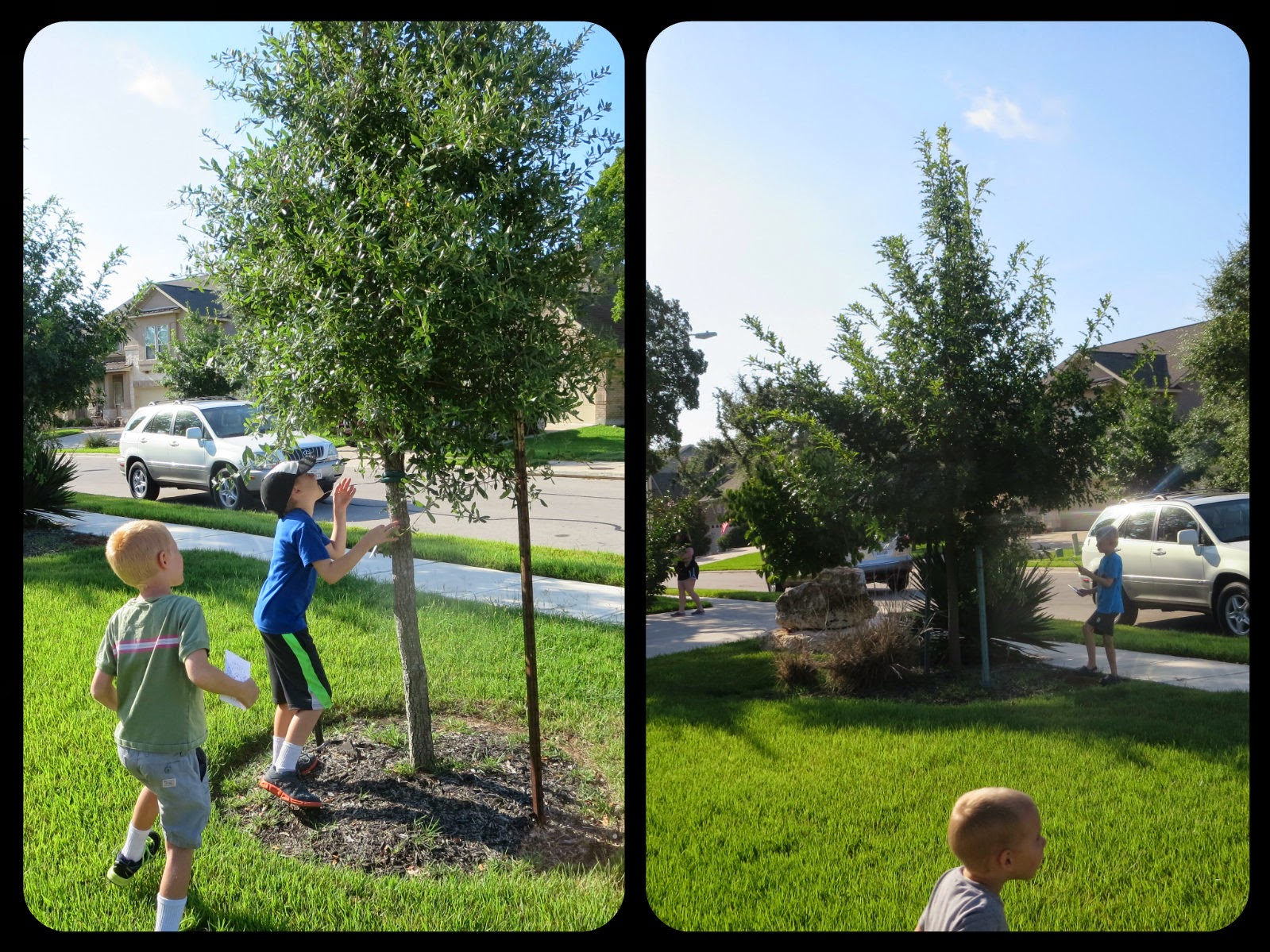 Clue #3 (Go across the street where water can shoot out.) gave the boys a little bit of trouble. I took the first letter of each word and moved it to the end of the word. They figured out how to decode the message but it took an extra hint for them to figure out the next location. Some ideas they had to answer the clue: sprinkler head, rain gutter, hose, faucet. I had to keep them from rushing into our neighbor's yard. I gave them a hint, "Community helpers use these when they need water for their job." There was a mad rush to the fire hydrant when they figured out the hint. J3 got to the clue first. 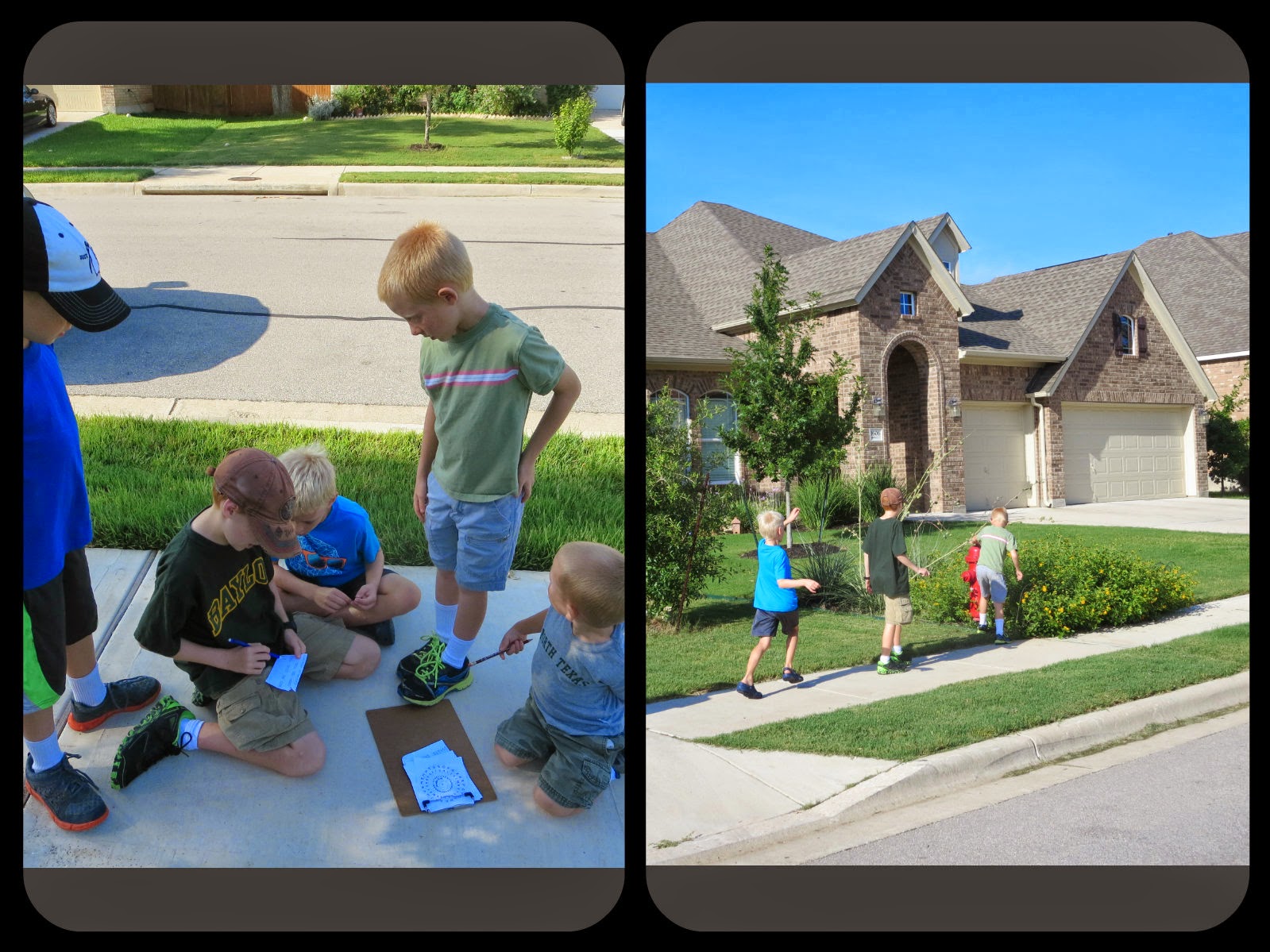 Clue #4 stumped them. I do not draw well, but I thought they would be able to tell the arrow under the line meant "under" and the box of boxes drawing with the word "mail" in the center would lead them to the mailbox. I did not give them any hints and they eventually figured it out. J2 found the last clue under the mailbox. 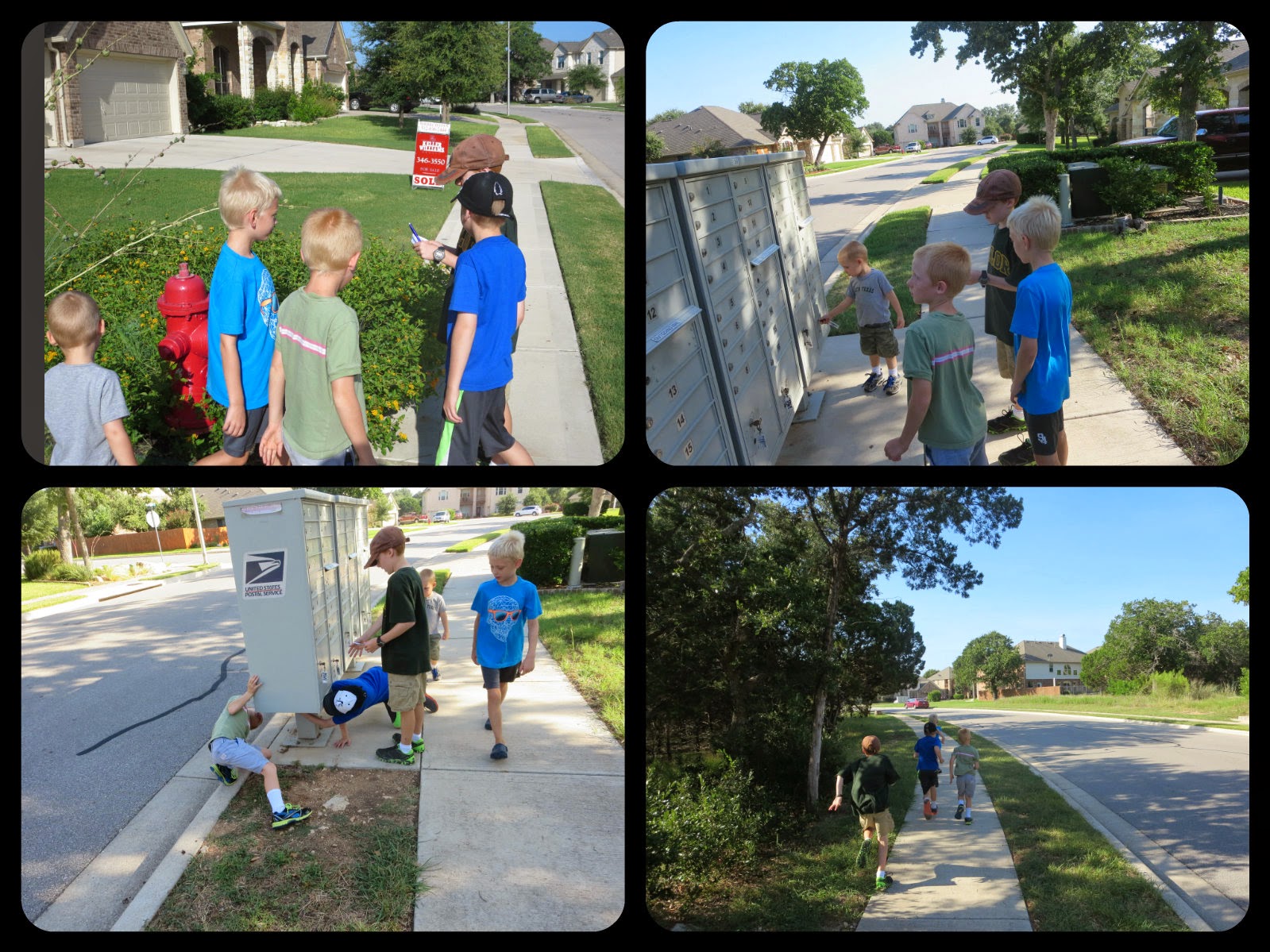 Clue #5 led them to a stump down the block. When Boogs was younger, he and I used to pretend the stump was where some of the animals had tea when Santa returned to Narnia after the Witch's winter spell began to break. Boogs remembered the stump and led the boys down the sidewalk where he found the prize - a bag of Dum-Dums lollipops. 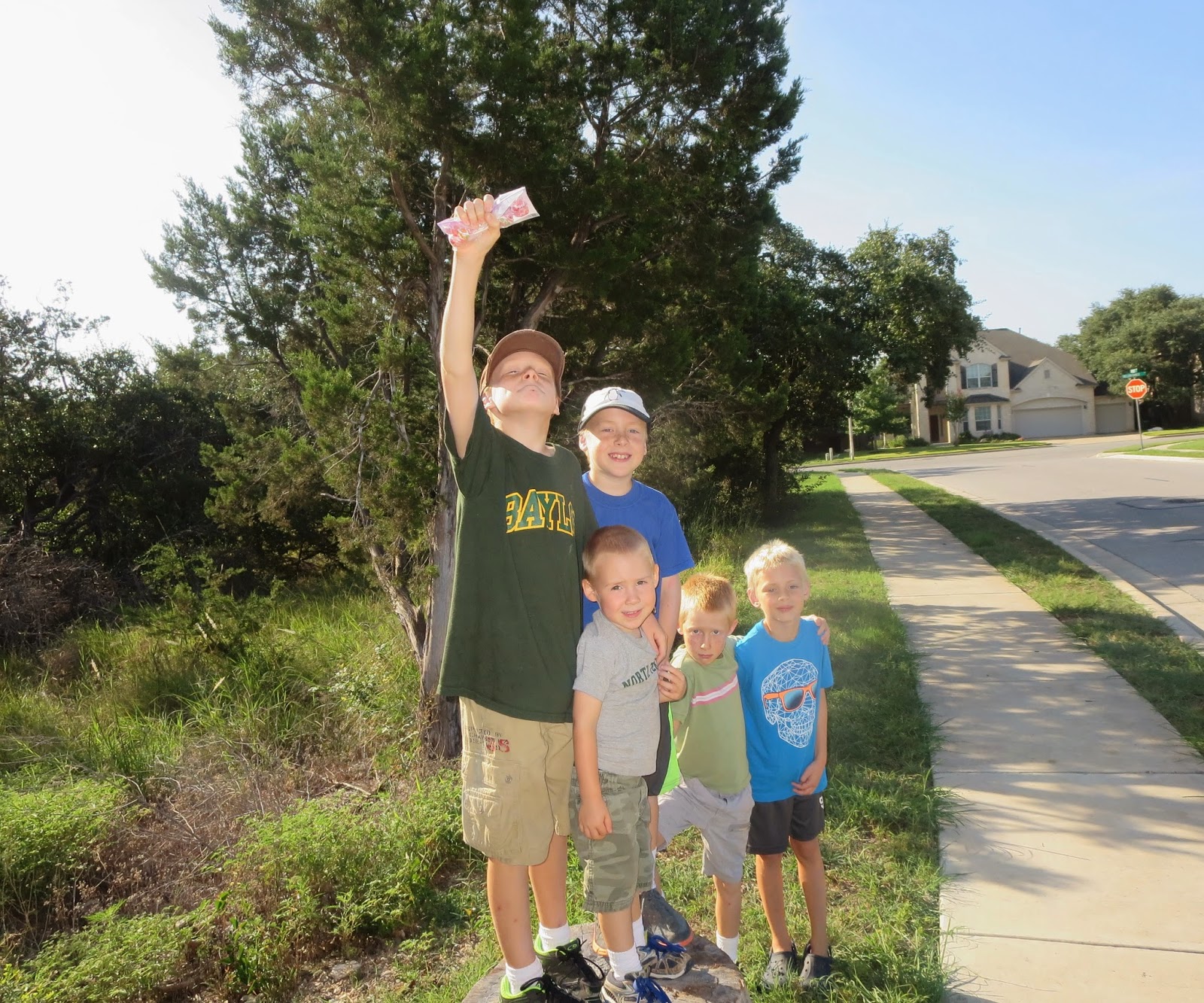 They had a good time on their scavenger hunt and enjoyed their sweet treat.

Don't forget to click over to my back-to-school giveaway. You have until August 10th to enter for a chance to win some great lunch making supplies.

Be sure to check out the wonderful sites I link to on my sidebar!  I would love for you to leave a comment to let me know you stopped by.
Posted by Keitha at 12:09 AM