Keeping Busy In the Heat

We have had an incredibly mild summer, only 3 days of 100 degree heat so far. We have been finding ways to keep busy and stay cool. Last week we went to the Austin Nature and Science Center. We picked a perfect day to go because the temperature only got up to 96.  Boogs always enjoys exploring the indoor part of the center and loves exploring the outside areas. He invited a friend, J, to join us.

The indoor part of the center has lots of hands-on activities. The boys spent about an hour observing bees, looking at slides thru a microscope, experimenting with magnetism & static electricity, learning about nanotechnology, and handling bones, skins, shells, and other objects of nature. 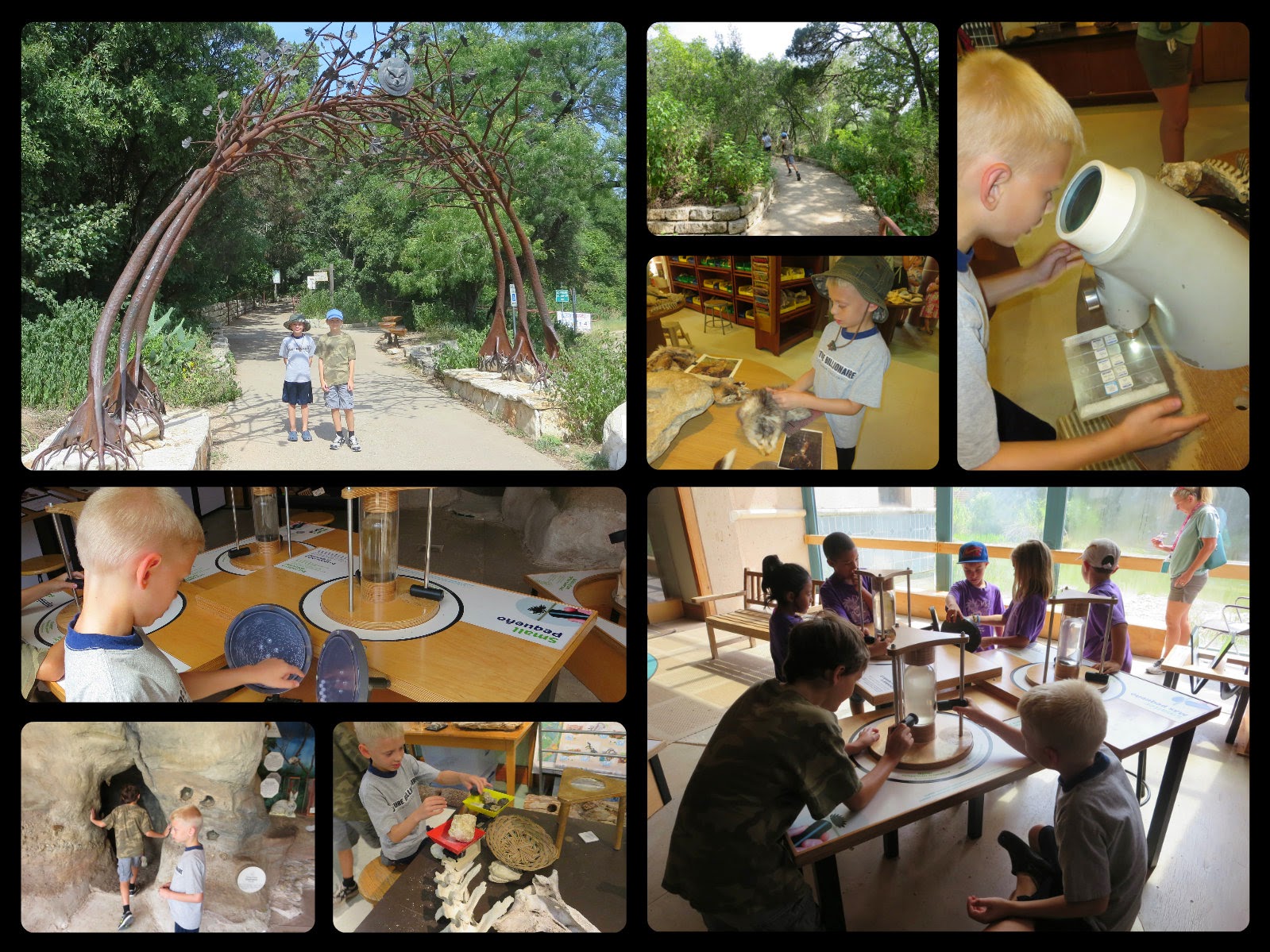 We went outside to see the rescued animals, walk the path around the pond, and play in the sand. There are dinosaur bones in the sand to excavate. 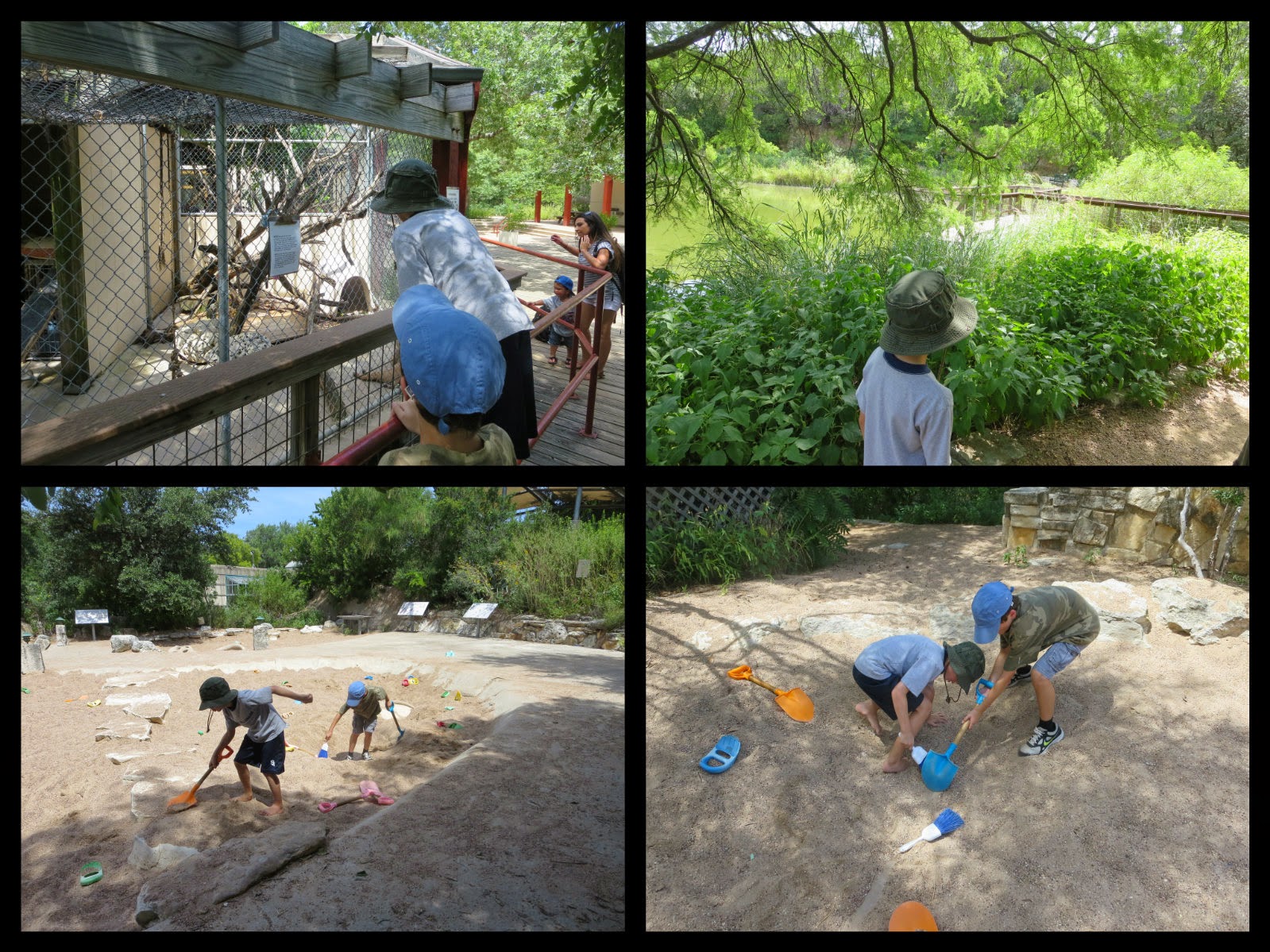 I asked Boogs to stand under the rib cage bones so I could compare it to a photo in the same spot from a previous visit. The photo on the right is from August 2012. 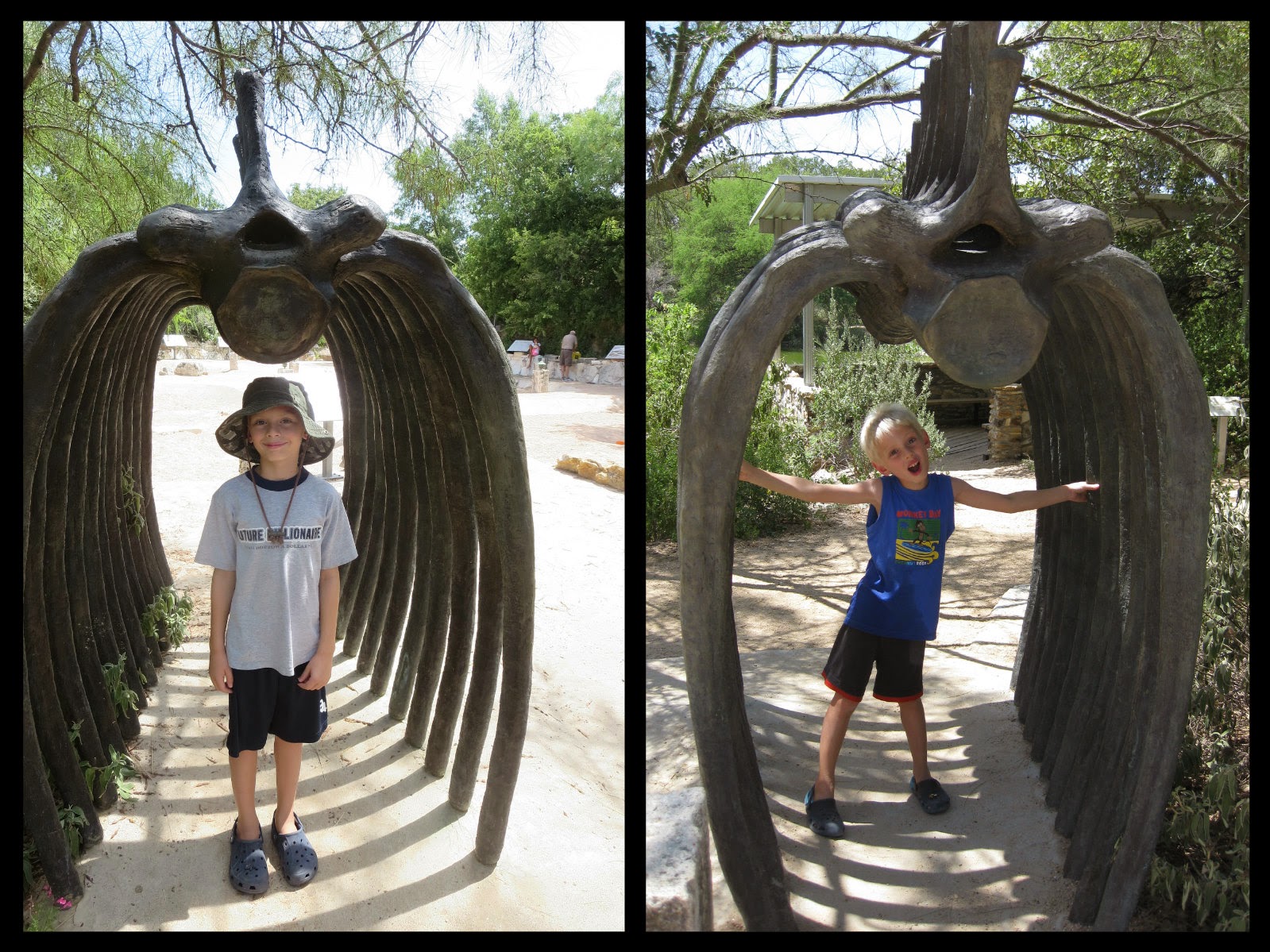 Whenever we go to the Nature Center, I pack a change of clothes. The water areas are too inviting for kids to stay dry. I made sure J brought an extra set of clothes, too. The boys tried "finger fishing". They lightly moved their pointer fingers on top of the water. Fish came up and nibbled their fingers. Boogs did not like it at all. J thought he would be able to catch a fish. J spent at least half an hour letting the fish nibble his fingers while he tried to catch them. Too bad the fish were too fast. Boogs spent a lot time building dams to direct the water flow. Eventually, J decided to help Boogs with the dams. 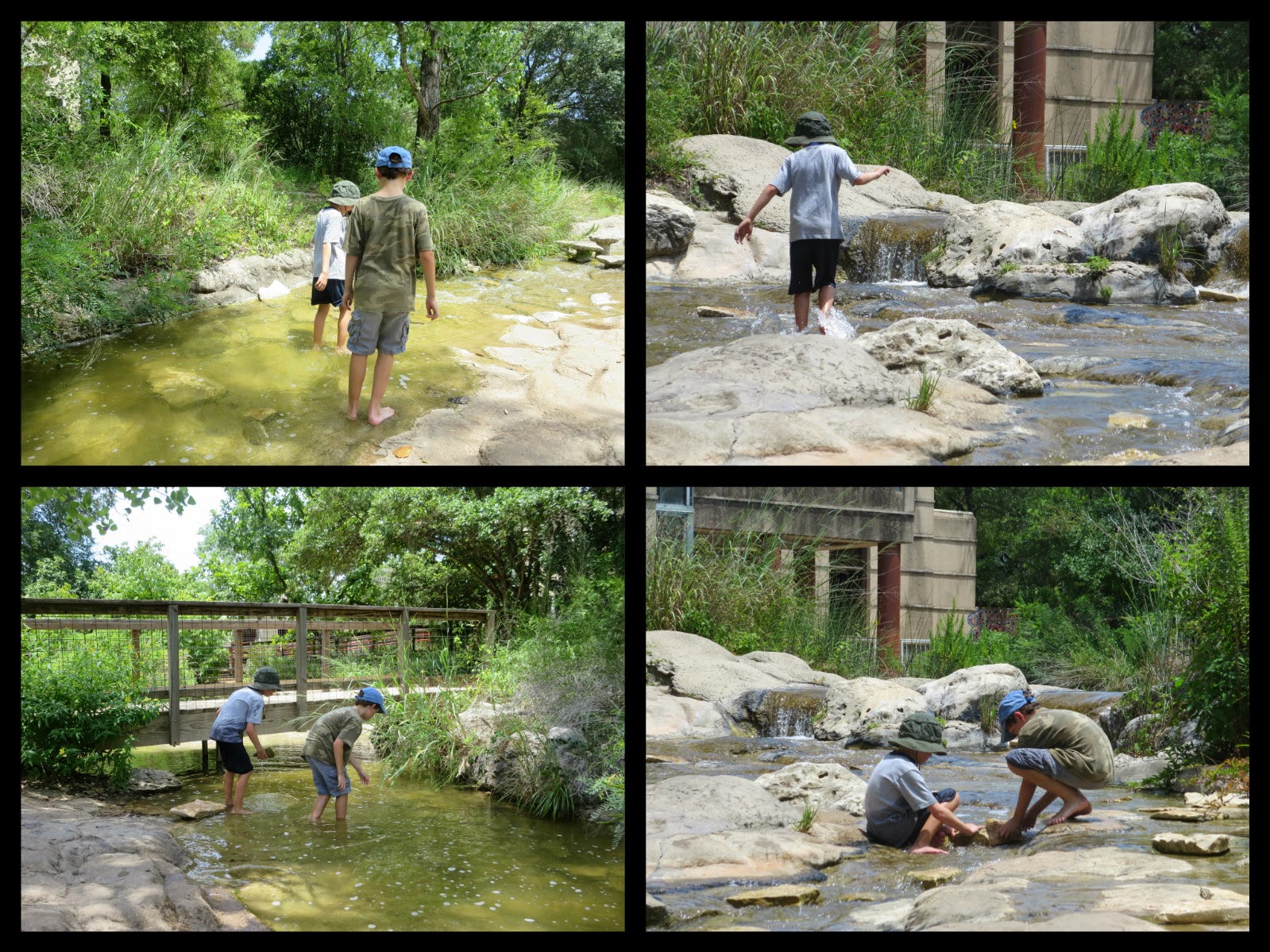 We went to the other side of a bridge and found the perfect spot for leaf races. Boogs moved a bunch of rocks around to perfect the water flow on the leaf race route. Playing in the water was a nice way to stay cool in the heat. I am so glad we had dry clothes. The boys were soaked by the time we left. 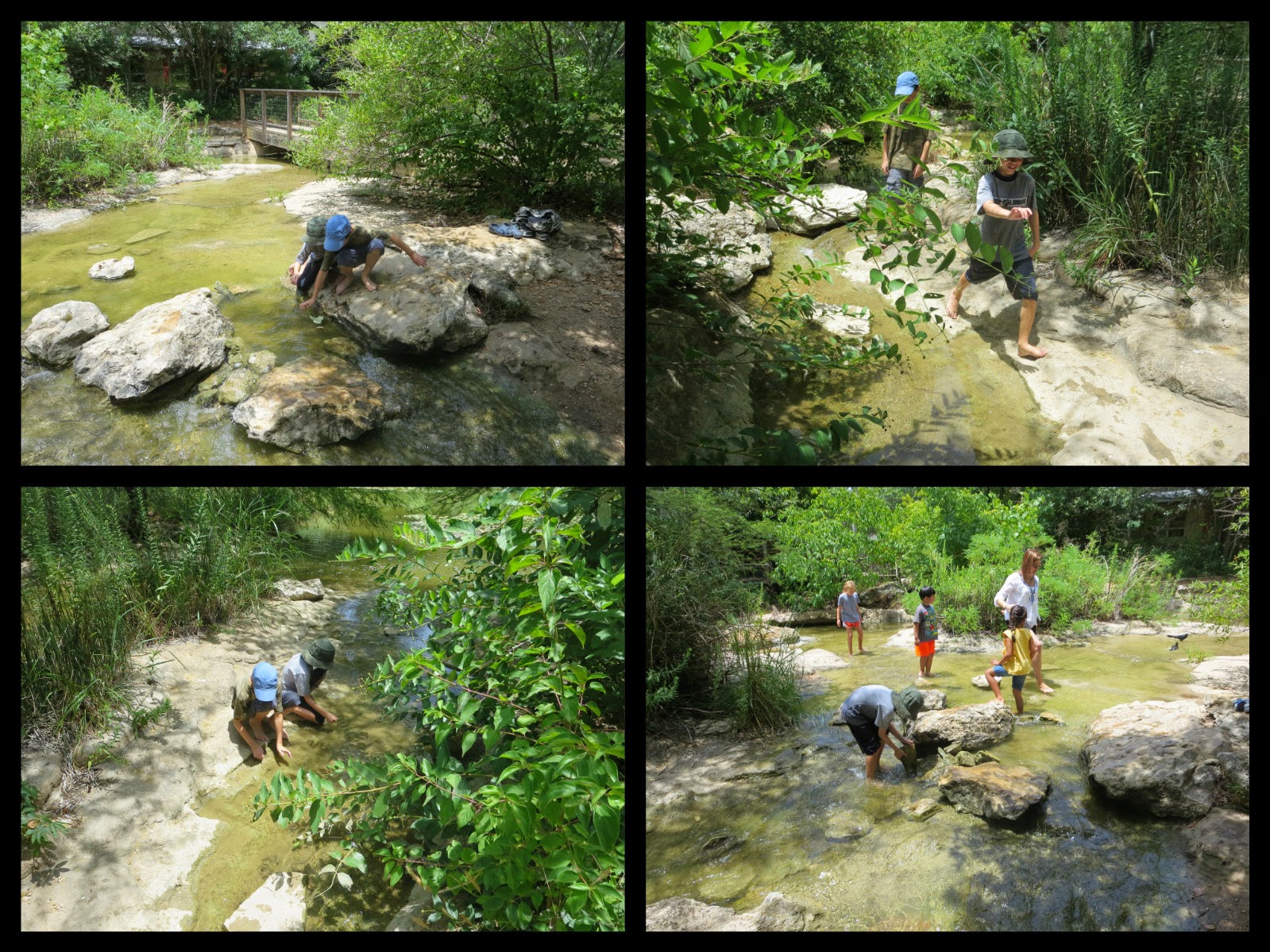 On Sunday, Boogs was invited to try out water polo. 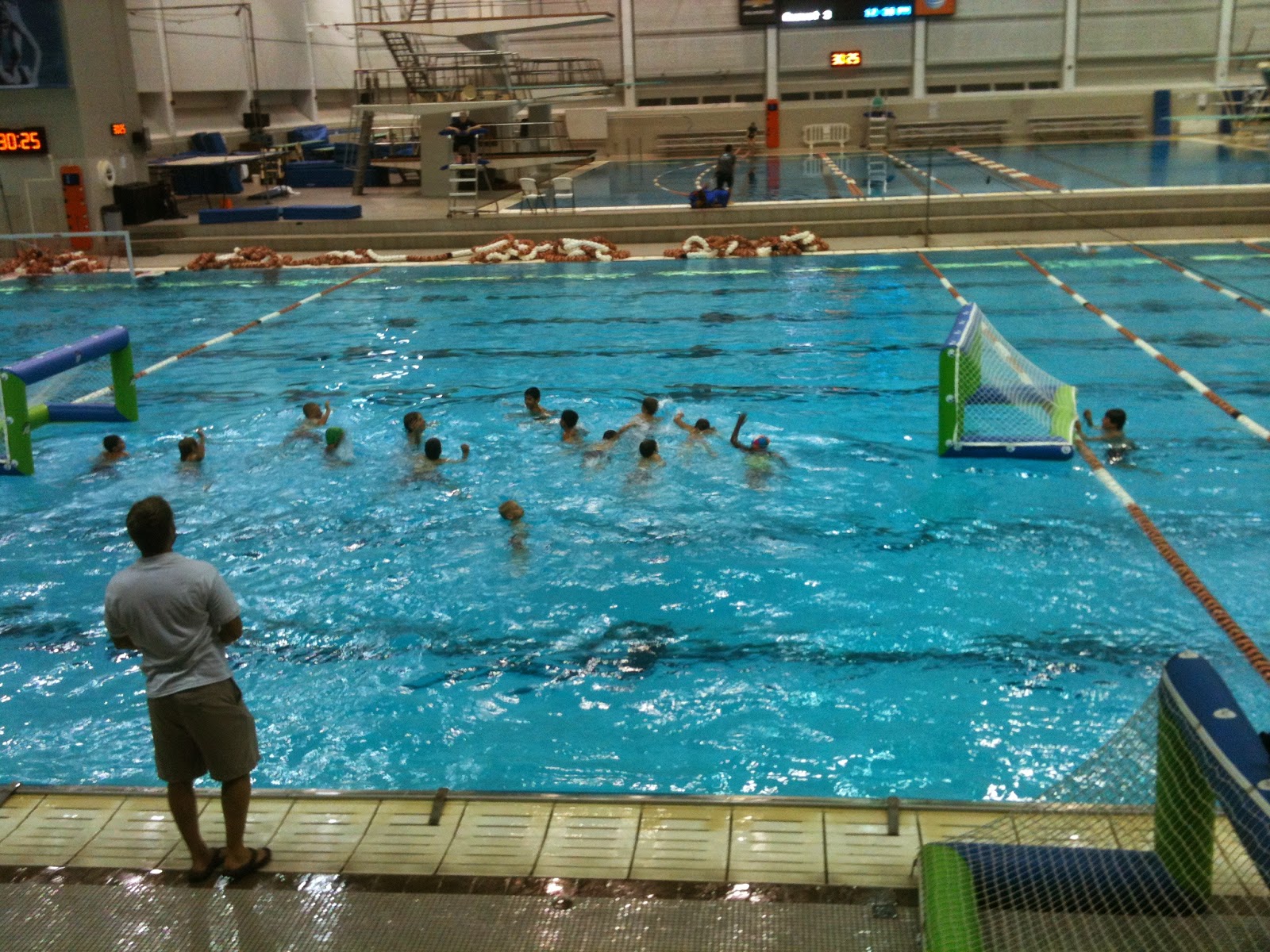 The practice session was held at the Jamail Texas Swimming Center on UT campus. Boogs was the smallest kiddo in the water. It was a 12-year-old and under practice session. I was impressed with how well he could tread water and manage to throw the ball. He played goalie for a little bit of the game. Afterwards, I asked Boogs if he would like to start playing water polo on a team. He replied, "Water Polo is not the sport for me. People are allowed to just dunk you all the time. I got dunked three times and I did not like it." Boogs only weighs 50 pounds. I am sure some of the kids playing weighed twice that amount. Maybe he might want to try again when he is a bit older.

Boogs kept cool Monday through Thursday this week at Diving Camp. He loves being in the water so much I think he is part fish. On Friday, we spent the day at Fiesta Texas. Boogs loves their water park. We have about two weeks until school begins. I can't believe this summer is almost over.