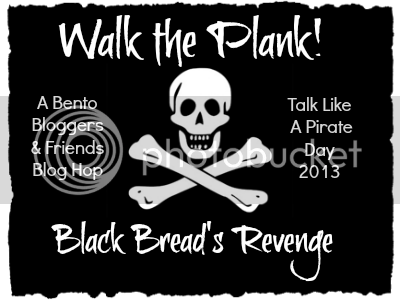 Ahoy there mateys! Welcome to the Bento Bloggers and Friends Talk Like A Pirate Day Blog Hop! It's true, there are two hops today. My pirate lunches belong to the Black Bread's Revenge Pirate Ship o' lunches. After you look at my lunches, click on the pirate flag to  make passage to the next lunch in the hop at Feeling A Little Lunchy.

My son's lunches are inspired by the stories we read together. We have read many pirate books during the past couple of weeks. These are the books we chose to use for our pirate lunches:

Backbeard and the Birthday Suit: The Hairiest Pirate Who Ever Lived and Backbeard: Pirate for Hire by Matthew McElligott 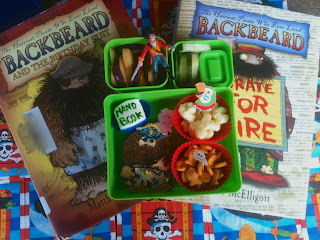 Backbeard was the hairiest, smelliest, dirtiest, meanest pirate to sail the seas. For his birthday, he and his crew got into an all out brawl. Backbeard's pirate clothes were ruined. When he went to town to find replacements, none were available. He ended up with a new suit of colorful and dandy clothes with a straw hat and a pig to replace his escaped parrot. Eventually, his crew accepted his new look. In the sequel, Pirate for Hire, the Pirate Council called Backbeard to a meeting to remove him from his ship for not following the Pirate Handbook Rules for proper dress. Backbeard tried to find new employment. He was too smelly to work with the fish, too strong to work with the blacksmith, and too ornery to work in the tea room passing out cucumber sandwiches. He cleverly found a way to force the Pirate Council to reinstate him as a pirate.

Boogs enjoyed the sequel much more than the first book. He said the Birthday Suit story had great pictures but not enough of a plot. He thought the second book had a good plot. Boogs' lunch was inspired by parts of both stories. 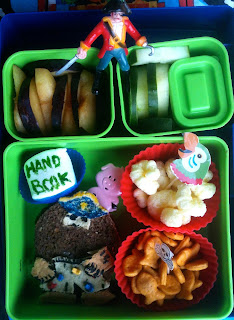 In the Laptop Lunchbox: turkey & swiss cheese in a pumpernickel Backbeard sandwich with a pig pick on his shoulder, Pirate's Booty, smelly Goldfish Crackers, marshmallow Pirate Handbook, cucumber & dressing for the cucumber sandwiches, and plums with a properly attired pirate. 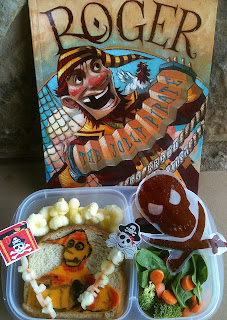 Ever wonder how the skull and crossbones became known as the Jolly Roger. In this book, Brett Helquist explains exactly how that happened. Roger was a cheerful and bumbling pirate who annoyed the other pirates on the ship. When battle broke out, the crew locked Roger in the hold to keep him out of the way. Roger wanted to do something to make the crew like him. So he decided to bake them a cake with the ingredients he found down in the hold. Once again, Roger bumbled. He concocted an explosive mix inside a cannon. Roger was blown straight through the ship's deck. He was covered in flour and soot and looked just like a walking, talking, screaming skeleton. He scared the admiral's men away and saved the pirate ship. The crew adopted a new flag with Jolly Roger's floured face on it to put fear into the hearts of other sailors. 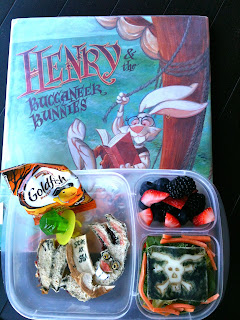 Flashback: This is the lunch Boogs had last year for Talk Like A Pirate Day.  In the ELB lunchbox: pb&j Pirate Henry reading "Storm At Sea" pita chip book, pirate Goldfish, cheese rabbit jolly roger flag on top of a salad, berries for the color of the sky during the storm, and a Ring Pop pirate treasure.

Now that you have seen the bounty of bento lunches here ye must sail on over to Feeling a Little Lunchy to peruse more of Black Bread's Revenge bounty. Just click on the flag to make yer trip.

Once you have completed the Black Bread's Revenge hop and returned to this page, I am sure you will want to see the fantastic lunches on board The Flying Lunchman. Just click the HERE and you'll soon return to BBF harbor to board The Flying Lunchman portion of the Bento Bloggers and Friends Talk Like A Pirate Day hop. Thanks for sailing the Bento Bloggers & Friends lunch ships today.


Be sure to check out the wonderful sites I link to on my sidebar! If you want to see more book inspired lunches, click on the "lunches" label at the end of this post or go to My Story Themed Lunches board on Pinterest. I would love for you to leave a comment to let me know you stopped by.
Posted by Keitha at 6:25 AM