Moving In - Day One

It was an interesting and busy first day of moving in to the new house. Luckily, I had two friends who took Boogs on an adventure for the entire day. After swim team practice, Boogs went with six kiddos and two moms to Brenham, Texas to visit the Bluebell Ice Cream Factory and then swim at the Bluebell Aquatic Center. On the way to Brenham (about a 1 hour 40 minute drive), they stopped off in Elgin for barbeque. Boogs did not get back into town until almost 8 pm. He was exhausted!

Meanwhile back at the house, we had some good things happening and some frustrating things happening. All of the painting was completed on Thursday and it looks amazing! We had a lot of service calls come out to the house: a new garage door installed, a company came by to discuss installing doors on the theater room, a company came by to discuss staining the back porch, pool table installation, fridge delivery, phone/internet hook-up denied, and window blinds installed. The garage door looks amazing, I will have to get a good picture of it to post. The guys who were installing the pool table told us that there was a problem with the slate, one section was not exactly the same size as the other two sections and the pre-drilled holes in it were not lining up correctly. He told us he was not comfortable putting it together and would order another table. It will take 3 - 4 weeks for the new table to come in. The blinds went in perfectly, we will have to wait a couple of weeks for the plantation shutters to arrive. AT&T said they cannot hook up our phone/internet service because their service box is on the opposite side of the house from the wiring they need to connect to. The AT&T rep told us they will have to contract a crew to come out and bore a hole under the yard and driveway to get the cables connected to their box. He could not give us ANY kind of timeline for this. My husband spent well over an hour trying to get an answer about how long this will take. No one knows. In addition to that, my husband's phone is on the fritz and dropping calls like crazy. So, the home phone and the cell phone used for all of the service call contacts are not working. It is very frustrating!

Getting the fridge into the house was a challenge. The fridge was too big to fit through the front door. Normally, they just take the front door off the hinges and can easily get a fridge into a house. Our front door had some sort of hinge locks on it and could not be taken off. So, the delivery crew took the fridge apart on the front porch to get it through the door. They had to remove all of the doors which led them to removing most of the inside shelving so the shelves would not fall out. It was quite the process. Right now the only thing sitting in that fridge is a bottle of champagne and a 12 pack of beer for after the move today. 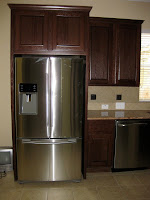 We rented a U-haul to pick up furniture from our decorator's warehouse. That was an adventure. When we were leaving U-haul, a woman driving another truck pulled in and blocked the entire exit because she could not drive her truck around the corner of the entrance. My husband got out and moved her truck and lightly bumped into our truck. No damage was done. We picked up a friend and went to load the truck at the warehouse. We did not realize how much and how heavy the pick-up items would be. They filled the entire truck. Our decorated stated that we were the happiest movers she had ever seen. It was either joke or cry about it, so we had a few good laughs and hopefully nothing is broken.

Today is a brand new day! Movers are coming in about an hour to clear out the apartment and storage unit and haul it over to the new house. That means we will be sleeping in the new house tonight!
Posted by Keitha at 9:04 AM