Boogs LOVES to do science experiments. Last night in the bath tub he was pushing around a toy boat to create giant waves. He asked me if the waves were a chemical reaction. He really wanted to see an explosion. So today after school we went ahead and did the "Dancing Raisins" experiment. We mixed water, vinegar, and baking soda together in a glass and then added a few raisins. The raisins sunk to the bottom of the glass, floated back up to the top, and then kept doing that for a couple of minutes. Of course we had to add more vinegar and baking soda just to see what would happen. The liquid bubbled up over the top of the glass, spilled across the table, and made a big puddle on the floor. Boogs was so excited. He yelled, "Let's do the explosion again!" The floor was already a mess so we did it a few more times. Boogs then decided that we should play "Catch a Raisin Fishing Game".  He drew a picture of a raisin in his Science journal. I wrote raisin at the top of the page and he was able to write it on his own at the bottom of the page. 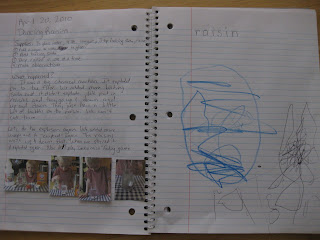