Boogs and I have enjoyed getting muddy in the Mudstacle obstacle race for the past few years. Here is a look back at the courses for Mudstacle 2016 and Mudstacle 2017. Unfortunately, I was unable to participate this year - torn meniscus in my knee and my right hand in a splint with an overstretched ligament with a bruised bone & joint. I don't have pictures of all the obstacles on the 5K course. Fortunately, one of Boogs friends was able to run the race with Boogs last Saturday. 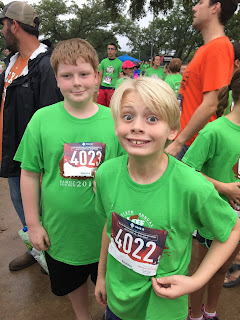 Warming up before the starting horn opens the course. 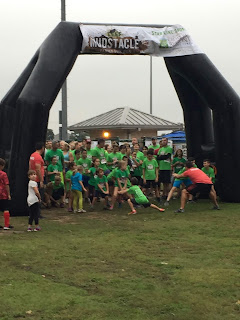 Boogs' friend's mom managed to get a couple of pictures of the boys at the first two obstacles. Here they are climbing over the giant spools. 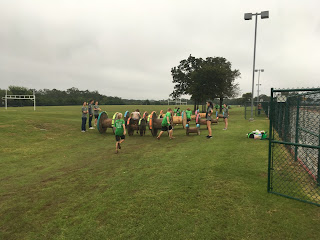 They had to run through a muddy pit while people were trying to tag them with pool noodles on ropes. Then they turned the corner and were out of camera range. 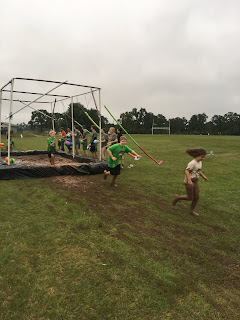 We waited for the boys at the finish line. Here they are entering the home stretch. I asked them why they weren't running. They said they were tired. It has been raining off and on for for two weeks. The race planners did not know if the Mudstacle would be able to happen until the morning of the race. Luckily, there was no lightning, only rain. The course was EXTRA muddy. 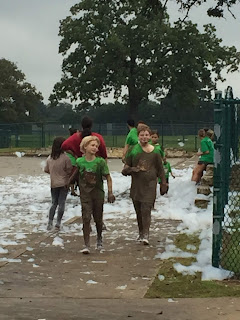 Jumping for joy as he crosses the finish line. 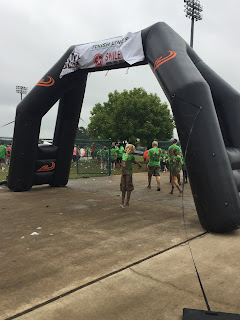 Boogs managed to lose both of his shoes and his socks in the muddy pits. His friend lost one shoe and one sock. I'm so glad they both wore old, beat up sneakers for the race. 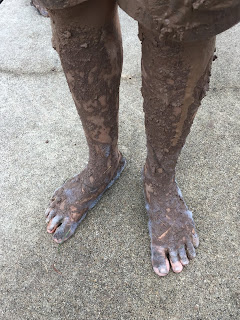 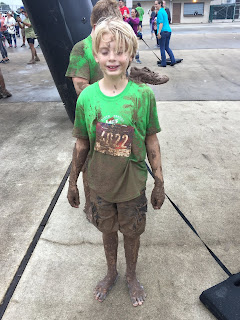 The Foam Pit is always a hit with the kids. The boys spent at least an hour playing in the bubbles. It helped clean them off just a little bit. 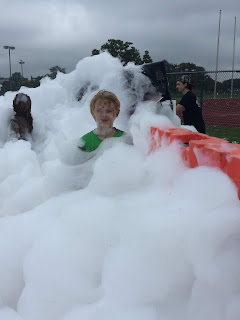 They played Marco Polo while hiding under a layer of bubbles. 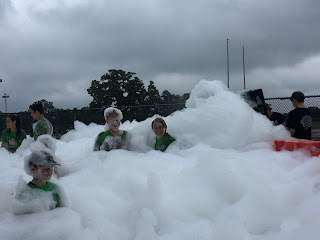 It took a long time to convince them to go rinse off so we could leave. 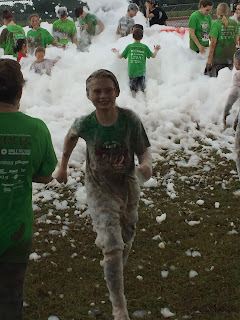 Boogs left the hose line three different times before he was finally rinsed off. They had to have a snowball fight. A local snow cone shop had balls of snow cone ice for the kids to throw. 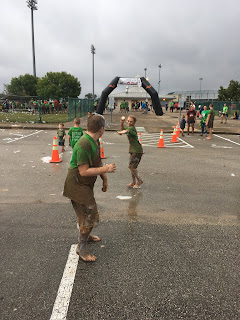 The hose rinse helped them get sort of clean. They changed into clean clothes so we could go out for lunch. Both boys had a spare set of shoes in the car. 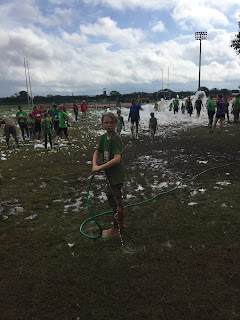 The boys had a ton of fun. I was sad not to participate but happy they had such a great time. While we were eating lunch, Boogs ran his hand through his hair and found a clump  of mud stuck in his hair at the back of his head. He was happy to take a long shower when we got home.

Last Thursday, Boogs had his Fall Band Concert. My parents were able to attend. We really enjoyed listening to all three bands play. 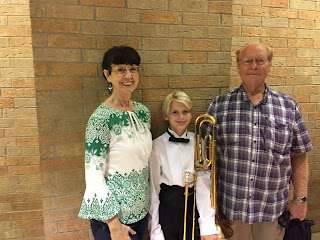 Boogs looks so grown up in his tuxedo shirt and tie. 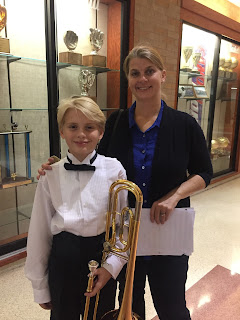 Daddy played the trombone when he was in high school. It was great to hear the middle school bands play. They sounded awesome! 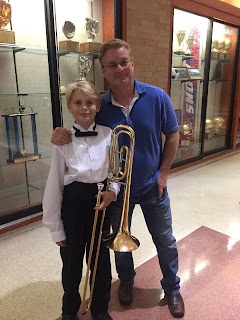 We have been spending a lot of time indoors because of the weather. Texas is getting way too much rain. Boogs' middle school band was supposed to play at the high school football game tonight. The constant rain cancelled those plans. Many areas near us are flooding. I personally know three people who have lost their homes near lakes. A couple of days ago, a local school bus was swept off the road and into a flooded creek when the driver chose to drive through a low water crossing. The driver and passengers were rescued from the water. We are ready for the rain to stop.