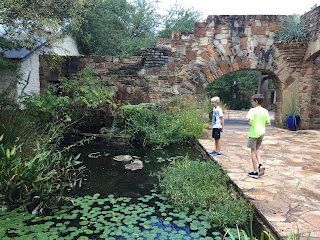 We made sure we took care to follow the warning on this sign.
The boys were super excited to hit the mile long loop trail to discover the fort areas of Fortlandia. According to the brochure Fortlandia has "10 unique forts designed and built by local architects, designers, students, and artists. These creative spaces will transport you to imaginary worlds and spark an appreciation for art and nature - and the curious, wonderful ways in which they intersect." 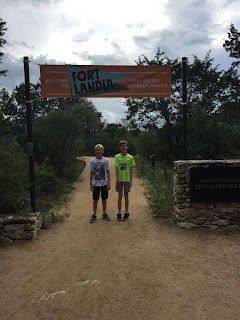 The Keep was the first fort we came across. It was made with baling wire and juniper sticks. The boys felt like they could make something like this by themselves. 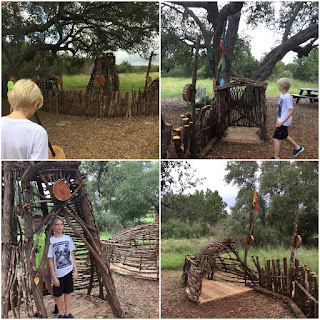 The Grand Oak Mission was a small fort made out of oak planks and circular log cuts. The boys spent more time looking at the beetles on the ground than they did interacting with this fort. The boys could not understand how the Listening Fort could be considered a fort. It was a space under some trees with a couple of brass horns and picnic tables. They thought Fort Playwire was interesting. You could walk inside the neon circles of wire but a sign stated "No Climbing". They were ready to move on to the next area. 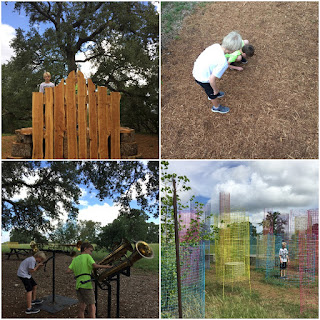 Blanket Fort was in their Top 3 list. It had three tarps stretched over a metal frame with wooden floors. It looked really neat. There was also a great climbing tree surrounding the fort that the boys had fun playing on. 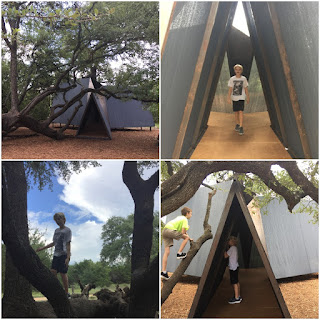 Foam Follies Fort was the first space we came to where you could build your own fort. I love the first pic in this collage where they are both scratching their heads trying to figure out what they want to build. They started with a circular fort that they could walk inside. Then they decided to use every single foam piece in their structure. It was quite a balancing act. The foam pieces felt like they were made of memory foam. They were very squishy and wobbly.  I think the boys had as much fun destroying their structure as they did building it. We probably spent 30 minutes at the Foam Follies Fort. 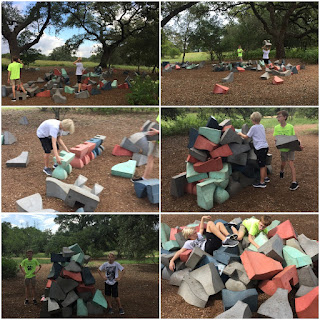 By the time we arrived at the Seedling Pods fort, the sun was shining brightly. The pods did not offer much shade so we looked at them and quickly moved on. There was a toy building set inside one of them and a game of rug checkers in another one. The boys thought Fort Playhive looked like it was made with giant Jenga blocks. It was in a nice shady spot. We stopped for a bit and had a snack before moving on. The Rainbow room had an upright piano in it. 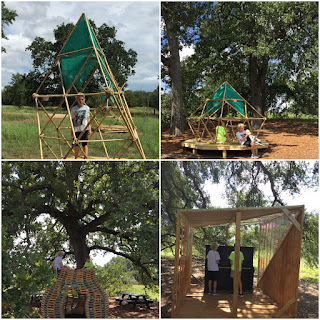 Along the trail were a couple of spots with different types of swings. It was nice to play in the shade. 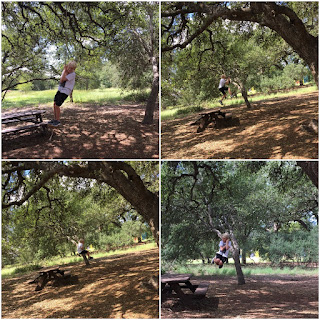 My absolute favorite spot was Fort Build. This was amazing! It was the 11th fort area. The other 10 areas were created by designers, this was a build your own thing area. It had bamboo poles, tree stumps, tree disks, cut railroad ties, hay bales, sticks, tarps, movable benches, ropes, and logs to be used to build whatever you wanted to build. I would seriously love to have this in my backyard. We stayed in this area for about an hour. I think three other families stopped by during that time. I was surprised this area only held their kid's interest for about five minutes before they went on to the next fort area. 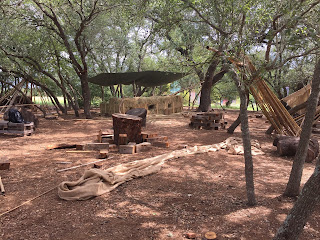 Boogs decided to use bamboo, tree logs, and a small tarp for his fort. 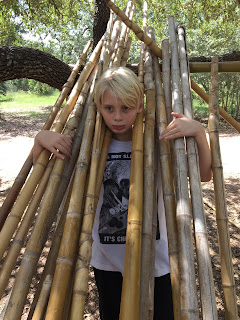 W made a tall circular fort with railroad ties then added a bamboo roof. Later he put a tarp over the entire structure. Boogs split a piece of bamboo to make a sword and poked at W through the open spaces in W's fort. 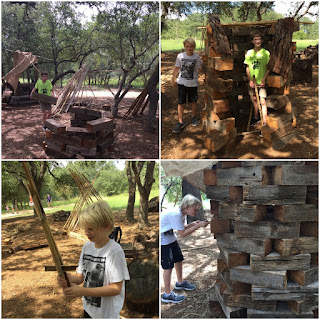 Boogs put a gate across the entrance of his fort and made a fire pit adjacent to the main structure. 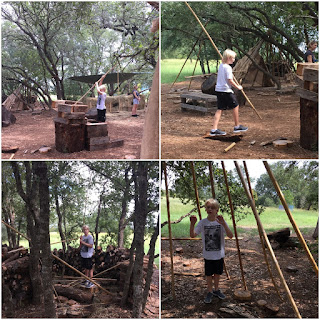 The Nomadic Forts were the last forts we saw. They were built in the middle of a beautiful meadow. The boys climbed in all of them, even in the teeny tiny one. 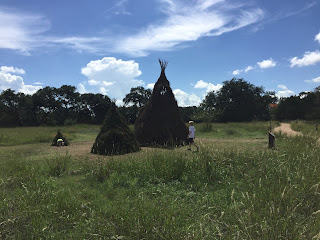 I was looking out through the window opening in the largest structure when Boogs decided to perch on my window like a bird. These structures were made with rebar and tree boughs. 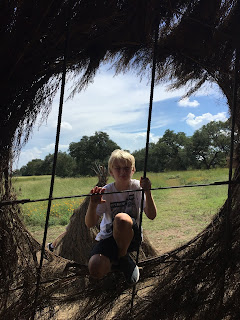 Here are the descriptions for each fort. Click each group to enlarge. 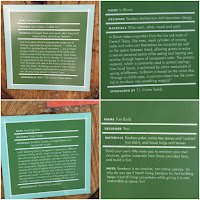 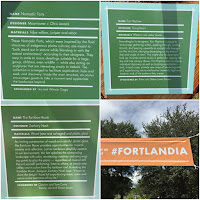 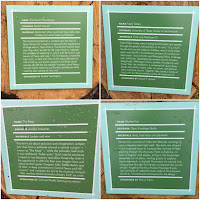 We had a wonderful time exploring Fortlandia. It opened on September 29th and will be available to tour until February 24, 2019.  I'm glad we went this weekend, so close to when it first opened. I'm sure some of the forts will look a bit worse with wear and tear and weathering by the time Fortlandia ends in February.

We had a late lunch at the Center's cafe. This was a spectacular way to spend a Saturday. The boys were hot and ready to leave after lunch, so we did not get a chance to explore the rest of the Wildflower Center. It started raining as we were walking to our car in the parking lot. Perfect timing.