Boogs really, really, really wanted a hedgehog for Christmas. He researched all sorts of things about hedgehogs and gave me a full report on their eating habits, habitat needs, care needs, activity level, variety of colors, and showed me many pictures of them. Boogs' hamster died a while back and he missed having a pet. In early, December we went to Janda Exotics Animal Ranch in Kingsbury, Texas to meet several hedgehogs and find out which one would fit best with Boogs. Boogs was able to hold six or seven different hedgehogs and he fell in love with Nebraska. 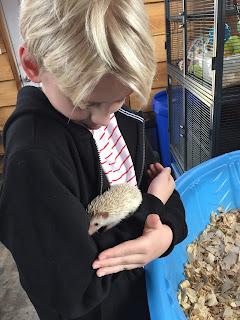 We built a special pen that is large enough for Boogs to sit in with Nebraska. That way, Nebraska has plenty of room to roam but will not get trapped behind any furniture. Isn't he cute?!? 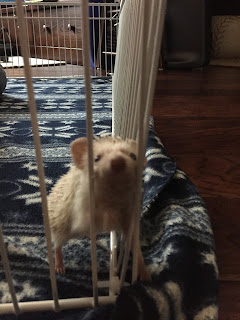 Boogs learned how to always support Nebraska's legs when he picked him up. 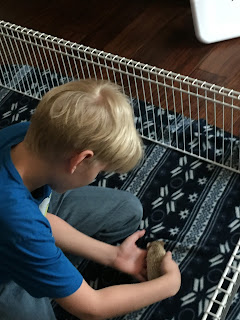 Nebraska and Boogs enjoy hanging out on the couch together. Nebraska loves his sleep sack. The blue towel is to protect the couch. Nebraska has a habit of pooping on Boogs. 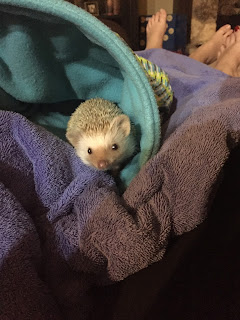 Boogs spent some time building a couple of play areas for Nebraska. The first one was too small. 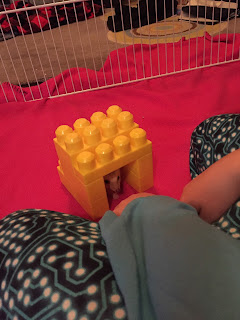 The next one was just the right size. Nebraska is funny. He would walk halfway under the block bridge, but would then turn around and go back the way he came. He never walked all the way under and came out the other side. 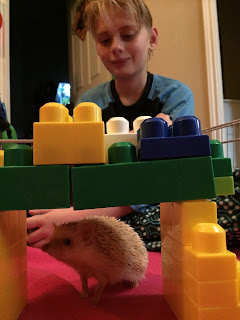 More cuddle time on the couch in a spare sleep sack. We had to get a couple of sleep sacks so that we always have a clean one. 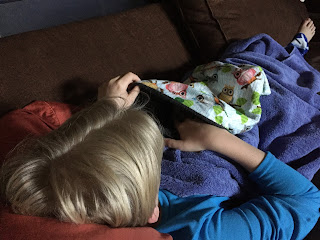 Boogs took Nebraska out to the backyard hammock for some bonding time. Hedgehogs are supposed to have about an hour a day of bonding time with their humans. Boogs used the blue towel to protect himself from poop. Luckily, Nebraska was not a poop machine that day. 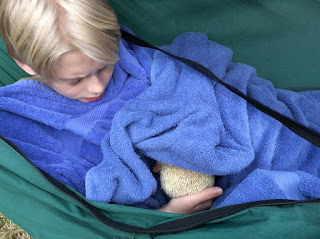 Nebraska enjoyed sniffing all the new smells outside in the backyard. Then he snuggled down and took a nap. Boogs read a book while Nebraska napped. 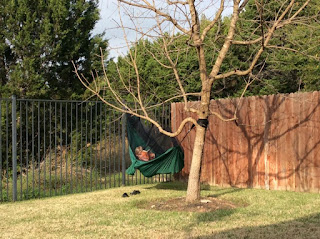 Having a hedgehog is more involved than having a hamster. Nail care has been a bit of an issue for us. I have not been able to trim Nebraska's nails. I have tried many times and I even took him to the vet to have them teach me how to do it. Nebraska was not cooperative with them either. They had to give him a mild sedative in order to trim his nails. We have to go back each time to get his nails trimmed. We have tried several different exercise wheels and finally found that the Flying Saucer Wheel works best for Nebraska. Hedgehogs have very delicate feet. They should not walk on any kind of wire mesh.

We are really enjoying our newest family member.