We took a break from this 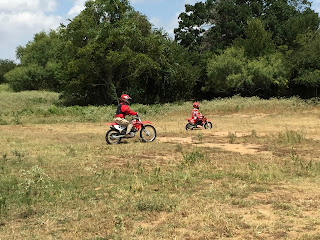 to spend the weekend at Great Wolf Lodge in Grapevine, Texas. Great Wolf Lodge opened in Grapevine in 2007. Friends have often told me what a great place it is to visit. Boogs has had several friends tell him about the MagiQuests. The quests are kind of like Sorcerers of the Magic Kingdom at Disney World. Boogs was thrilled when we told him we were going to spend the weekend at Great Wolf.

Here he is howling with the wolves at the front entrance when we arrived on Friday evening. There was a great atmosphere in the lodge from the moment you walked in - friendly staff, dance music in the lobby, quick check-in, and it was geared towards kids having fun. They gave us wolf ears to wear when we checked in. Boogs wore his while he crawled and (quietly) howled down the hallway to our room. 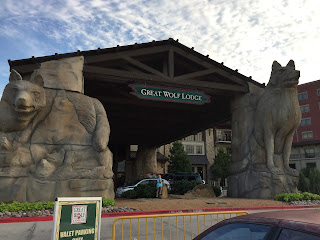 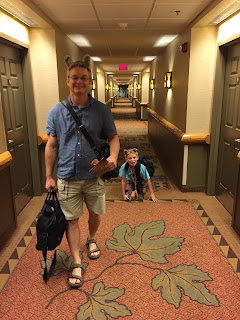 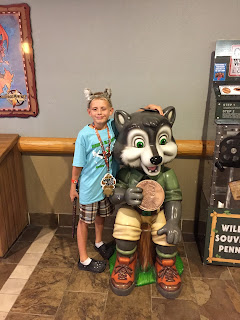 Shortly after we put our bags in our room, Boogs was ready for his MagiQuests. We went down to the Dragon's Lair (1st floor) to get his wand set up, find the Wizard to get his first assignment, and get started hunting for the runes (magical stones) needed to help the fairies and to eventually battle the dragons.

The MagiQuests required a lot of physical exertion. You had to go back and forth between all eight floors by walking up and down in the Hidden Stairwell (that is what the sign on the door said, it wasn't very hidden) to find clues and to collect the dunes. There were pictures on the walls, treasure chests, lanterns, sleeping trees, maps, and many other items that came to life when Boogs pointed his wand at them. You had to solve rhyming clues to know exactly what order and what items you needed to visit and virtually collect. We went up and down those stairs for three hours and completed seven parts of the Runes of the Questmaster game before it shut down at 11 pm.
Boogs woke up before 7 am the next morning ready to continue his quest. Boogs and I quietly left the room so Daddy could keep sleeping. Unfortunately, the quests were turned off until 9 am. Boogs thought we should use the Hidden Stairwell and scope out every floor so we would know where all of the magical objects were. Yay, more stairs. I really enjoyed spending the time with him. At 8:58, the MagiQuests started up again. We spent another couple of hours on quests, Daddy joined us when he woke up. 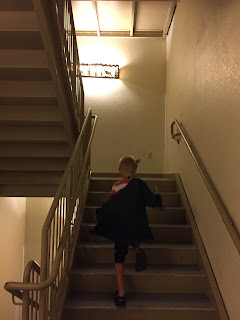 The weather was beautiful, not to hot and not at all chilly. We took a break from the quests to try out the Howlers Peak Ropes Course. The Wolf Pass package we booked included unlimited time on the ropes course for Boogs. He spent a little over two hours on the course on Saturday.
After many times of saying, "Just one more zipline and I will be ready to go swim", Boogs finally came back down to the ground. We spent the rest of the afternoon in the water park section of the lodge. I did not want to get my camera wet, so I don't have any pics of the water park. We rode all seven indoor waterslides, swam in the wave pool, spent a long time in the lazy river, and enjoyed the water. We did not go on the outdoor slides because the lines were really long.

We went back to our room to rest and clean up before dinner. Boogs was exhausted. He decided that he was through with quests and activities for the day. After dinner, Boogs rallied a bit and got a few more things checked off of his Wolf Pass: stuffed animal at the Great Wolf Creation Station, Glitz Tattoo, and personalized leather wristband from The Name Shop.
On Sunday morning, Boogs checked some more items off of his Wolf pass: Laser Frenzy (dodge your way through a laser and fog filled room) and the Howlywood XD movie (the chair shifted, rocked, and bumped up and down) and the Paw Print 3D photo.
The Howlers Peak Ropes Course did not open until 10 am. My husband and I bought wristbands so we could join Boogs on the course as soon as they opened. It was fun and a little bit scary. You had on a double linked harness so you knew you were safe but it still made me a bit queasy when I walked across the swaying beams four stories off the ground. It was SO MUCH FUN! I could have stayed up there all day. A little bit after noon, it started to get crowded on the course so we decided to go back inside and check the Paw Points Arcade off of Boogs' Wolf Pass.

We had to check out of our room at 2 pm. We checked out, put our things in the car and then went back in for another run on the ropes course. We had a fantastic time at Great Wolf Lodge. There were so many things to do. I really liked that the MagiQuests made the kids move to find the items instead of just sitting in front of a screen playing with a controller. Oh, Boogs was able to complete his quest and defeat both the Red and the Silver Dragons before we left. Boogs said he would like to go back to Great Wolf Lodge, so would I.