I had such a blast yesterday on my first ever skydiving jump! In June, my husband wrote on my birthday card - for your birthday present, how bout skydiving? I laughed back then and said it sounded like fun but inside my head I was thinking there was no way anyone was going to get me to jump out of a perfectly good airplane. I love that my husband likes to give me once-in-a-lifetime experiences for gifts. For Christmas last year he gave me a flight lesson on a teeny tiny Cessna plane. I actually liked skydiving better than piloting a plane.

Well, I was feeling brave this past week and booked my jump with Skydive San Marcos. Did you notice that the sign to the left of the plane says, "There is no such thing as a perfectly good airplane. Learn to skydive!" 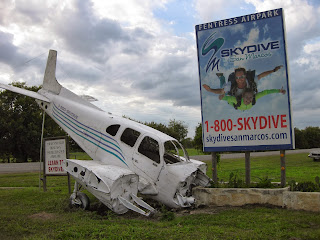 There are a few skydiving places near where we live but I am so glad I went to this one. They have a great, easy-to-use website where you can see what reservation slots are available. It was so easy to sign-up and pay. When we arrived, the facility was clean, well-organized, and the staff was fun and professional. It was a great experience.

I was pretty nervous when I filled out the death consent forms. Boogs was really worried that I would die and not be around to take care of him anymore. Poor kiddo. He was super clingy while we waited for my turn. We got to sit out in the viewing area and watch a couple of planes take off and see the skydivers land. Then it was my turn. Eeek! I loved that Skydive San Marcos had jumpsuits. My husband went on a skydive a couple of years ago and was not provided a jumpsuit. He jumped in his jeans and t-shirt and was a little bit cold while in the air. 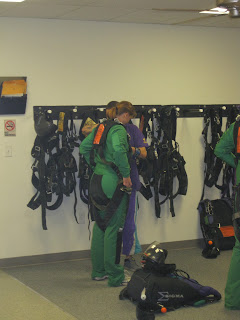 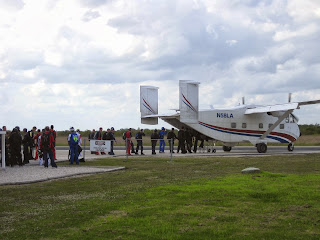 Pretty soon, it was time to get on the plane. My skydive instructor was Matt. He was wonderful! He told me jokes the entire time we were in the plane to keep from thinking too much (or puking) about what I was about to do. When I asked how many jumps he has done, he said he had jumped over 2,500 times and not had a problem, yet. 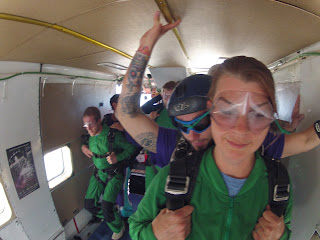 You can see my knuckles were white from gripping the straps so hard as we walked toward the exit. I was wondering if it was too late to back out of the jump. 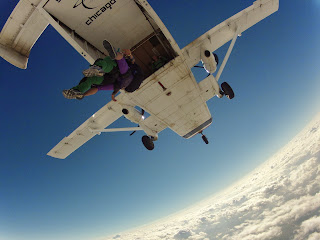 Oh man, that step into air was terrifying and exhilarating!!! 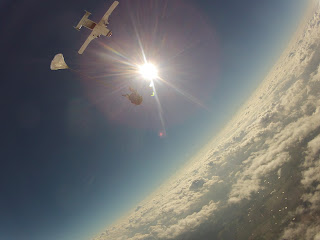 We flipped all the way upside down as we exited the plane. I just kept thinking Matt said to arch, just arch, keep arching. 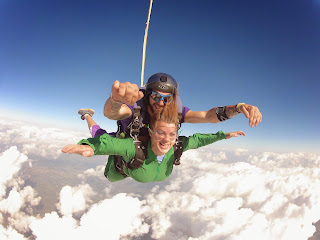 It was absolutely amazing! We reached a speed of 132 mph during our freefall. 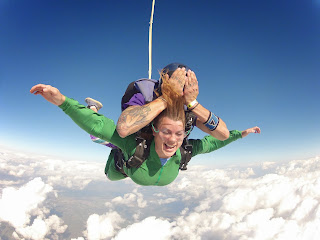 It surprised me how noisy the air was. Poor Matt, half of my hair came out of my ponytail and kept hitting him in the face. 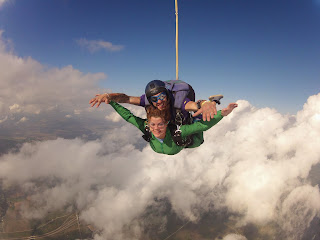 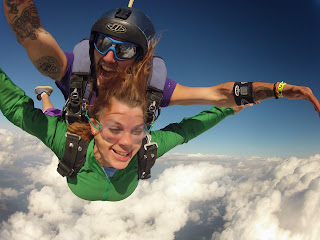 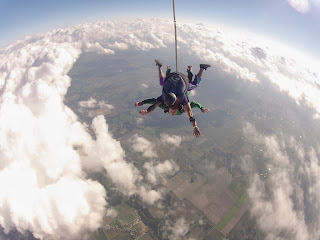 The view was incredible! 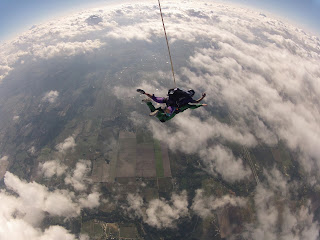 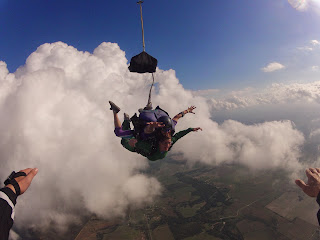 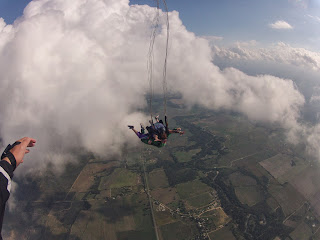 That first jerk as the parachute took in wind was very abrupt. It took my breath away. Then Matt told me he was going to loosen the staps around my chest and legs so I would be more comfortable. I yelled, "No, no, I am perfectly fine! Don't loosen anything!" He did anyway, and it really was much more comfortable. 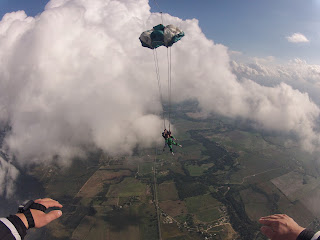 Matt let me take over the handles on the chute. I got to steer us around in a couple of circles. He put us into a pretty fast spin for a bit, I did not like that at all. It was so peaceful floating through the air. I can totally see how people crave the adrenaline rush and the amazing feeling of floating free. We left the plane in the middle of a group and were the last ones to land. I have no idea how long we stayed aloft. Joey, the camera man, took some spectacular photos and video. I wish I'd had his camera so I could have captured the views while we were floating. I could not have asked for better weather or a better skydiving experience. 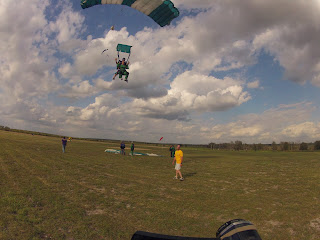 The landing went fine. Matt told me we were just going to sit down. Easy-peasy. 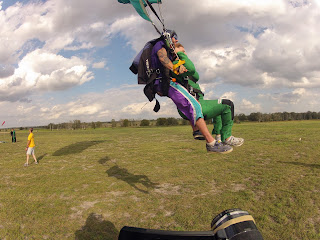 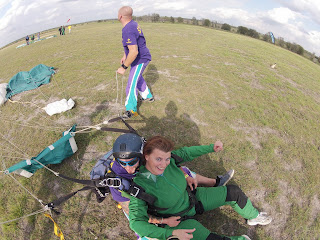 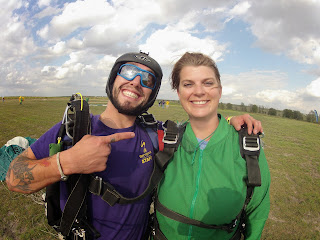 This was SO MUCH FUN!!! I am definitely going to do it again someday. I don't know when, but I will.

Thanks, Honey for a fabulous birthday present!!!

Charlotte, thanks for the mini-tutorial for uploading the video!