Boogs summer swim season is officially over. He has swam six days a week (except for the week he spent with my parents) since the middle of May. Boogs said he enjoyed being on swim team but is "relieved not to have to swim EVERY day". Silly boy, he was the one that often asked to swim after swim practice. 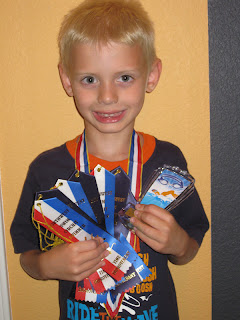 This was Boogs' second summer swim season. It is amazing to watch the endurance of these swimmers at practice. They happily swim lap after lap practicing all four strokes - freestyle, backstroke, breaststroke, butterfly. Boogs made time improvements at every meet, except for the last one. His allergies were making him sluggish this past weekend.

Boogs' end of season banquet was held last night. Unfortunately, it was raining, thundering, and lightning. Everyone had to huddle under the pool's pavilion and stay out of the pool. Coach Jordan gave out the awards. Boogs was thrilled to get a trophy for "Coaches Favorite for the 6 & Under Boys". Boogs is one of the slowest boys on the team but he tries his best.

One of my favorite things about swim meets was watching the boys dive in off the diving blocks. Our main practice pool did not have diving blocks, so the kids only got to practice off the blocks for about 15 minutes on Fridays. I named some of Boogs' diving techniques. I posted two of these pictures before, but they are too cute not to post again. Boogs is going to start a two week diving class at the end of July. So, hopefully his diving technique will improve. 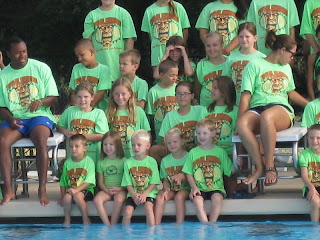 At the divisionals meet, the 6 & Under Boys tent got flooded. I was one of the tent moms for this group this past weekend. The away teams tents were set up outside of the pool area. The 6 & Under Boys tent was closest to the soccer fields. Someone forgot to shut off the soccer field sprinkler system. During the meet, one of the powerful sprinkler heads was pointed directly into our tent. Luckily, we had a fast thinking Dad nearby who dumped out an ice chest and dropped it on top of the sprinkler head. The ground was a muddy, squishy mess! We had to move the tent across the field to a dry patch of ground. The boys LOVED it. They ran through the sprinklers and mud with glee. I wonder what adventures we will have next summer. Boogs told me last night after the banquet, "I think I want to be on swim team all the way until I am in high school."
Posted by Keitha at 7:50 AM