The tradition continues...we went on our annual trip to Sweet Berry Farm to pick a Halloween pumpkin. We had a great time this year. Boogs loved playing on the trucks, boats, and hay bales. He raced through the cornfield maze so fast that, at times, I thought I would lose him. We made it through the kiddie maze in record time. My husband told Boogs to stay to the right on the path and then gradually work your way into the interior of the maze. We quickly found the bell to ring and then had Boogs take us out of the maze without any help from us. I was amazed at how quickly he found the exit. I would have taken me at least twice that long. Luckily, he has his daddy's sense of direction. 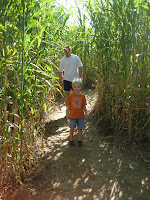 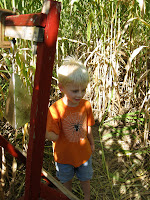 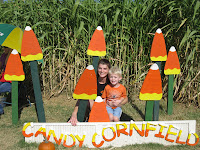 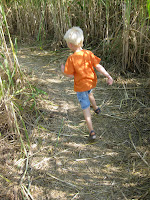 Boogs really took his time painting his pumpkin this year. First, he made a face on it. Next, he told us he wanted to make it creepy. He started putting white splotches on it. I asked what the splotches were and he said, "Those are white blood cells. They are attacking my pumpkin's face like they attack bacteria. That is pretty creepy, isn't it?" Wow, that kid has quite the imagination. We read about white blood cells in a Magic School Bus book. 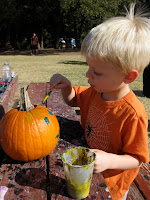 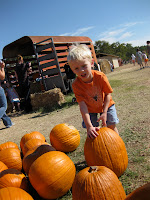 Boogs picked a pumpkin for our jack-o-lantern. Last year he wanted a "throwing-up" jack-o-lantern. This year he said he wants a spiderweb one. I am so glad that daddy is the official pumpkin carver.