Whew! We have been busy looking at houses for about two months. Three weeks ago, we thought we had found "the" house, but it did not work out. We had to keep looking. Poor Boogs has been dragged around to over 20 houses, lots, and models during the past few weeks. He has been so good throughout all of this! The funny thing is how much he soaks in when you don't think he is listening. We were playing "Pet Shop" in his room this morning. It is a game we made up where one of us has to go to the pet shop to be the pet and the other one has to pick out a pet and purchase all the necessary supplies. Today, Boogs was a hamster. In the middle of playing he said, "I have a great idea. We should talk about a new design show called "Homes for Hamsters".  Then he started describing different hamster house designs. Some were glow in the dark, shaped like keys, built with running tubes up to the ceiling… The list of his ideas went on and on. Boogs went over to his dresser and “typed in” the design changes he liked. Then he told me he was going to talk to the designer about making the changes.  I wrote down a few of the things he was saying: “Designer, could you stop putting mirrors on the cages so the hamsters don’t freak out.”  “We should add a little mini-trampoline in case a cage has a hole for the hamster to bounce back from falling down the hole.” “Momma, that designer said he can’t make our changes. We will have to go somewhere else.”  “This designer said he will do it. I want to work with the designer named Semani Sam, he is the one that will make the changes.” (I think he named him after Yosemite Sam) 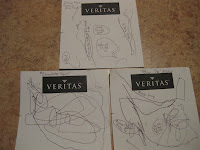 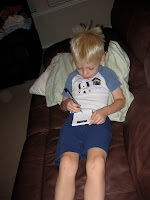 Shortly after his “discussions” with the designers, Boogs decided to become a designer. He came up with three models: Holes on Racetrack, Blue Tip, and Chocolate Spin. The Holes on a Racetrack home had holes with mini-trampolines, a racetrack tube and a swimming pool. The Blue Tip design was “a more spread out design”, with twirly vorley vents for teaching hamsters how to run fast. The maze trap in this design will “teach them how to get out of traps and dead ends like the corn maze at pumpkin time at Sweet Berry Farms.” It also has a pickle maze. Boogs did not say much about his Chocolate Spin design. I asked him how he came up with so many different designs. His answer, “I am just an expert about them.”

We think we have found a house that will fit our family perfectly. Now, we just have to get through the next six months of selling our house, building the new one, temporarily living in an apartment, and everything that goes with all of that. Keep your fingers crossed that it will run smoothly and on schedule. Here is a link showing the model of our new home.
http://tours.tourfactory.com/tours/tour.asp?t=444614
Posted by Keitha at 8:51 AM