We looked at two stories this week - The Three Little Pigs and Goldilocks and the Three Bears. The kiddos were familiar with these stories. While we read the Three Little Pigs, we acted out the story using wooden peg dolls and paper houses. The paper houses were great because the kiddos were able to work together and pretend to be the big bad wolf. The houses were light enough that they could huff and puff and blow them right off the coffee table. We made a block house for the brick house so that it could not be huffed and puffed off the table. We also used the peg dolls to act out Goldilocks and the Three Bears. Each child got to go home with 3 paper houses, 3 small peg dolls and one large peg doll. I could not believe how long they played with these. The pattern for the houses came from Frugal Family Fun Blog
http://www.frugalfamilyfunblog.com/2010/08/rainbow-village-printable.html 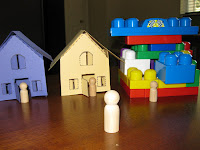 After story time, we went into the kitchen for our cooking activity. We made homemade bear biscuits. The kids really enjoyed working the butter into the flour with their hands. They decorated their biscuits with mini chocolate chips, except for Boogs. He ate his chocolate chips because they were too yummy to put on his biscuit. I think the kids used at least half a bottle of honey while they were eating their bears. 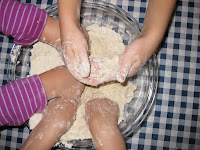 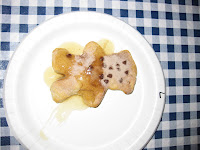 During outside play time, I filled the swimming pool and the water table with bubbles. We also had the wavy sprinkler on. Boogs is really going to miss these Mondays with his friends. 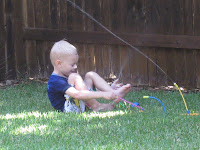 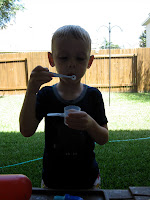 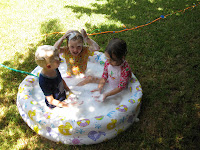