Boogs is OBSESSED with Halloween. He has been since he was 18 months old. I remember, when he was 18 months,  he stood at the door and cried for several days after Halloween because he wanted to go trick-or-treating again and again. He loved wearing his costume and knocking on the neighbors' doors. I did not let him eat the candy, so candy is not a big part of his obsession. He loved the decorations. 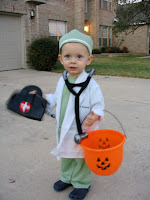 That obsession has not lessened over the years. I had to make a rule this year that we won't listen to his Halloween CDs in the car until October 1st. He could spend hours looking at Halloween displays in stores. The Halloween displays are already up at most stores and Boogs is already starting to beg to spend time wandering around looking at everything.  Yesterday afternoon he looked through the displays at Walgreens. 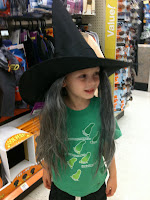 Unfortunately, his fears have gotten bigger. During the past few months he has started to have an occasional nightmare. I know it is a common thing for kids his age to have nightmares, but his Halloween obsession is not a good combination with nightmares. Last night he cried out at 1 a.m. because he was scared. I was able to give him a hug and get him back to sleep. Then around 3 a.m. he woke up screaming about being scared. I spent an hour in his room and he started to calm down. When I left his room he started screaming again. I went back into his room and he was huddled against his pillows in the corner of his bed with a freaked out look of terror on his face. I snuggled up with him in his bed and sang his night time song a couple of times and he finally went back to sleep a little after 5 a.m.  He woke up this morning at 7:15, leapt out of bed and yelled, "Wow, it is bright outside. I had a good sleep!" I hope this is not his new definition of "a good sleep".  During the daylight, his fears magically disappear. Now, I just have to figure out how to avoid all the Halloween displays for the next two months so he won't have such vivid nightmares.
Posted by Keitha at 8:53 AM