Cutesy the Elf Is Back!

Boogs is now 12-years-old. I was not sure if Cutesy the Elf would be returning this year. Boogs mentioned the return of Cutesy right after Halloween. So, Cutesy is back for his 8th year with us. 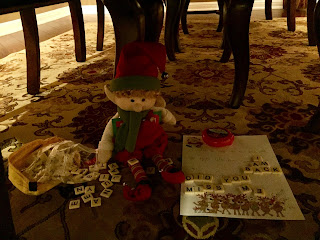 Boogs found him hiding under the dining room table on December 1st. Cutesy wrote a message and then added Bananagram letters to the note. Cutesy brought a Santa Bubblegum Tape dispenser with him. Boogs was happy to see that Cutesy did not take a big bite out of the gum like he did a few years ago. 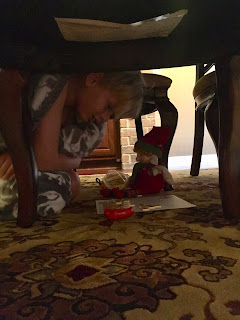 Every year, Cutesy decorates Boogs' bathroom with this Santa shower curtain, rug, and lid cover. This year, Cutesy added a creepy snowman in the tub. From the doorway, it kind of looks like a body in the tub. Boogs is 12, Cutesy would never have done this when Boogs was little. Now it is funny. 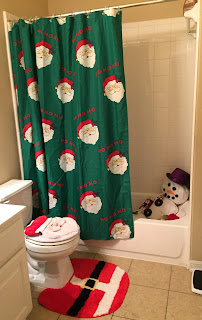 Boogs yelled when he first saw it. He said he was barely awake and it scared him. He thought someone was hiding in his shower. 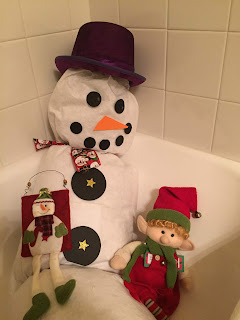 On day 3 with Cutesy, we found Cutesy sitting inside a plastic container. An attached sign said, "Oops! I tooted. Wanna smell?" 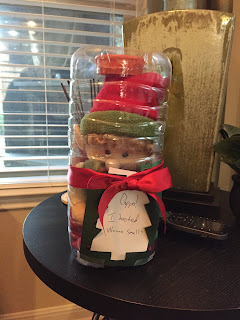 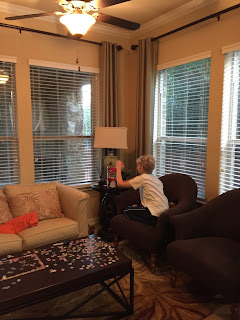 Of course he had to take a sniff. Boogs told me it smelled like peppermints. He even found a couple of peppermints taped under the fold of Cutesy's hat. 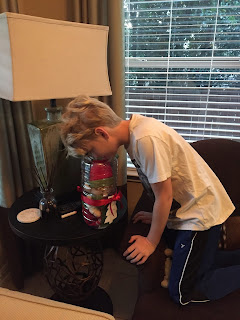 Boogs has a holiday band concert on December 4th, so Cutesy wanted to wish him luck. Cutesy was hiding in the curio cabinet with his own trombone. Cutesy's trombone was made out of Wikki Stix. 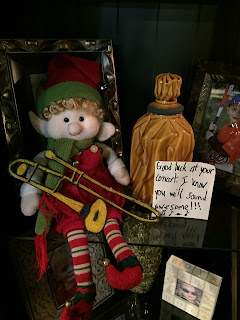 What are your elves doing this year? Cutesy needs all the inspiration he can get. You can find all of Cutesy's adventures for the past seven years on my Cutesy the Elf Pinterest board or by clicking the "elf" tag after this post.