Unfortunately, D and I were unable to plan a JBoys camping trip this year. In the past we have taken epic roadtrips together with her four boy and Boogs. Boogs was able to invite J2 to spend a couple of days with us. It has been disgustingly hot in Texas. On Monday, it was 110 degree F (43 degrees C). The boys spent Monday afternoon inside with the air conditioning running full blast. It was even too hot to take a trip to the pool. The boys spent time battling each other on their DS games. 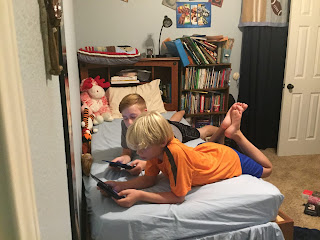 They played a mean game of hide-n-seek in the house for almost two hours. When you found the person hiding, you got to shoot them with the Nerf Rival gun that shoots "high impact" balls instead of the suction cup darts. Those balls hurt! Boys! 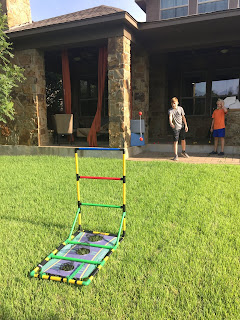 A little after 6 p.m. they decided to brave the heat and play a game of Ladder golf. We set the ladder up in different places in the yard to get the most shade. They ended up throwing from the porch so they would not be in the sun. 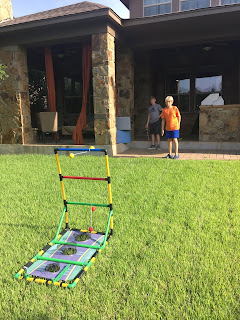 We had a "cold front" blow in Monday night. The high temperature on Tuesday was only 99 degrees F (37 degree C). It was a welcome change in temperature from Monday's high. We really lucked out because I had bought tickets to Typhoon Texas the previous week. Tickets are $34 per person at the door but I was able to find an online early bird purchase for only $18.99 per ticket. I actually had Typhoon Texas confused with Rockin' River, a place we had been before. We had not been to Typhoon Texas, it opened in May. 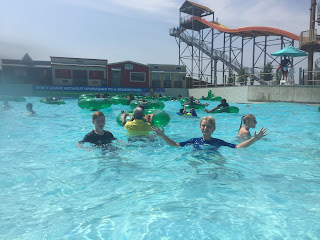 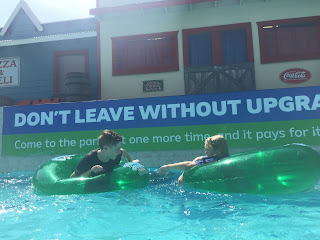 Then we headed over to the Lonestar Racers slide. This was my favorite thing in the entire park! 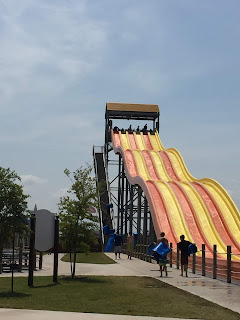 The four of us kept racing each other down the slide. We were very lucky that the park was not crowded. We did not wait more than 7 minutes for any ride. I guess the high temperatures of the previous few days scared people away from outdoor activities. 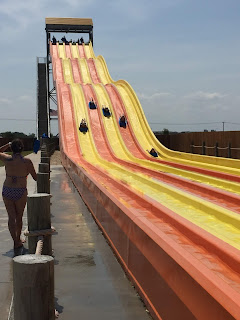 My husband won most of the races. I think he cheated by pushing off a bit early before the green light, he says he didn't. :-) 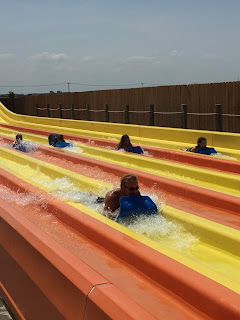 Our next favorite rides were the Duelin' Daltons two person tube rides. There were three different tubes to chose from. The boys liked the purple tube the best, it was the fastest. 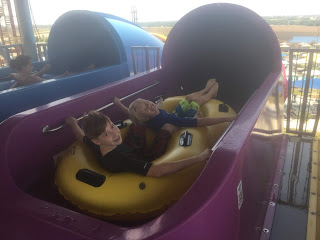 Look at that steep drop at the end. 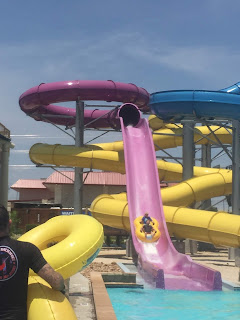 The boys glided across the water. 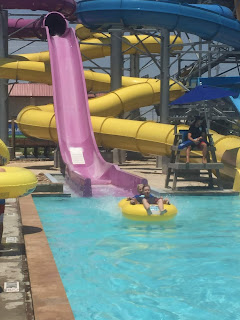 They had a lifeguard near the purple tube exit. It was their job to catch the people coming out of the purple tube so they would not bump or go over the end of the pool. The lifeguard missed catching my husband and I and we bumped the edge of the pool but did not flip out of it. It was a fun ride. My favorite tube was the yellow one and my husband's favorite was the blue. We went down these tubes at least 20 times throughout the day. 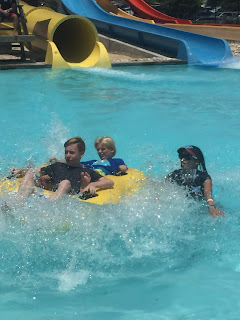 Another fun ride is The Snakepit. You go down these tubes without a mat. The light blue and the green slides were the fastest. I got a little claustrophobic on these. They were very dark inside. The dark blue colored slide was so slow it was not very fun. 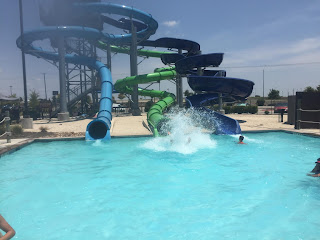 The boys spent a lot of time going on this ride. My husband liked it, too. 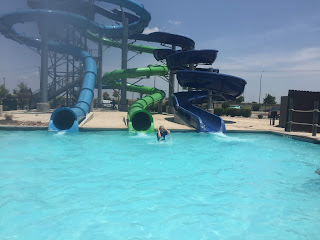 We accidentally lucked into Two for Tuesday deals. The hot dogs were two for one and the icees were also two for one. We had a quick lunch and rest before continuing our day. 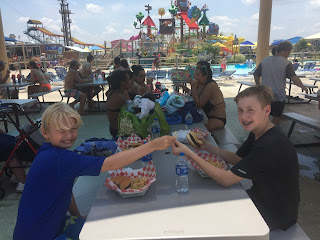 After lunch, the boys put on their closed-toe shoes and headed over to the ropes Challenge Course. 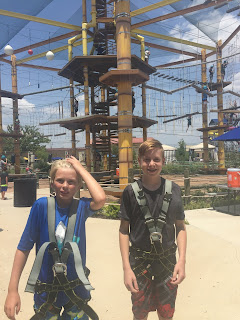 It had three levels of obstacles. I liked how the park set this up. You had to complete three obstacles on each level to show you were competent before you were able to move up to the next level. 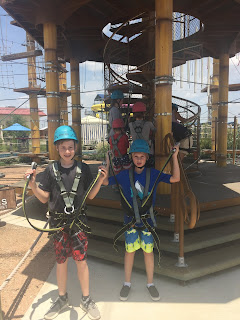 The safety lines had a feature that only allowed you to release one line at a time so you were always hooked in. The boys had a blast! I was a bit jealous. I sprained by knee a couple of weeks ago so I could not participate. My husband decided it was too hot to participate. 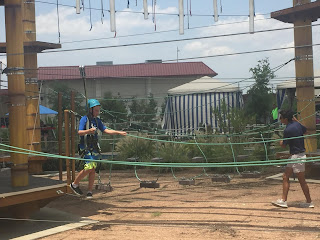 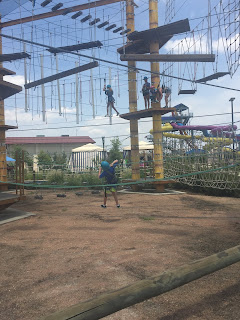 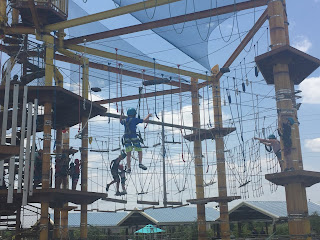 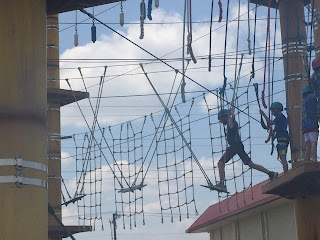 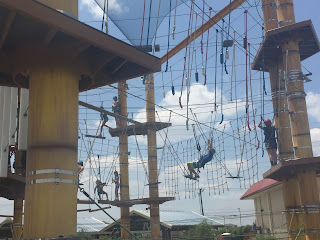 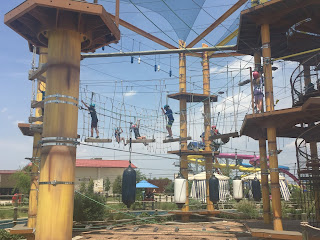 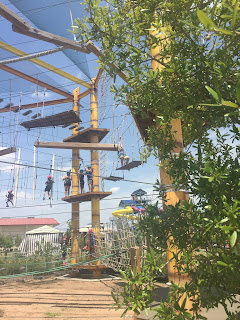 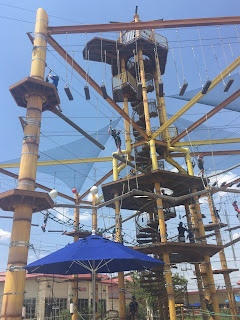 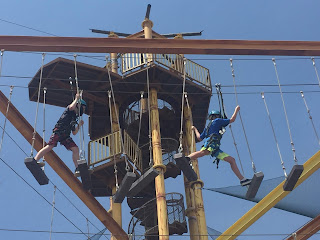 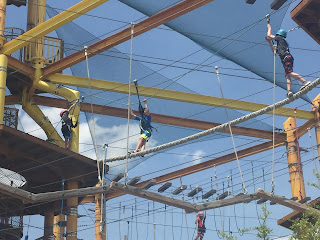 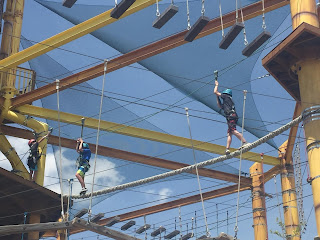 They climbed for about an hour. Then cooled off with an Icee drink before heading over to the Lazy-T river. We spent quite a while in the river before going back for more rides.

The park is open from 10 am to 7 pm. We arrived around 10:45 and left at 6:45. It was not our intention to spend the entire day at the park, but we were having so much fun none of us wanted to leave. We were so lucky to be there on a relatively cool day without crowds. I think we will definitely go back again. Typhoon Texas also has a zipline tour, but it costs $12.99 extra. Maybe we will try that some other time.

We ordered pizza for dinner because I was too tired to cook when we got home. The four of us watched a Rocky movie in the theater room and then went to bed.

J2 had to be back at 11 Wednesday morning so we had to leave our house before 10 to make it to Temple for the handover. I'm so thankful D meets us halfway instead of driving all the way out to their house. I miss them living 5 minutes away from us. After breakfast, Boogs and I taught J2 how to play Egyptian Rat Slap. This card game is hilarious! Boogs and I have played it with several different friends and we taught Daddy how to play it on our Bonaire vacation. There are way too many rules to keep up with, that is what makes it so challenging and fun. You can find the rules HERE. (this site calls it Egyptian Rat Screw) These rules are pretty close to the way we play. 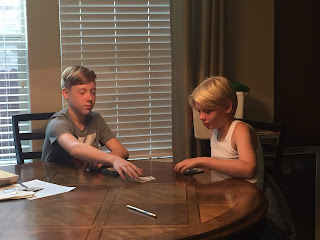 We were very sad to take J2 home today. Hopefully, we will get to see him again before summer is over. Next week and the week after, Boogs has diving board camp two hours a day. Next week he also has trombone sectionals practice for 1.5 hours a day. I have to go back to work on August 9th. That is going to be here way too soon.