Grandmaman, I realized that I had skipped writing a post about our last trip (Spring Break) with the JBoys before they moved out of town. We have been going on camping trips with my friend D and her four boys for the past six years. D's mother-in-law has some property in West Texas that she let us stay on for a week. The boys loved the freedom of wandering around and exploring on their own. Our main rule was that they had to be within yelling distance. 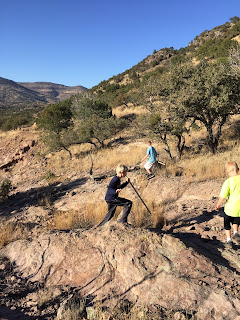 D wanted everyone to have walking sticks for this trip. She looked for something to use and ended up purchasing closet hanging rods. The boys each chose/drew a design to put on their walking stick. Then, they helped use a wood burning tool to transfer their design to their stick. The sticks were really helpful. The terrain was rough, rocky, and steep. We were also a little worried about snakes and the sticks helped keep them more upright instead of grabbing at rock holds with their hands. Luckily, we did not see any snakes in the area. We were also happy to have missed out on seeing any of the mountain lions in the area, too. 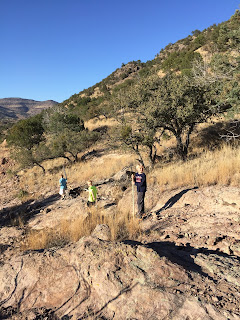 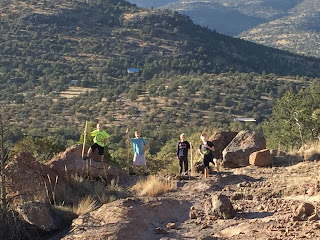 The boys had a great time exploring. They were very good about staying together and not leaving anyone behind. 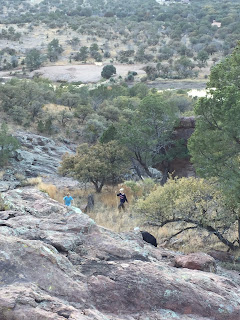 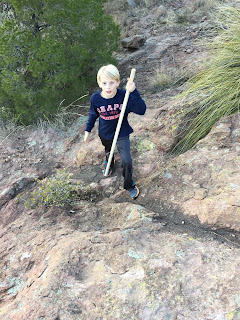 The area is home to wild donkeys. D's MIL put out feed for the donkeys the evening that she left. The next morning, the donkeys were surrounding the feed containers and our vehicles. Wow, were they noisy. I was a little worried about my car when a couple of donkeys started fighting and kicking at each other. We made the boys stay on the porch until they donkeys left the area. 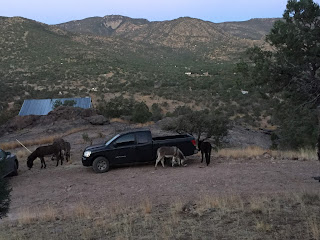 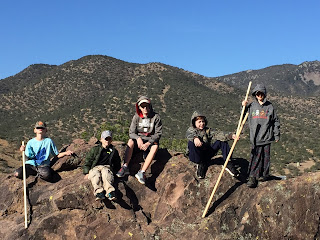 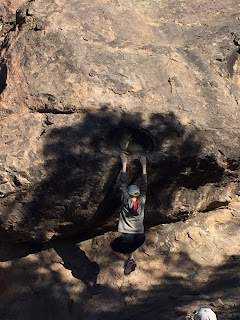 There was a mostly-dried-up pond at the bottom of the hills. We walked down to it with the boys. Boogs walked through a particularly muddy spot and his shoe got sucked off his foot and into the mud. I had to dig for it to find it. 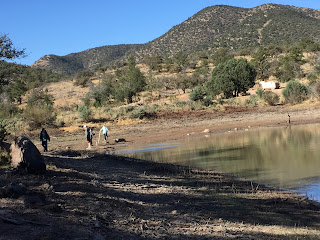 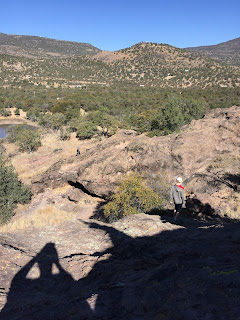 It was fun to conquer some of the taller hills. 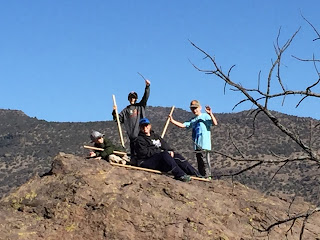 R took the 5 boys for a hike and climbed the hill behind the cabin. They were gone for hours. They were worn out, tired, and grumpy by the time they got back. (I climbed up and down that hill the next morning in 1.5 hours by myself. The views at the top were gorgeous.) 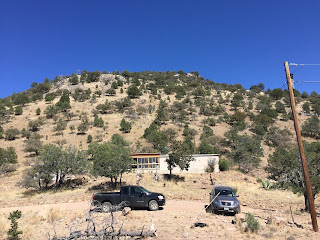 We booked tickets for the McDonald Observatory Star Party several weeks before our trip. I was really looking forward to it. The star party began at dark with a researcher sharing information about the constellations while using a laser pointer to show them in the sky. It was an amazingly clear night and there were so many stars visible. After the information portion of the program, visitors were given the opportunity to look through many different telescopes of differing sizes. There was a guide at each telescope telling information about what each particular telescope was aiming at in the sky. Unfortunately, the boys were exhausted after their 6 mile hike in the heat. We only looked through three telescopes before we gave up and left. I was really disappointed, but a couple of the boys were literally laying on the pathway and falling asleep while waiting their turn at the telescopes. 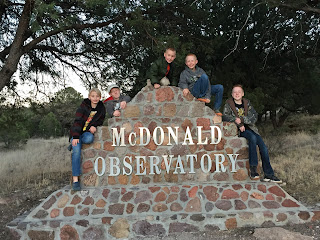 One morning, D took the boys to a rock shop and came back with geodes. It took a lot of effort to crack the rocks. 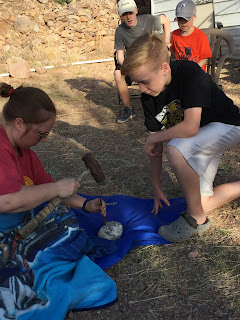 J2's geode split almost perfectly in half.
J4's geode broke completely apart, but he still liked it.
It took awhile to get a picture of J1 with his geode because 15 is an interesting age. 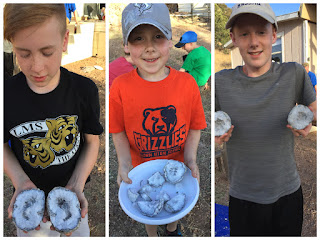 Boogs' geode split pretty evenly.
J3's geode split with just a small chunk falling off. He asked to keep the rest intact because it look so cool. 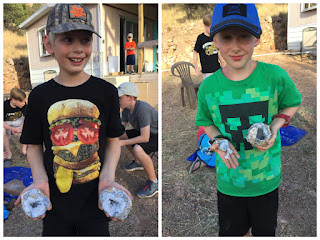 We loaded the boys in the back of the truck and took them to a couple of different hiking paths. 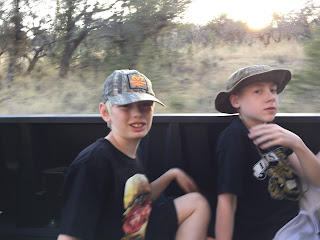 The Fort Davis Mountains area is beautiful. I enjoyed visiting it, but I could never live in such a dry, brown place. 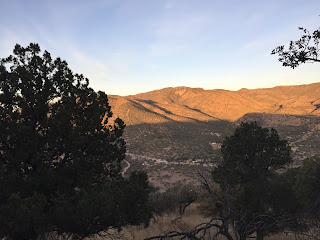 In between exploring adventures, the boys set up chairs for bases for a game they invented, played quite a bit of badminton, played board games & cards, and also had books to read. They shot bow & arrows and hit targets with a slingshot. 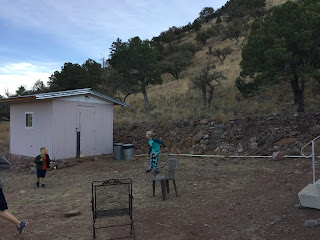 We explored the local attractions. The Rattlers & Reptiles shop was "interesting". It was kind of rundown and smelly. There were many poisonous snakes in there and I did not feel like the cages were secure enough. :-) 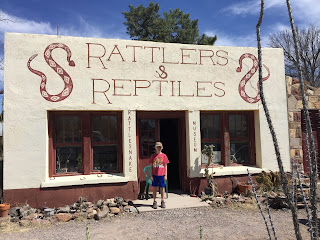 We had to stop at the local train caboose ice cream shop for a cone. We went to several museums in the area. We even spent several hours at a laundromat. 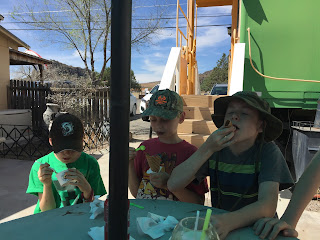 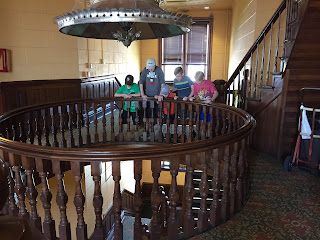 We were able to climb five levels to look out the top of the court house rotunda and enjoy the view. 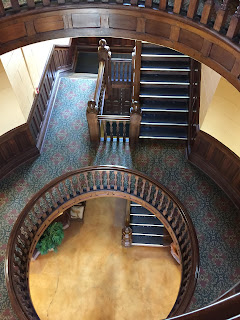 On the drive back to the cabin, we stopped at a rest stop with huge boulder hills behind it. The boys climbed it to the tippy top. 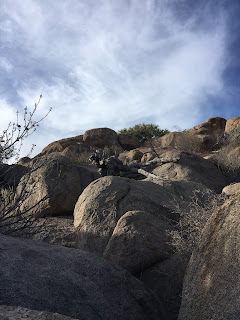 We went to Marfa one night to try and see the mysterious Marfa Lights. Some of us thought we saw them.  We did not get any good pictures of the lights.

On our way back home, we stopped off at our favorite place to swim - Balmorhea State Park. The water was freezing cold but it did not seem to bother the boys. 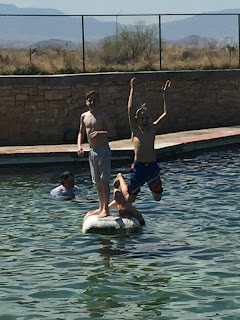 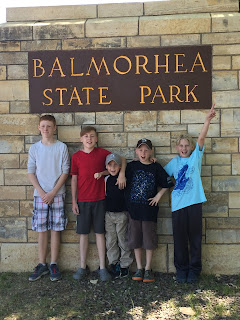 Here is a picture of their first trip to Balmorhea together in 2014. They have grown so much. I am sad we were unable to take a summer trip together this year. I hope we will be able to go on more adventures with them in the future. At least they only moved two hours away from us and we are still able to visit. 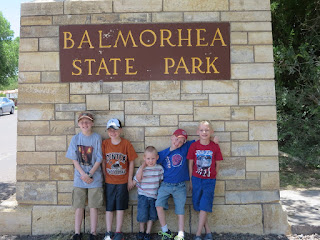