The slogan for the capital city of Texas is Keep Austin Weird - the slogan is used to promote small/independent businesses and creativity in Austin. Last week, Boogs and I went with K and her kids for an adventure in downtown Austin. 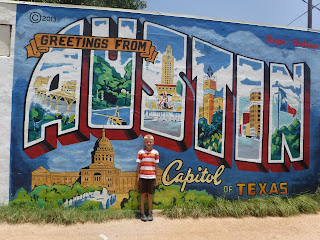 The Greetings From Austin mural was touched up shortly after we last posed for pictures with it. Here is a picture of Boogs in front of the sign in August 2013. The sign looks much better now. Boogs has grown a lot in two years. 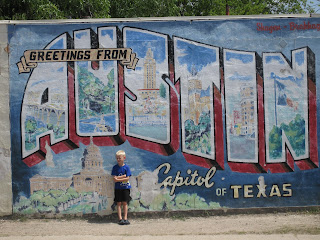 I had fun watching K doing back bends to get the perfect angle for her pics. 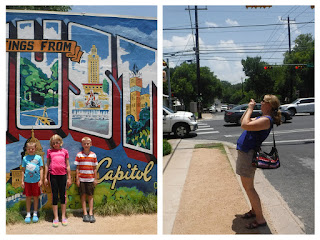 A graffiti park recently opened up in Austin near the Baylor St. and 12th St. It is called the Hope Outdoor Gallery. We thought we would go have a look. 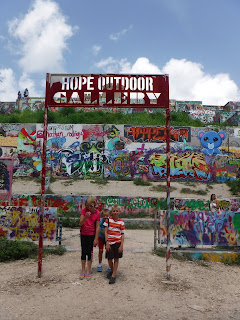 I was impressed that we did not see any profanity painted on the walls. There was a little shop that rented rollers, ladders, and sold paint and spray paint. There were several people painting while we were there. We asked the kids if they wanted to paint anything on the walls but they said they did not want to cover up the artwork that was already there. 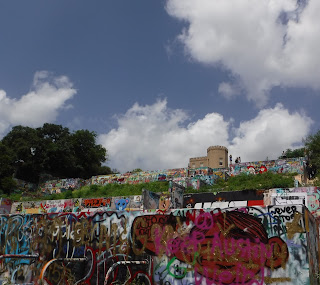 The castle building at the top of the hill made a neat back-drop. The incline was too steep for the kids to climb safely all the way to the top. There was a man in need of rescue blocking the path to the top. There were 8 uniformed rescue workers trying to figure out how to slide him down the hill with a tarp and rope pulley system. They had placed a splint on one of his legs. There were able to get him down and into an ambulance before we left. 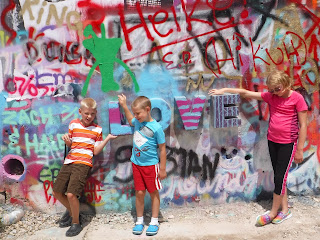 The kids were really interested in seeing all of the paintings. Boogs had his own camera to take pictures. It was really neat to see what caught his interest. 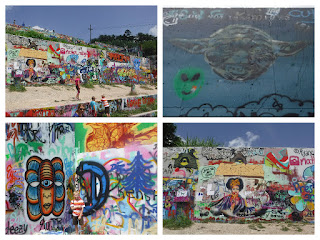 We took the kids up to the second level. It was a big effort to get them up there because it was very slippery and there was a ton of broken glass everywhere. I would have felt more comfortable if they were a bit older. This was a really neat place to visit. I am glad we went. 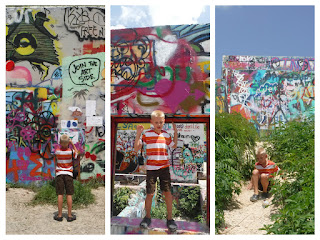 Our next stop was a visit to the BIG TOP CANDY SHOP on South Congress. Yes, it does have to be capitalized. The kids asked all morning when we were going to get there. 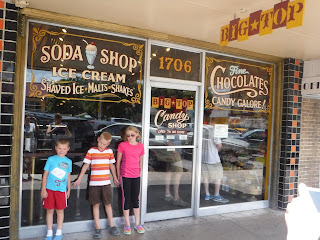 This place is candy heaven. We probably spent an hour browsing through all of the different kinds of candy while the kids made their selections. It seems like bacon flavored candy is big right now. 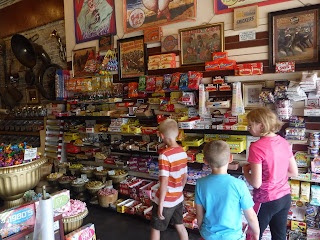 The walls in the shop are covered with neat circus-style signs, instruments, and taxidermied animals. Here is Boogs standing in front of a bear holding on to a selection of honey sticks. 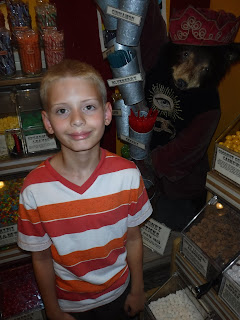 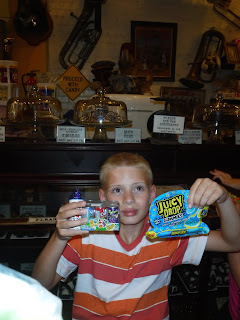 We told the kids they could not eat their candy until after we had lunch. We went to Magnolia Cafe on South Congress. Back in the day (oh my goodness it was 20+ years ago) I used to go eat at Magnolia Cafe at 2 a.m. after the dance clubs closed. It was one of only a few restaurants that were open 24 hours a day. 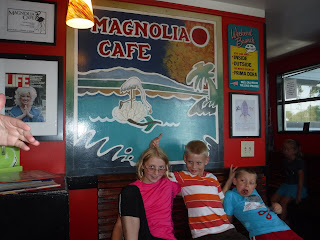 The kids loved the chips and salsa! We sat outside on the patio for a long leisurely lunch. 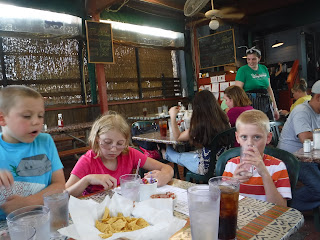 K and I were worn out but the kiddos still wanted to play. We told them they could play at K's house ONLY if they played outside. They thought that was a great idea. They spent almost two hours running up and down the hill in the backyard. I don't know how they had the energy for that. I was exhausted just watching them. 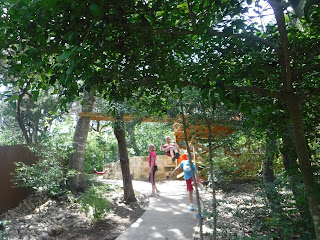 I had no problem getting Boogs to bed that night. He was worn out from our Keep Austin Weird day.
This post is linked to: