Last year, Daphne and I took our boys on a summer trip to Crater of Diamonds State Park in Arkansas and we also camped for a couple of nights at Colorado Bend State Park. This year, we planned a six day camping trip in Texas and New Mexico.

On Sunday (07/13), we had a really rough start to our trip. It was a ton of work trying to cram 7 people (five of them under the age of 12), 3 carseats/booster seats, and all of the stuff for a week of tent camping into my Pathfinder and a borrowed rooftop cargo carrier. Daphne was planning on taking two tents but her large tent would not fit in the carrier so we had to leave it behind. It was quite a feat to get everything loaded. 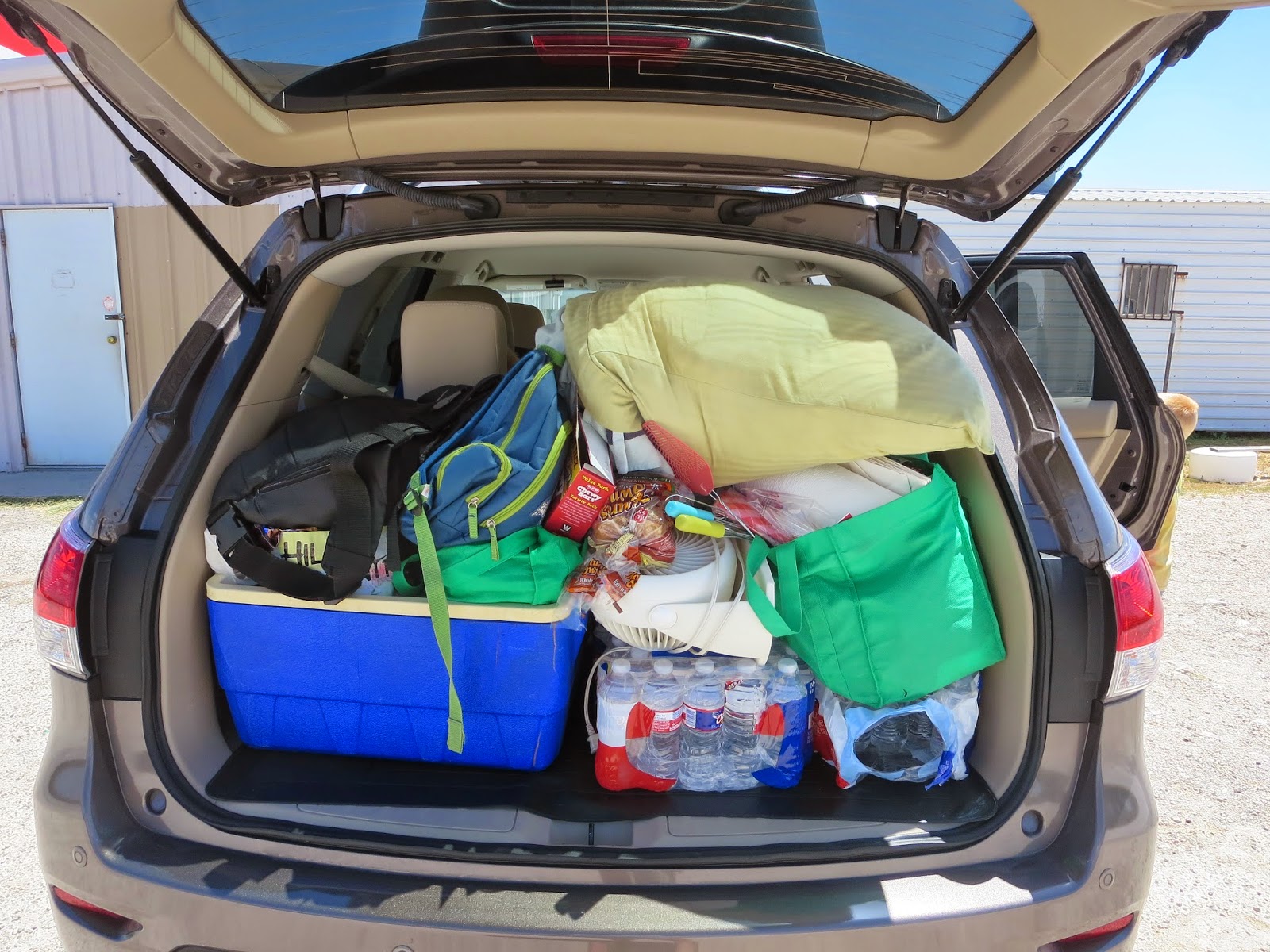 It took us at least an hour to travel the first 30 miles of our trip. One of the kiddos got carsick, we kept having to pull over for him to puke. Luckily, we are resourceful gals and came up with a substitute barf bag for the car. The beef jerky bags are airtight and leak proof, YAY! Sadly, I have a weak stomach and when we pulled over for the sick kiddo, it made me sick too. Once we got that out of the way, our trip went much faster. Daphne thought it was hilarious that I had to throw up. I don't know why but Daphne and I ended up with a case of the giggles about the start of our trip. We were laughing so much, the boys asked if we were okay. After being on the road for a couple of hours, we decided to stop for lunch. We unloaded all 5 hungry boys and went into a Dairy Queen. There was a long line with very slow service so we put everyone back in the car and told them we would eat at the next town. We drove another 30 minutes and got everyone out again to eat at a BBQ place. We stood in line for about 10 minutes then decided against BBQ. When we got close enough in line to read the menu, the lunch plates were $15 each. Those poor hungry kids were loaded back in the car and told we would eat at the next place we found. Thirty minutes later we ended up at another Dariy Queen and FINALLY let the kids eat. This of course, brought on another case of the giggles. Our boys really were great in the car.

We arrived at Balmorhea State Park around 5 p.m. The drive should have taken us a little over five hours, we actually made it in 8 hours. 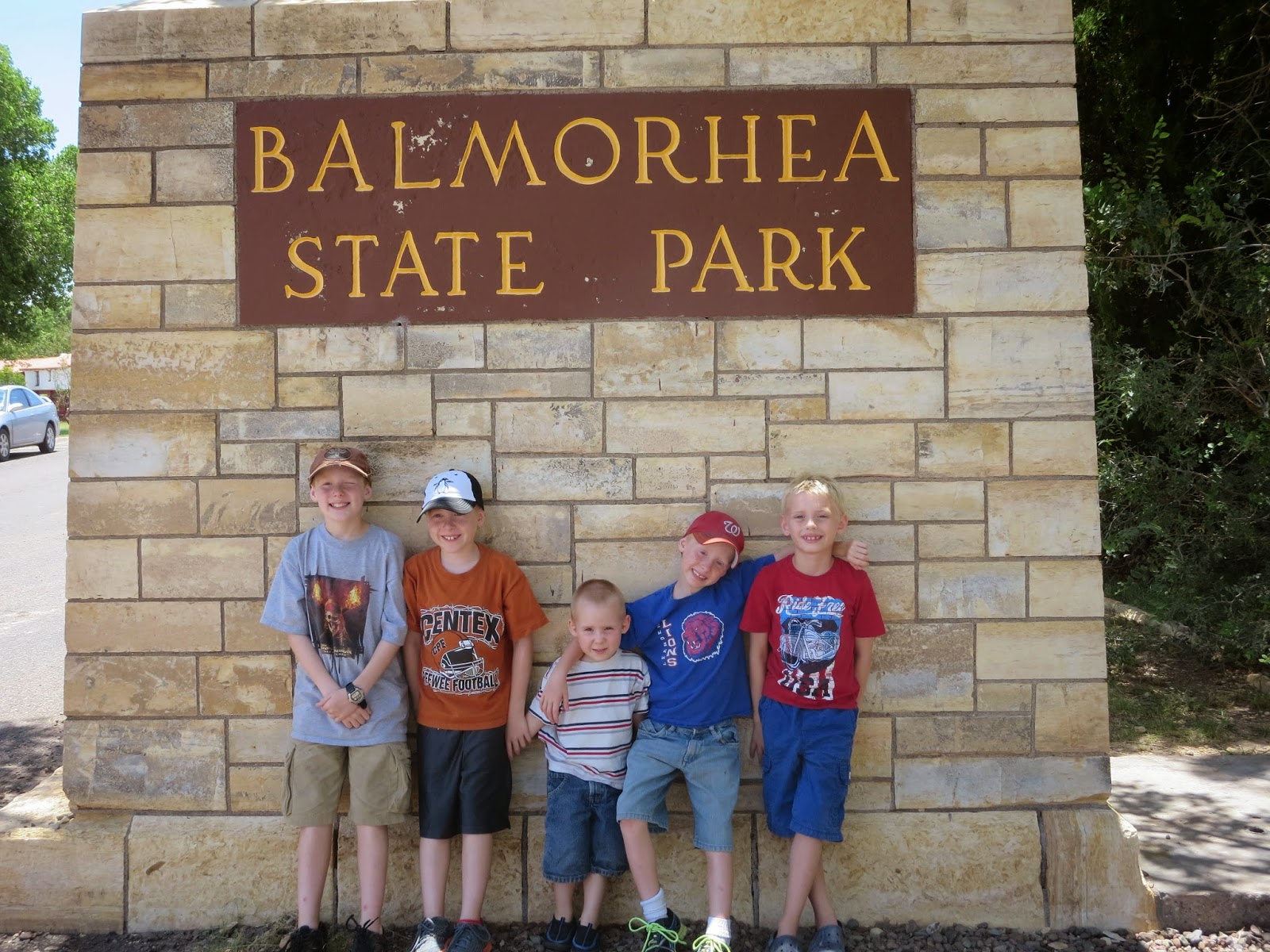 Balmorhea is beautiful. It has the world's largest spring-fed swimming pool and covers 1.75 acres with a capacity of 3.5 million gallons of water. The shallow end is 3 ft deep and parts of the pool are 25 feet deep. There are a lot of fish living in the water. At first, Boogs was worried about swimming with some of the larger catfish in the deep end. He soon stopped worrying about the fish. 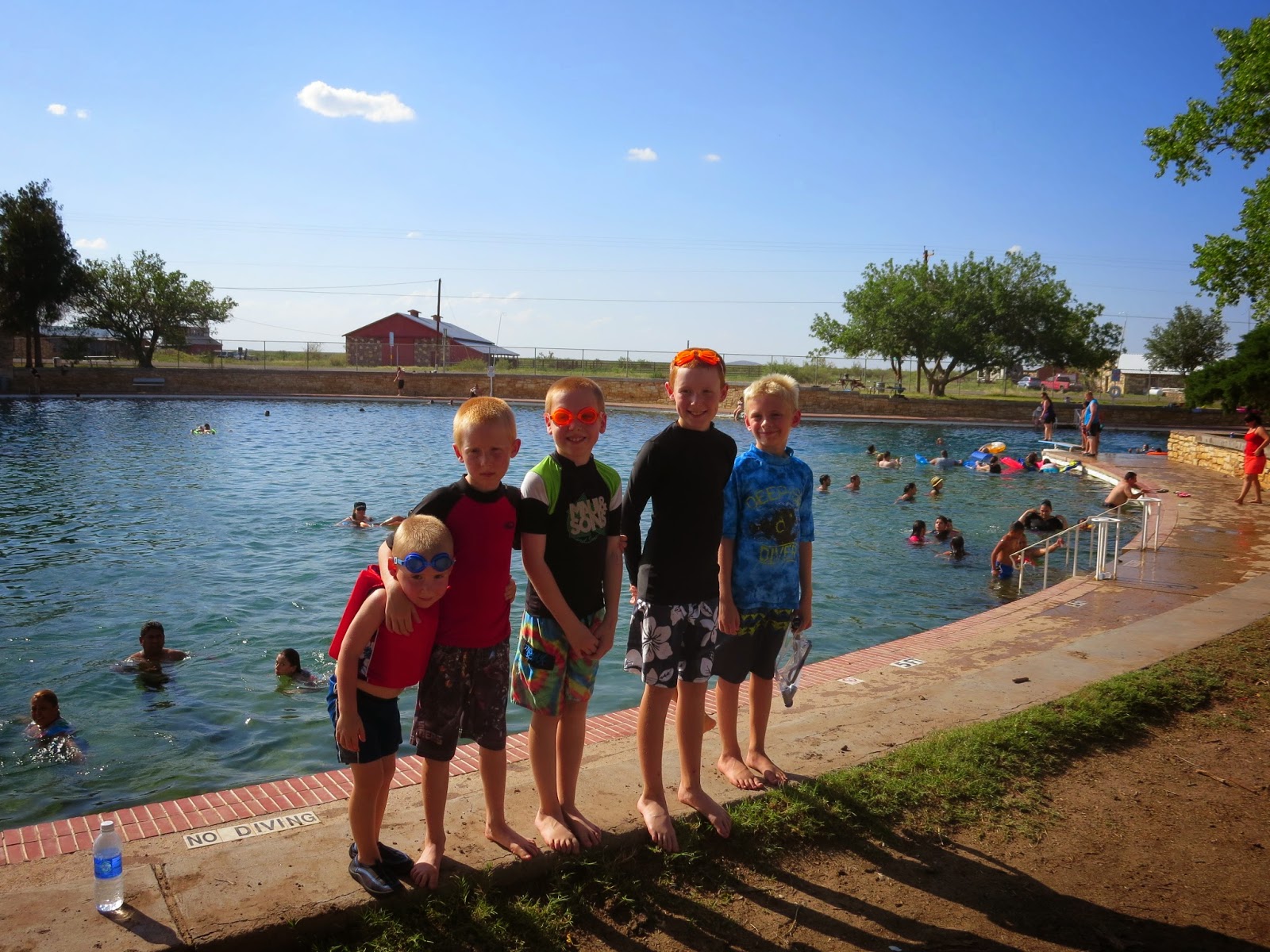 The boys were ready to swim with goggles and snorkels. They also had two pair of fins to share. 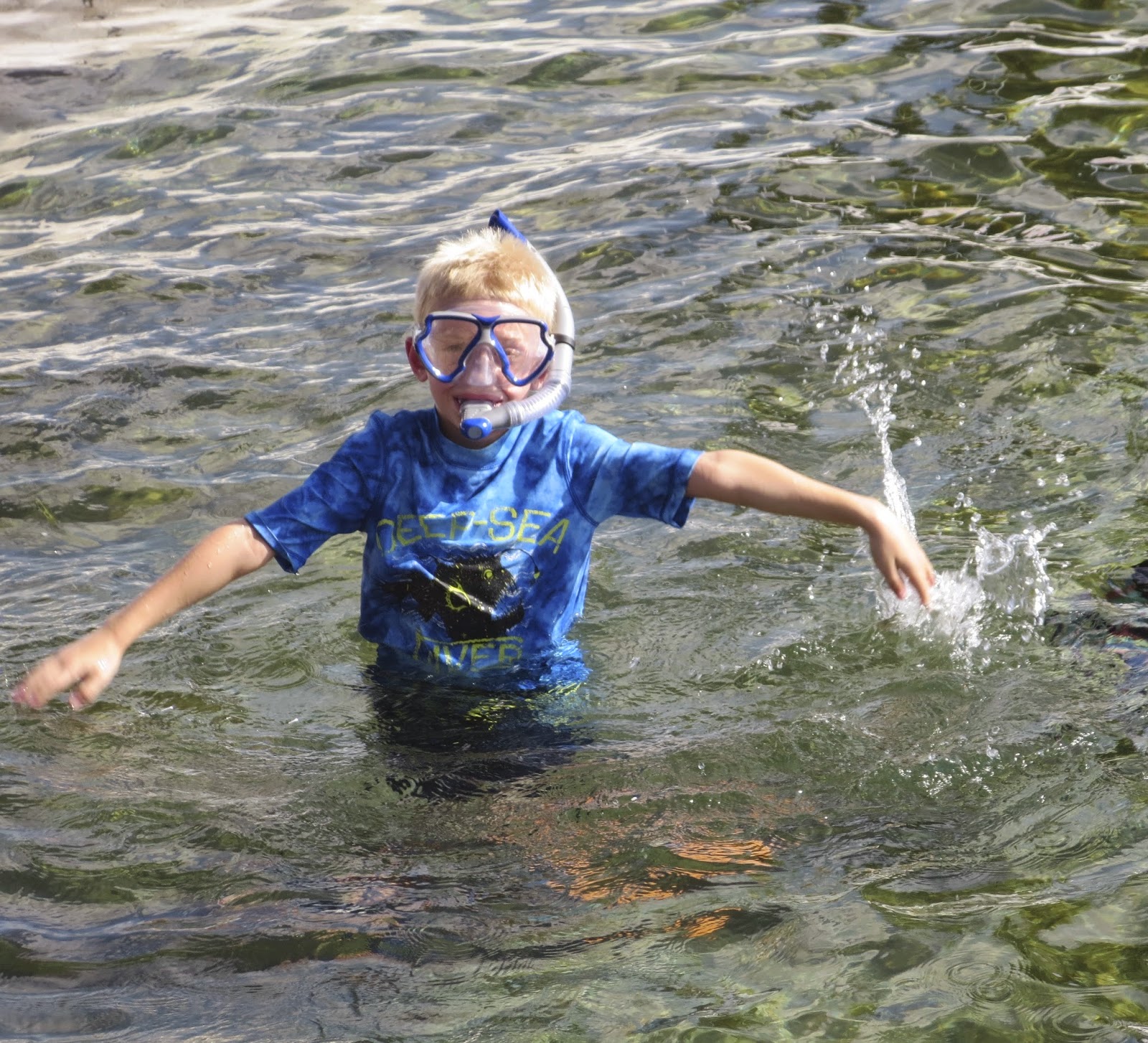 The water was a cool 72 degrees F. It sure felt colder when you first jumped in. 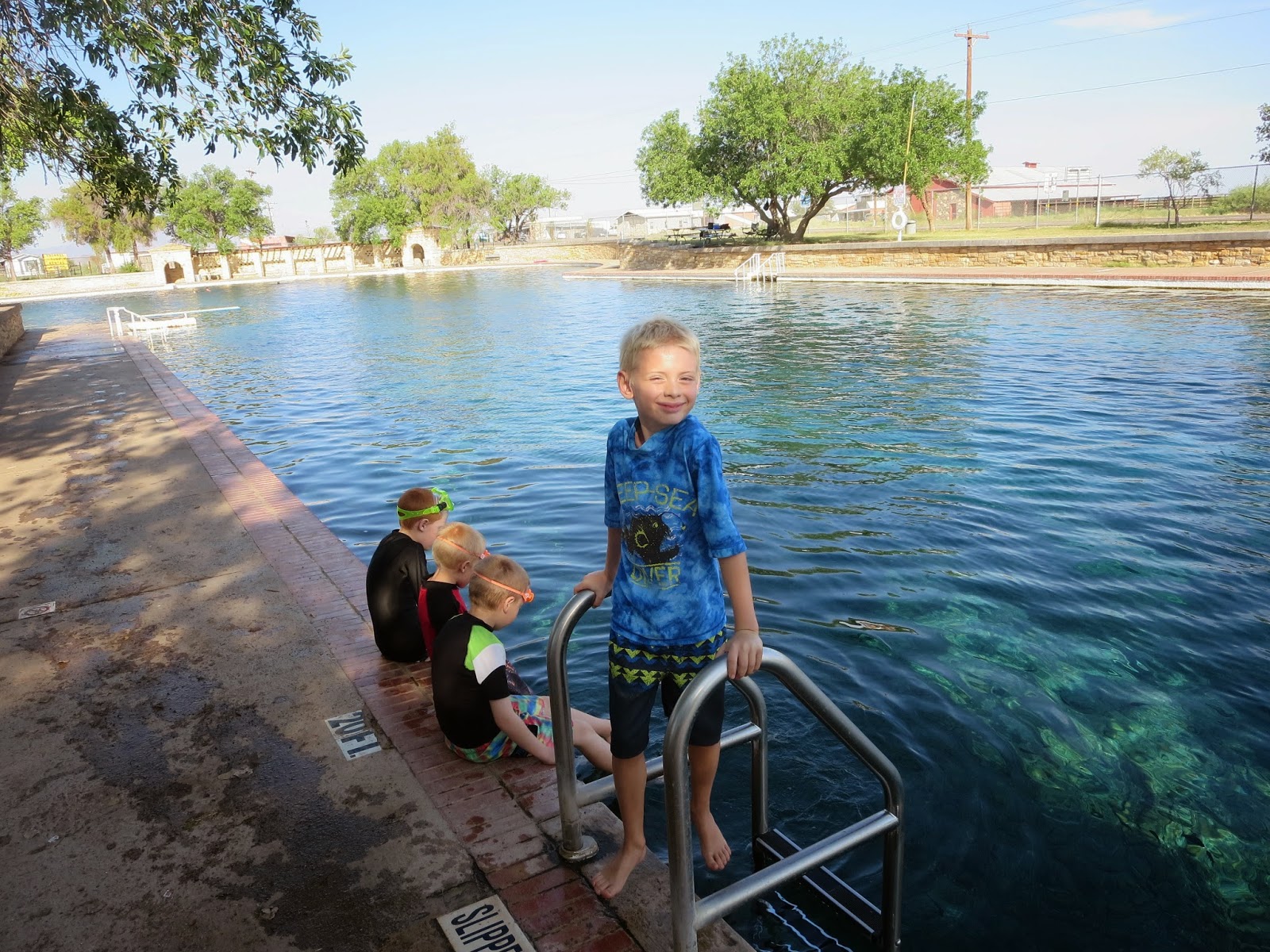 We swam three times in the two days we camped here. These pool pictures are from both days of swimming. 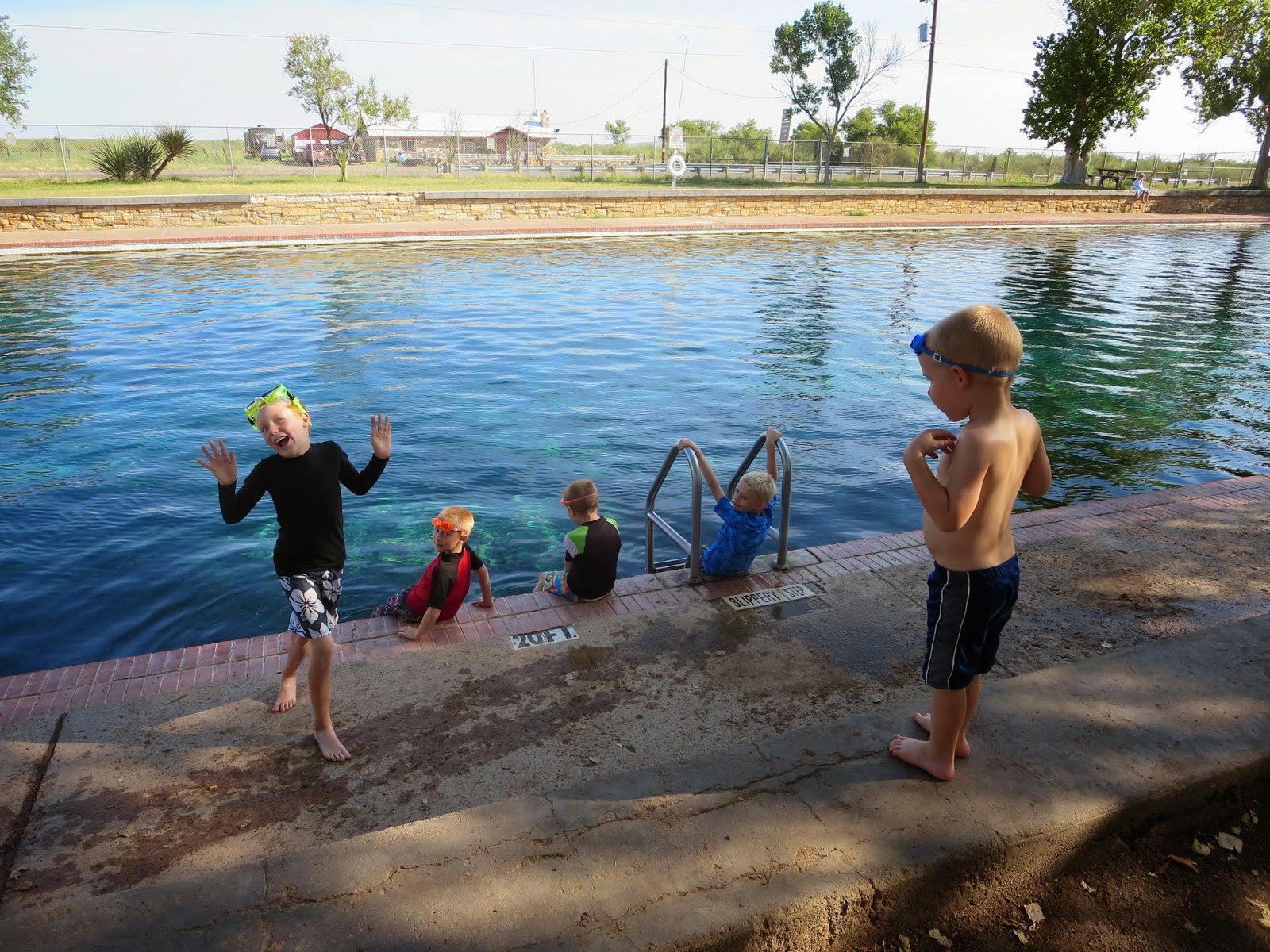 Daphne brought her underwater camera and took some really neat pictures. I stole this one off of her Facebook page. 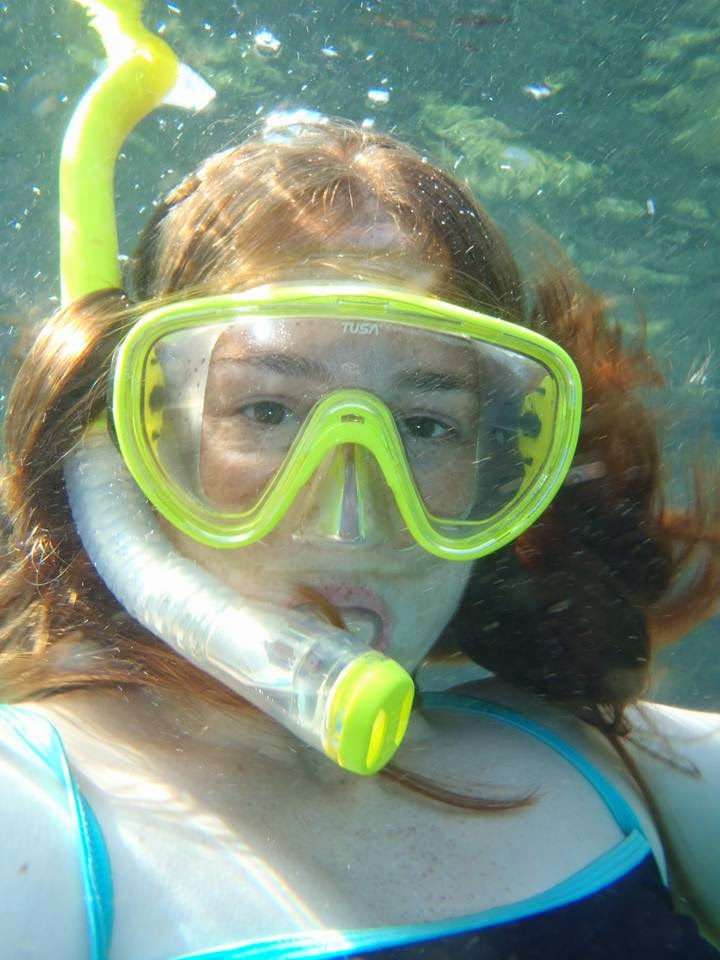 The boys really liked the diving boards. All five of them went off the low board. J4, the three-year-old, wanted to be big like his brothers. He walked out to the end of the diving board then wanted him mom to pull him in. 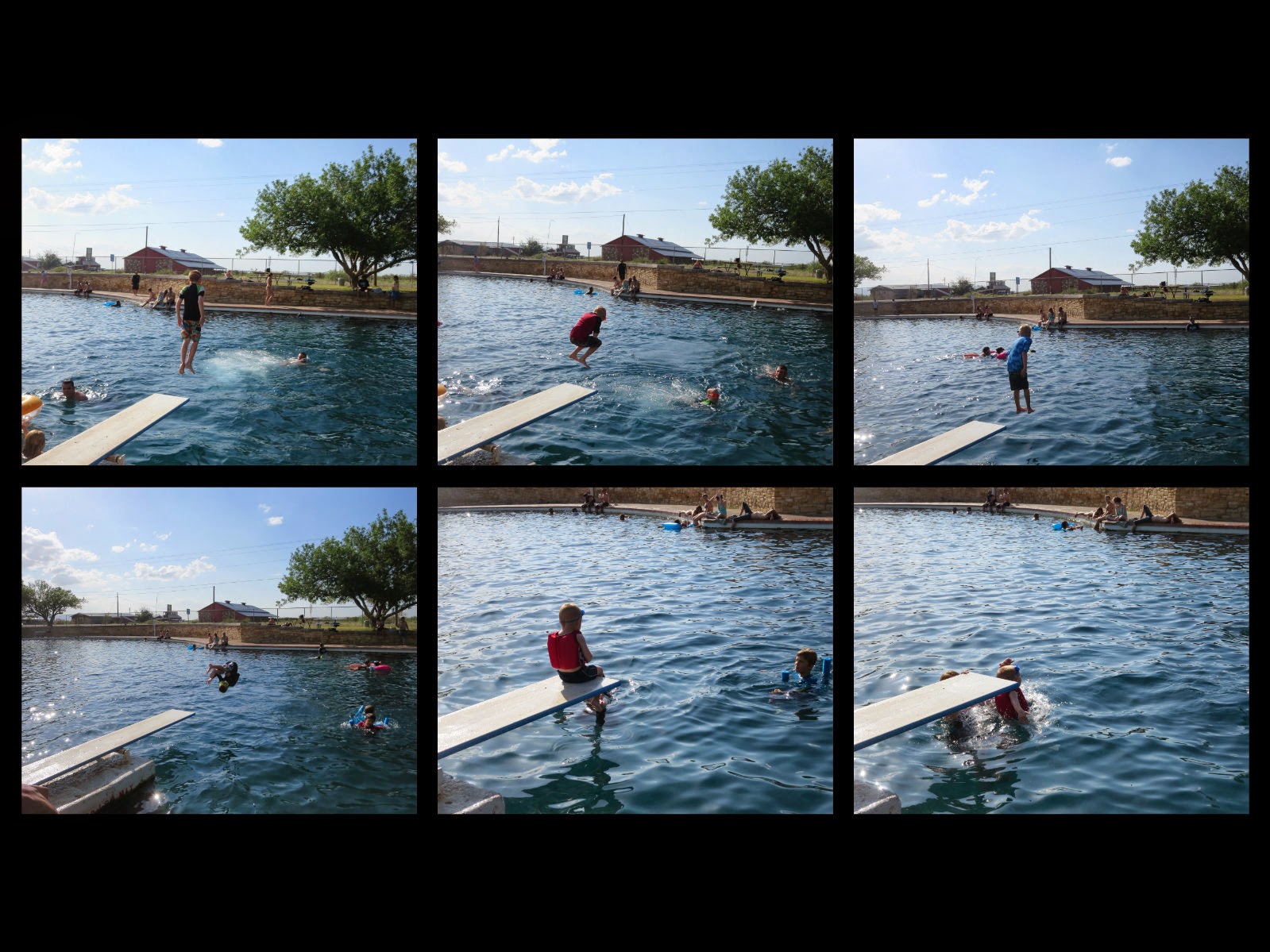 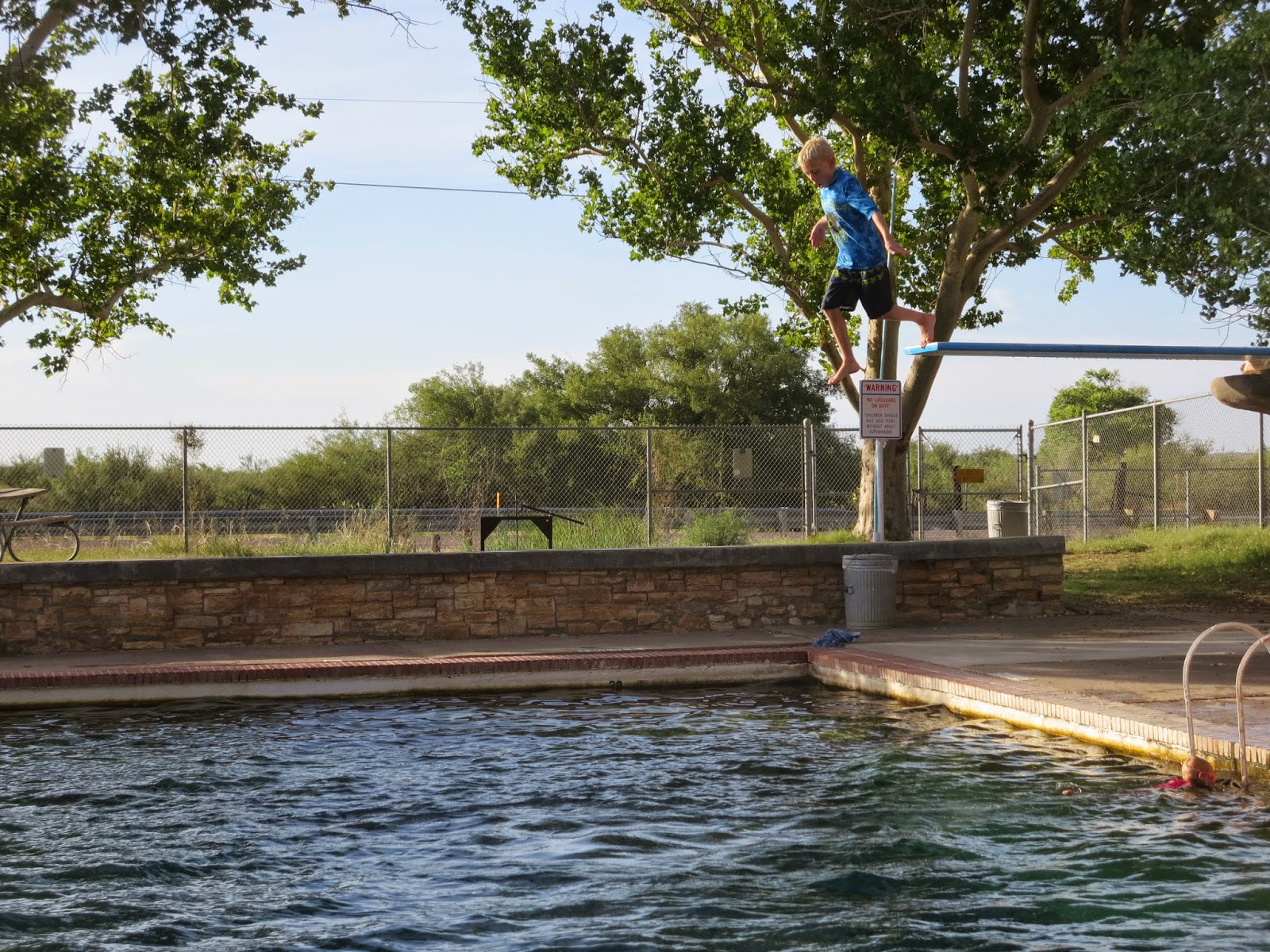 When they became too cold to swim, the boys found other ways to spend their time. J3 and Boogs followed a chipmunk around the field by the pool and watched it go down this hole in the ground. They decided to see if they could catch him when he came out again. 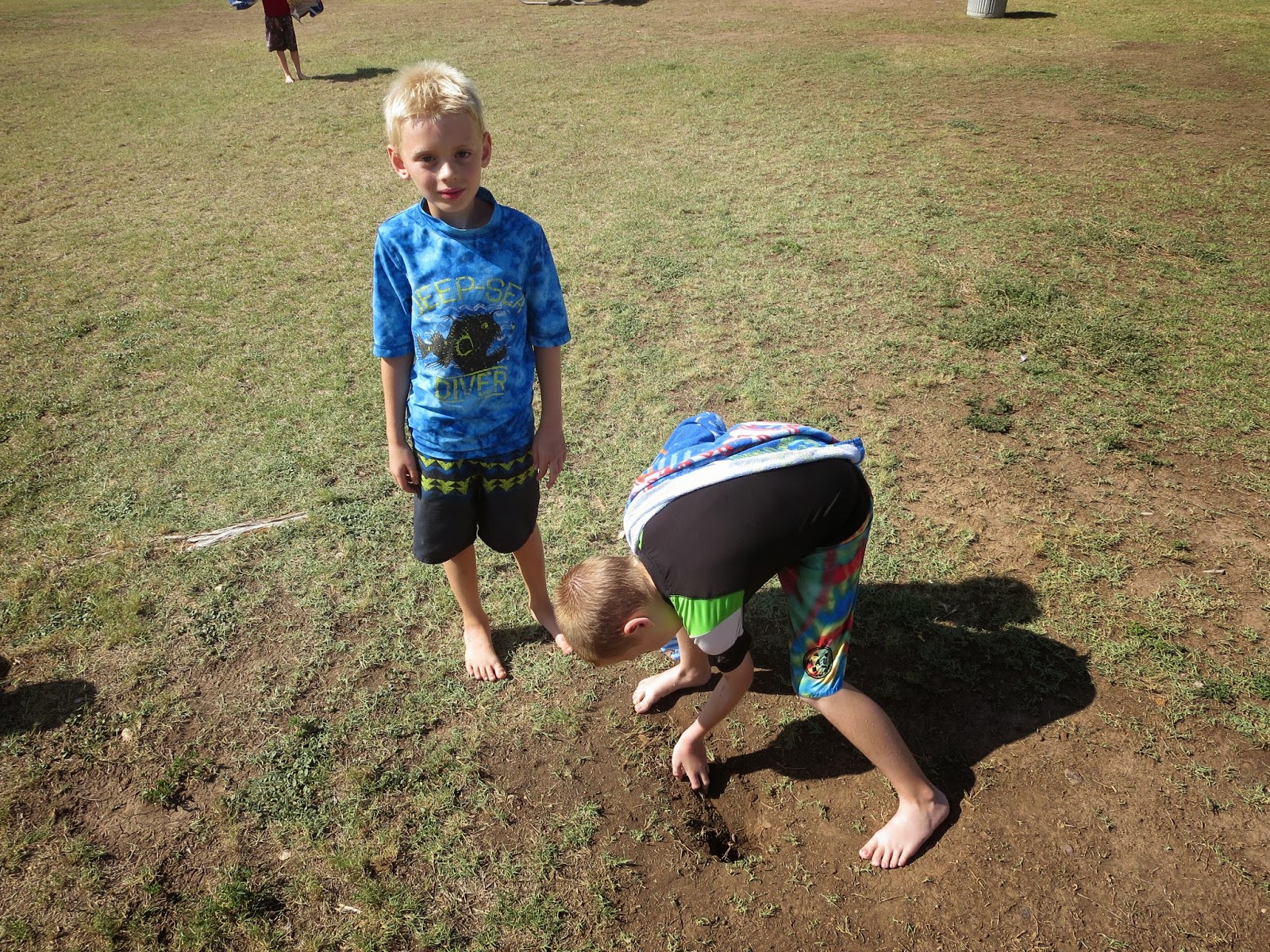 There were other chipmunk holes around the field. Pretty soon, all of the boys were guarding different entrances and exits. They never caught the chipmunk but they had fun trying. 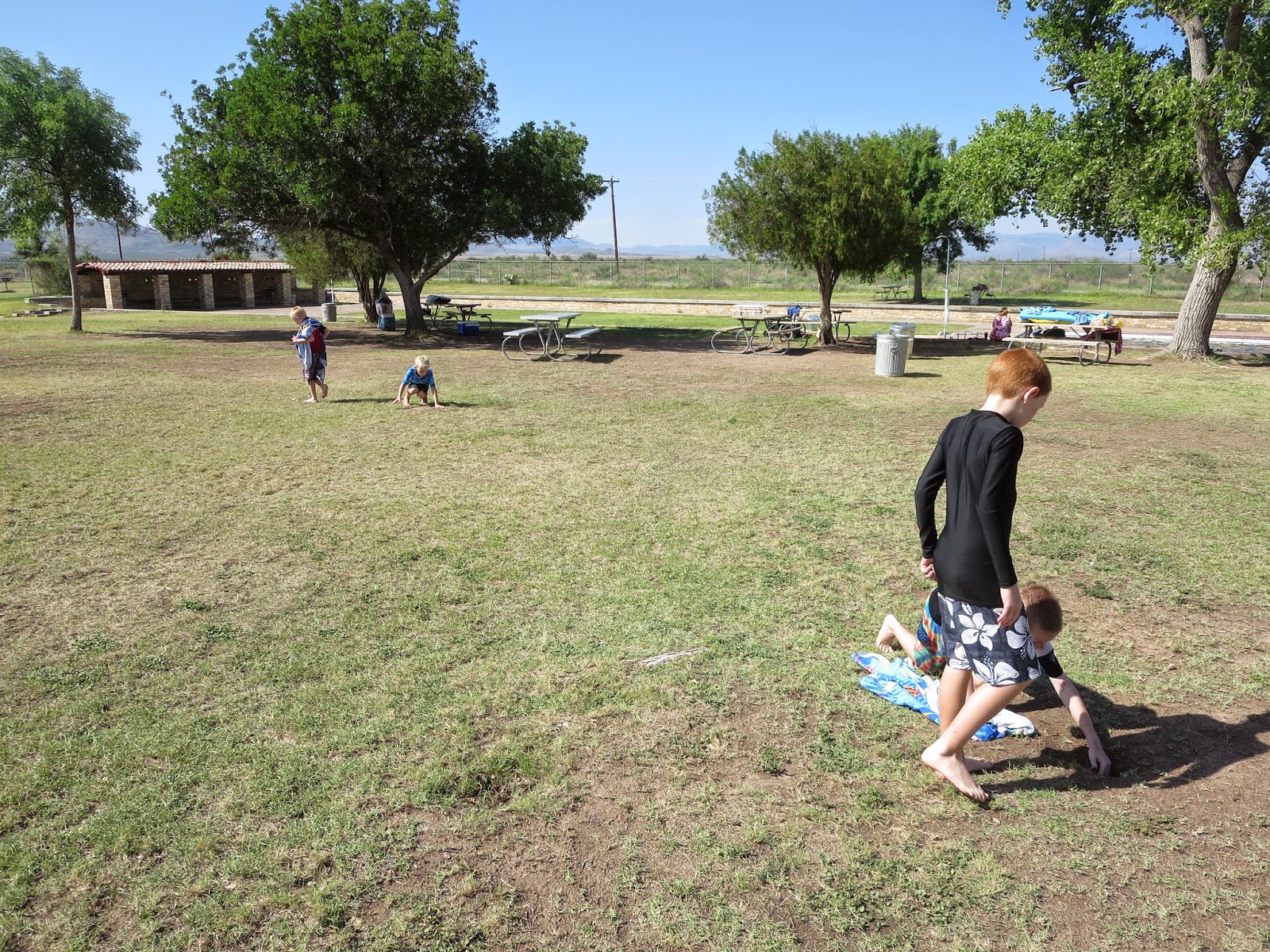 There were turtles in this part of the water. 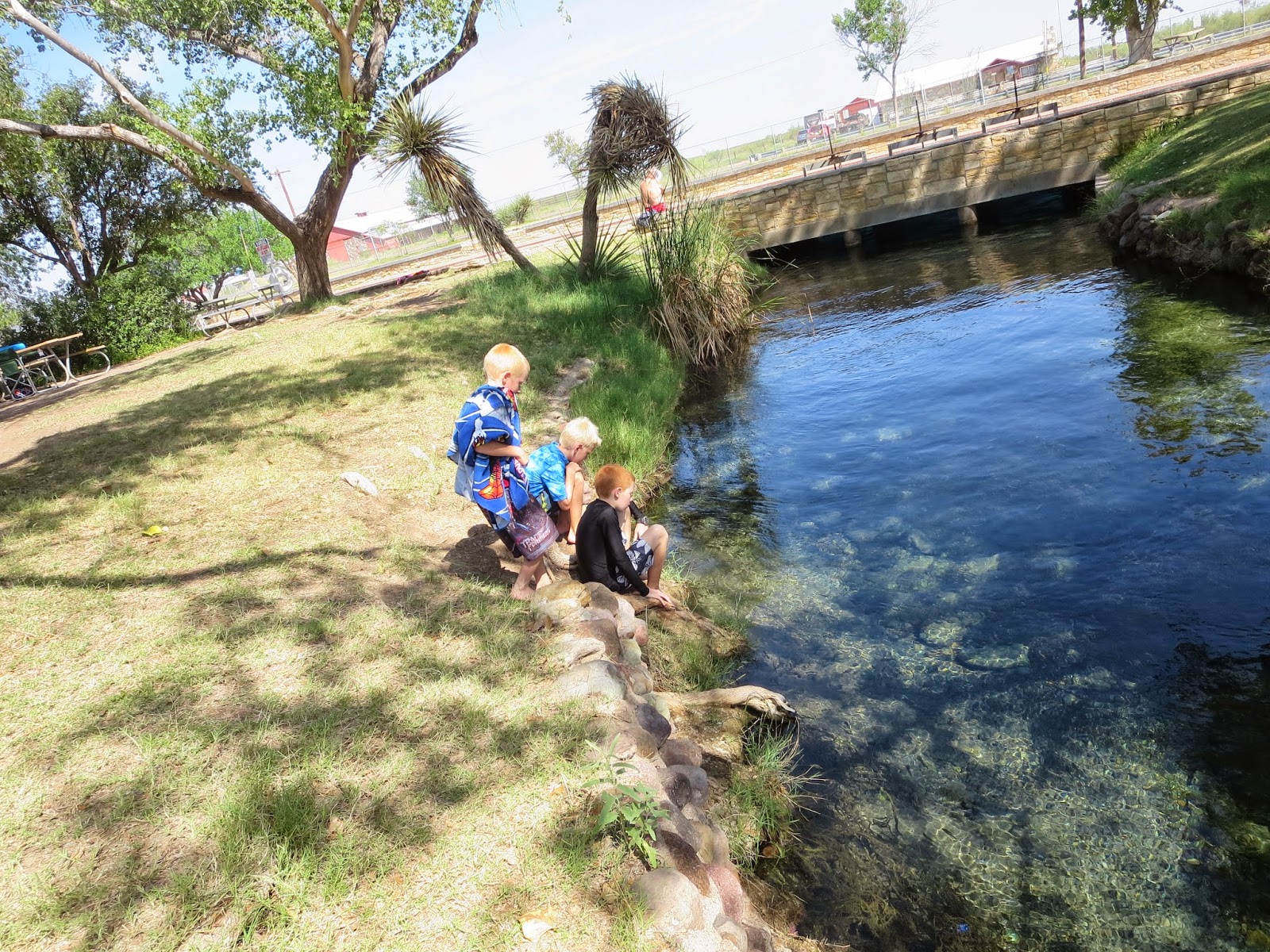 There was a canal behind our campsite. The boys liked exploring near it. They even took a badminton birdie down to the water and used it to try and catch a few fish. Guess what happened to the birdie? 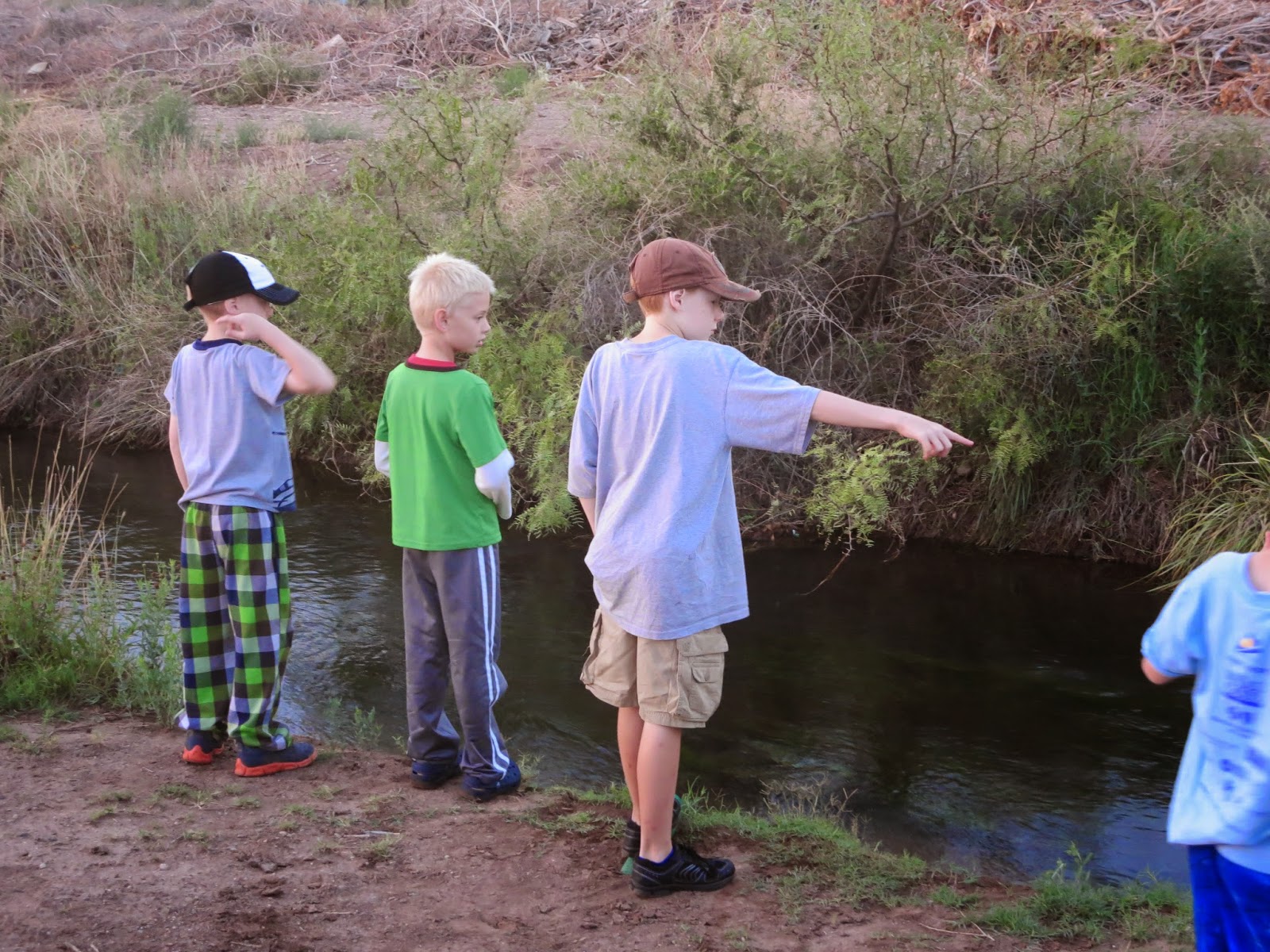 It was really nice to have a large covered area and picnic table at the campsite. We were able to sit in the shade while the boys had a championship Badminton tournament. The prize for the winner was a fruit cup. 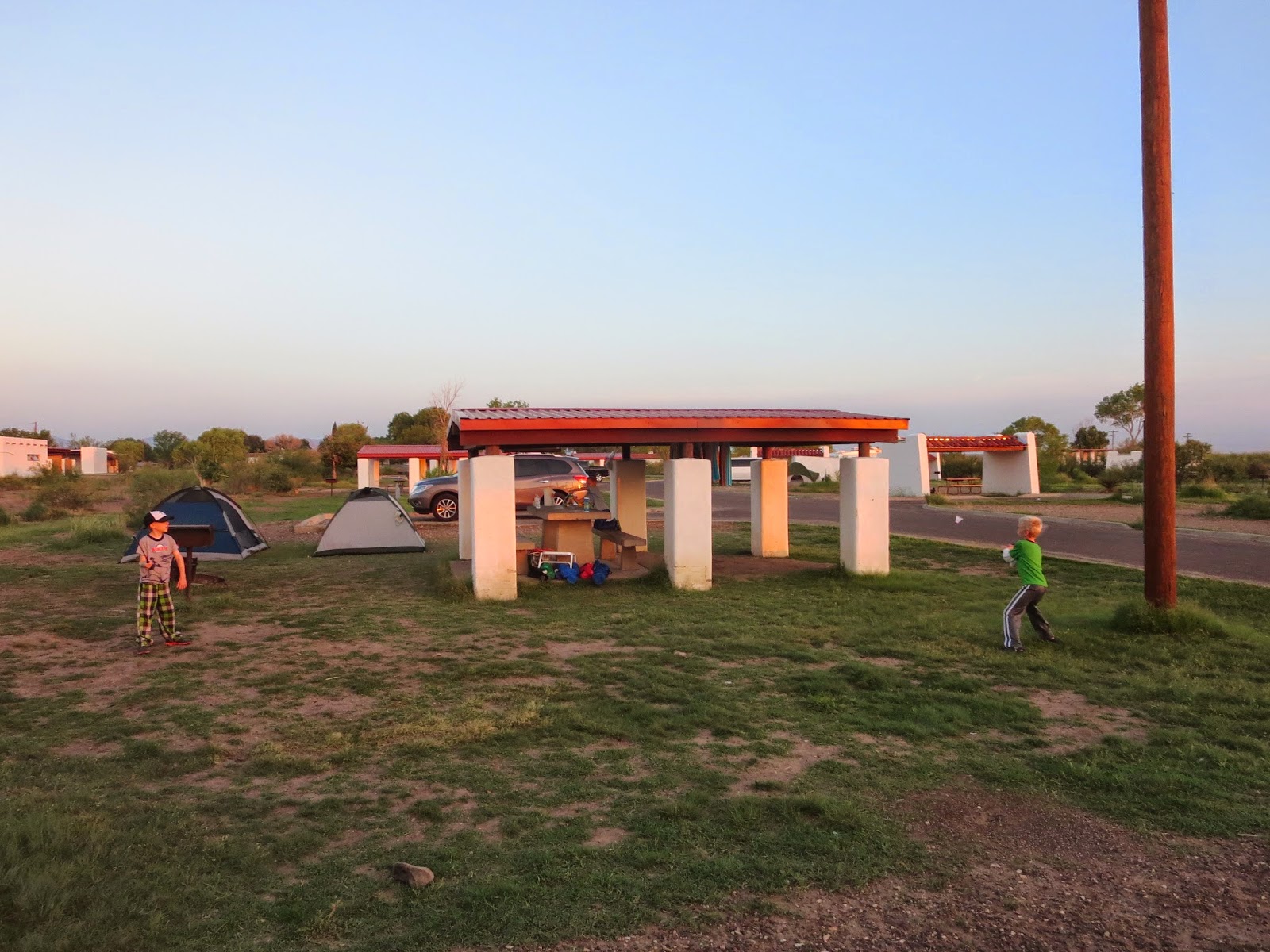 The park let you borrow a Jr. Ranger Explorer Pack. It came with magnifying glasses, binoculars,  crayons, a journal, drawing paper, an animal track identification set, and 6 guides for identifying different types of animals and plants. The boys explored with it for a bit but soon got too hot. 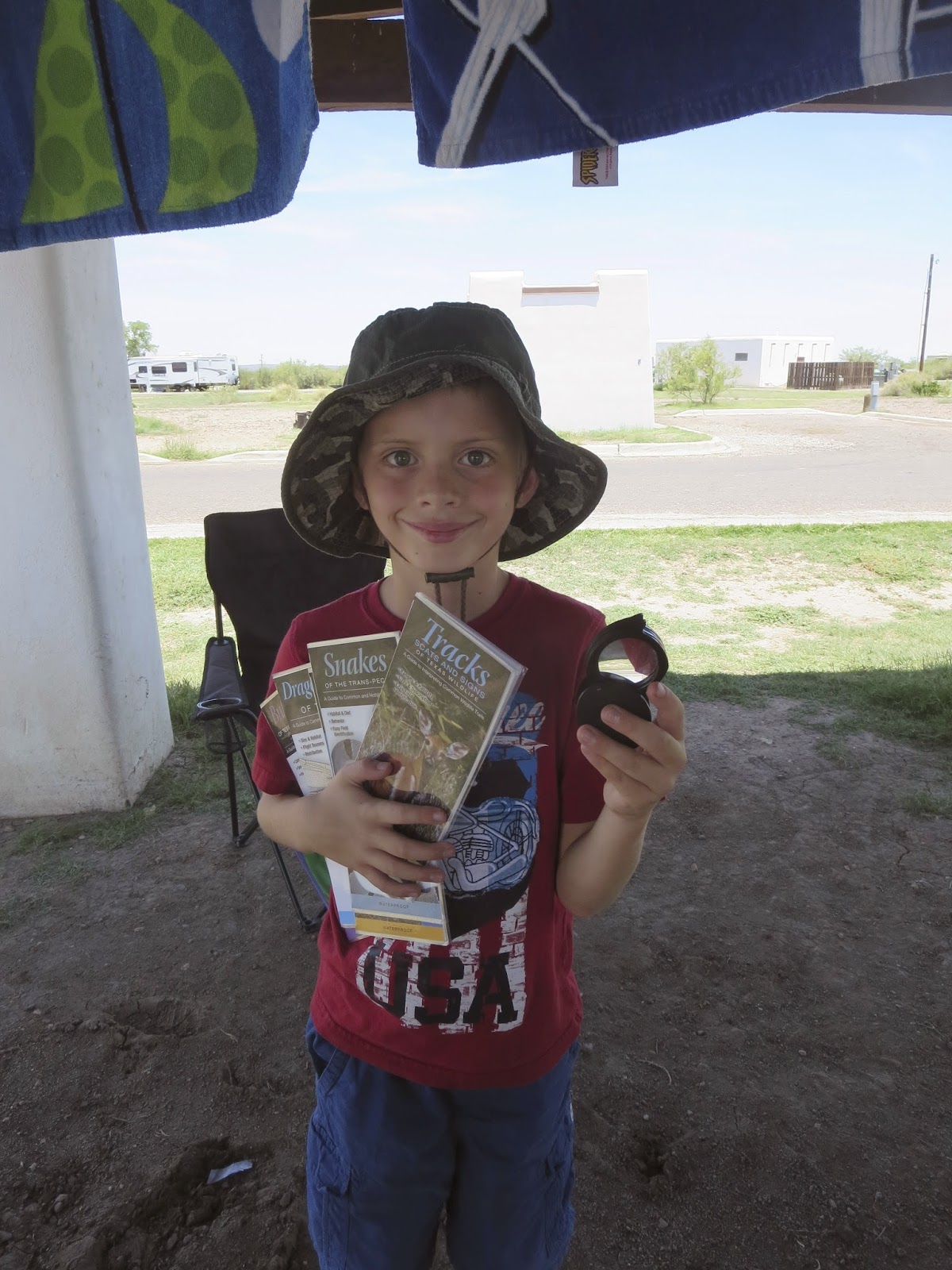 On the second day, we decided to get out of the heat by taking a little side trip to the McDonald Observatory in the Davis Mountains. 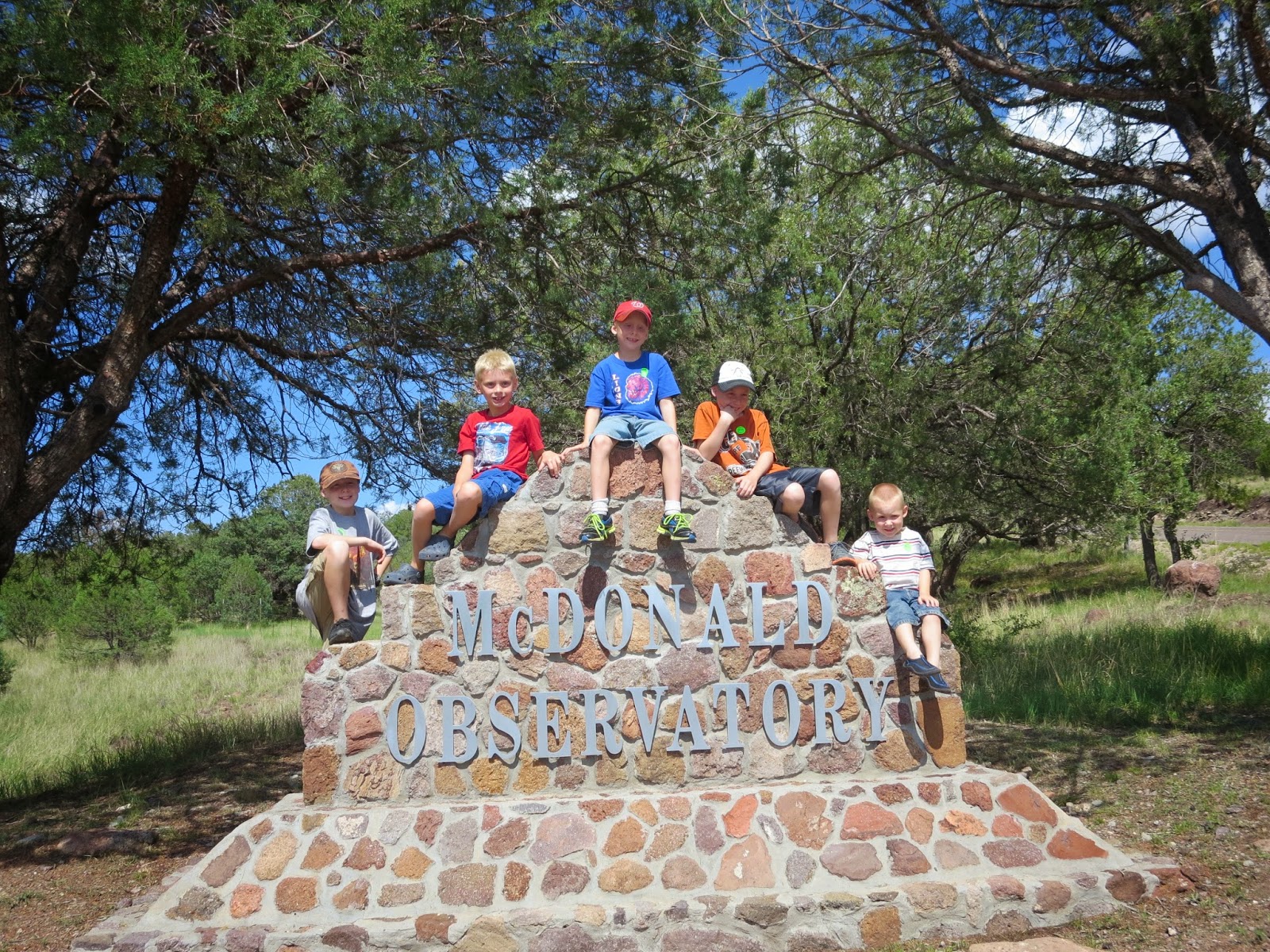 We were able to join a tour to see and learn about two of the largest telescopes at the observatory. I thought it was very interesting, but I don't think the boys really enjoyed it that much. 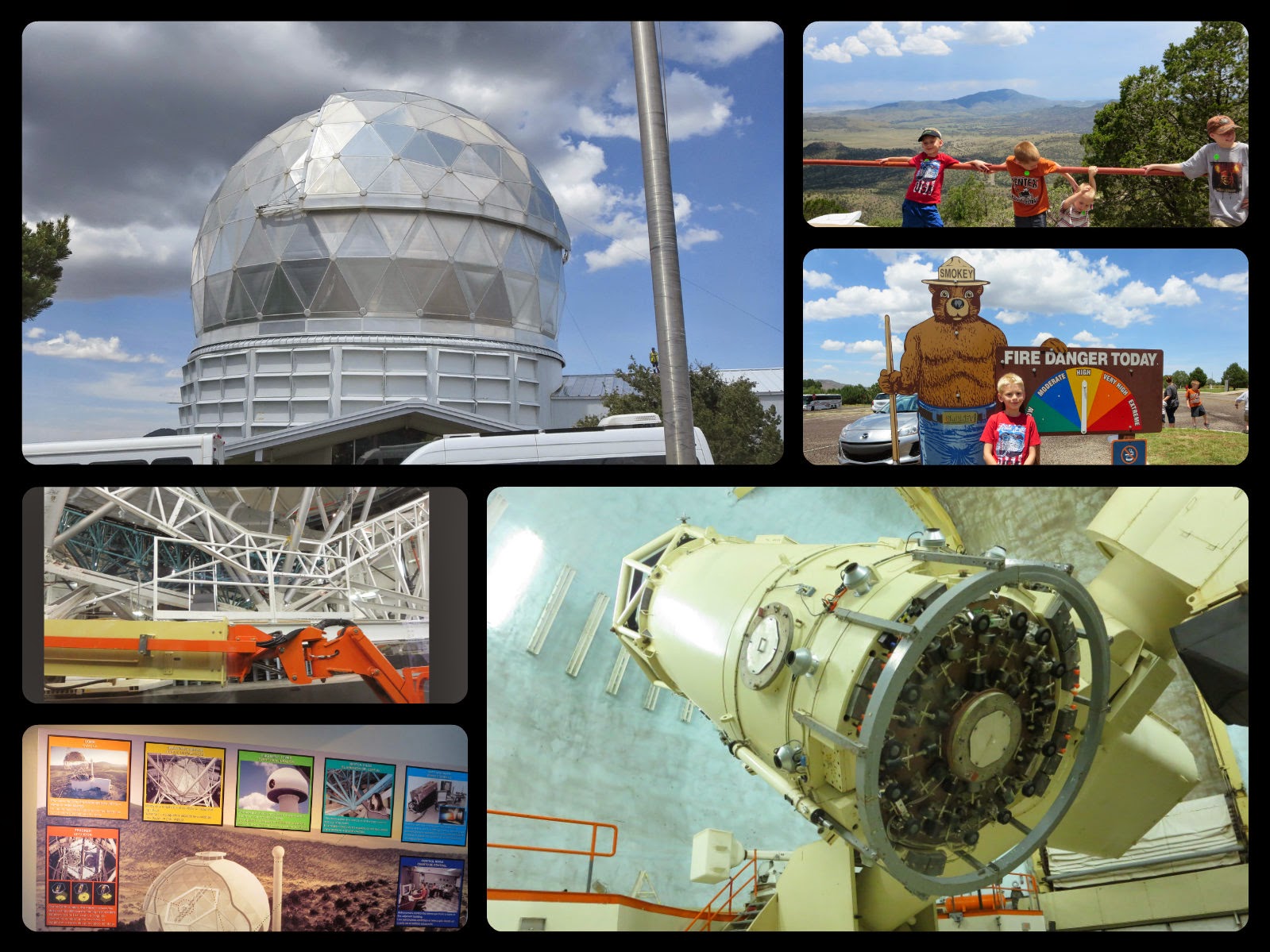 Around 4am on the second night of camping, Daphne woke up and noticed huge dark clouds in the sky. The two of us hurriedly threw everything (chairs, toys, towels, ice chest, etc) we could into the car before the storm hit. It was a fierce rainstorm with lot of thunder and lightning. It felt like the wind was going to blow our tent away. Luckily, the rain stayed out of our tents. I was the only one who did not sleep through the storm. The storm lasted a little over an hour. By seven, the sky was clear and beautiful.


Boogs actually slept in Tuesday morning. We were doing a great job of wearing him out. 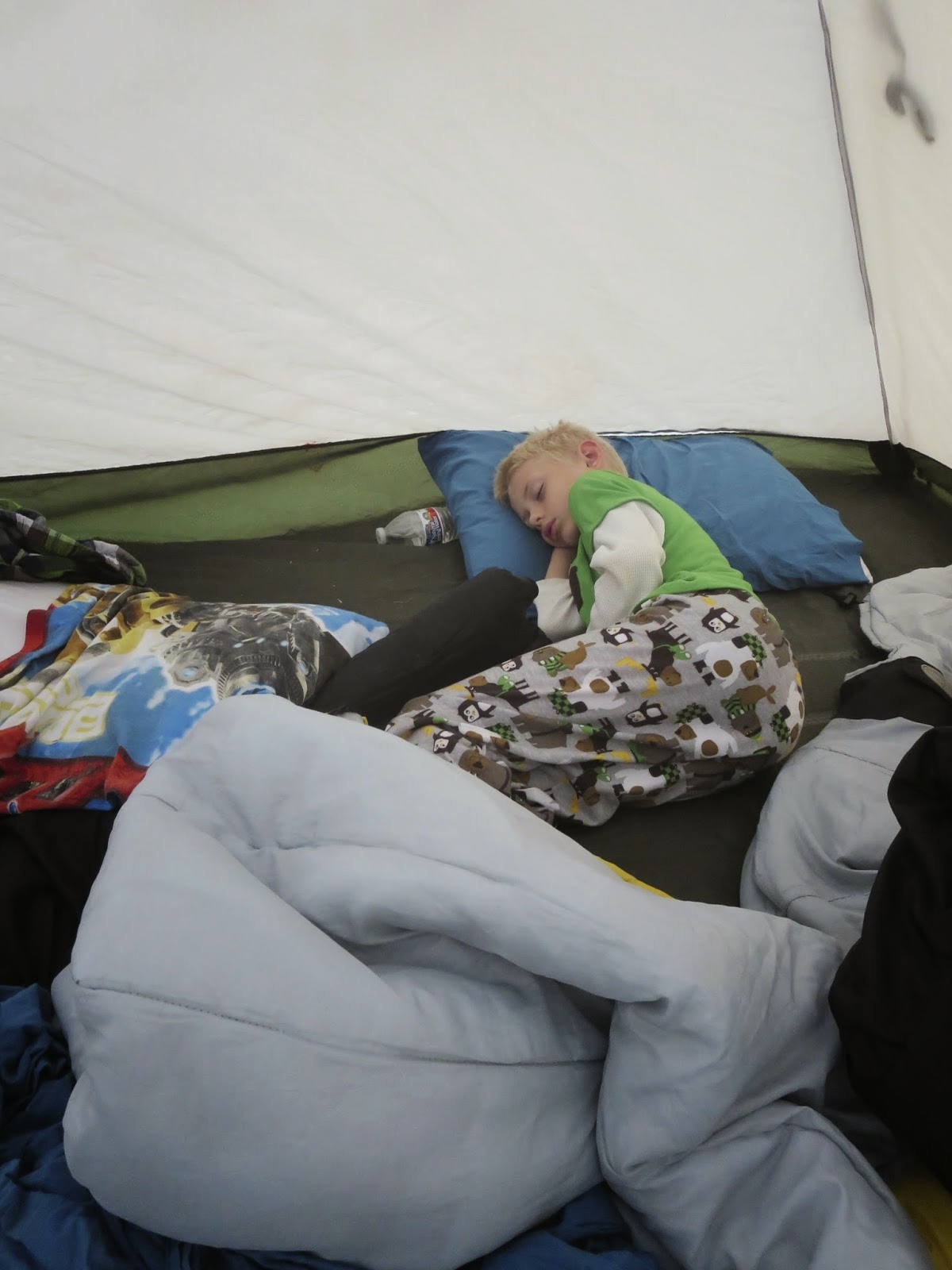 As soon as we got all of the boys up, we packed up our tents and headed out for New Mexico.

I will post more about the next part of our trip another day. This post is linked to: