Boogs is turning 10 in just a couple of days. How did he get to be in the double-digits so quickly? A couple of weeks ago, Boogs asked if he could have a mystery/spy/secret agent type of theme for his birthday party. He really enjoys coming up with ideas for his parties. We decided to make his party about secret agents training to find the missing treat bags.

He had the party yesterday. Here is the party agenda we settled on: 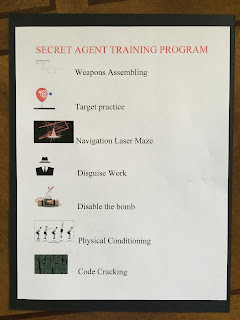 After the kids completed each training session, they had to initial the program sheet to make it "official".

The Weapons Assembling training was to make marshmallow shooters and decorate them with duct tape. I found this amazing little tool for easily cutting pvc pipe. Each kiddo got a bag with the following pieces of pvc: 2 straight connectors, 2 end caps, 2 tee connectors, 2 elbow connectors, one 5 inch piece, one 4 inch piece, three 3 inch pieces, and three 2 inch pieces. I covered mine with pink sparkly duct tape. 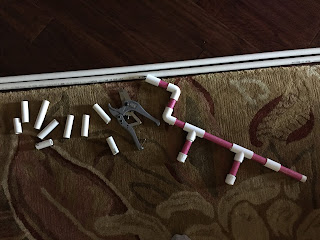 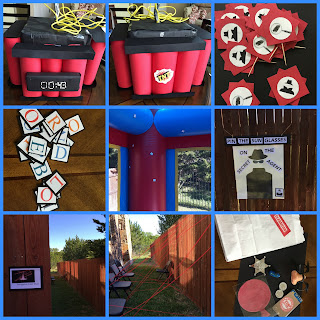 I made a TNT pinata for Disabling the bomb (Thanks One Creative Mommy for the idea). We had spy and magnifying glasses cupcake toppers. Letters that spelled out a secret code were taped all over the bouncy house for crack the code and physical conditioning. Instead of pin the tail on the donkey, we had pin the sunglasses on the secret agent for disguise work. The laser maze was set up on the side of the house. The missing treat bags were hidden until the party goers completed their training and used the clues to locate them.

I was pleasantly surprised by how much the kids enjoyed assembling their marshmallow shooters. 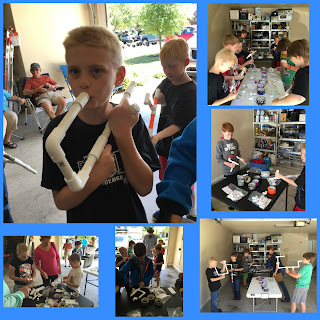 A couple of kiddos left their marshmallow shooters white, but most of them decorated them with different colors/themes of duct tape. I had marshmallow shooter diagrams available for the kids to use or they could come up with their own design. It was funny listening to them discuss their designs. Many had to make tweaks on airflow issues after they tried a few practice marshmallows. J4 added a scope to his. 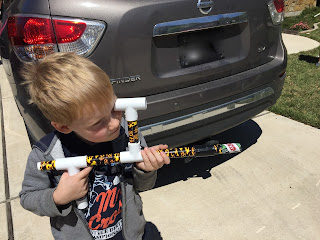 After the recruits initialed the completion of their weapons assembly training, they were free to begin target practice. I tied string between two trees and set up a couple of rows of balloons for target practice. The kids shot at the balloons for all of ten seconds before they turned the shooters on each other. Luckily, I had them covered with protective eye wear. Some of the boys laughed and said the sunglasses were almost "too cheesy" to wear. 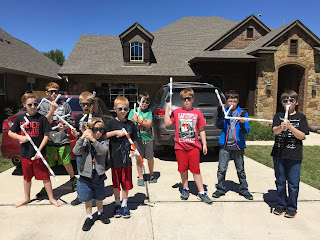 They had a blast shooting marshmallows at each other. My husband swiped my pink and sparkly marshmallow shooter and played, too. 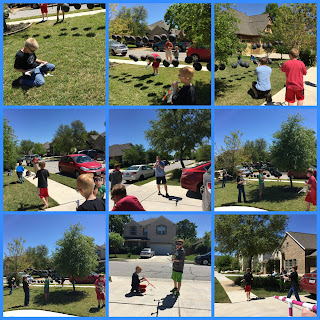 Before they could initial the completion of their target practice training, the recruits had to collect all the their spent shells. (Hee hee, that was a sneaky way of making sure they picked up all the marshmallows in the yard.)

The next phase of training was navigating through a laser maze while my husband shot marshmallows at each recruit. 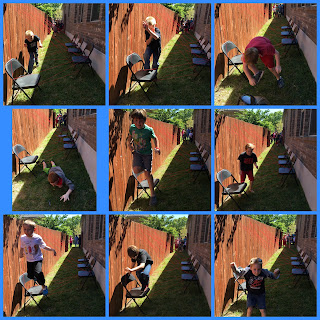 I used a clipboard to protect myself from incoming marshmallows. I love that my mom went through the maze, too. She is so much fun! 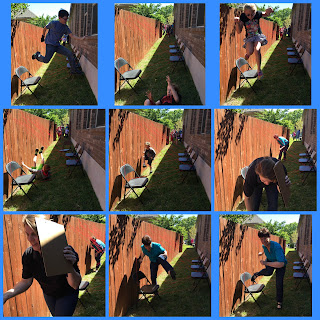 Once we reached the safety of the backyard it was time for a little physical conditioning, also known as "don't hurt each other in the bouncy house". While the recruits were jumping, they had to retrieve 28 letters that were taped all over the inside of the bouncy house. 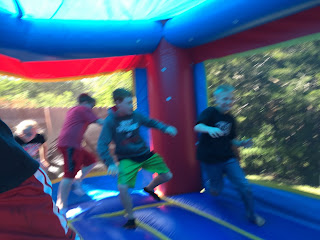 I called each recruit out one at a time to write down their secret agent name on a pair of sunglasses for the Disguise Work - Pin the Sunglasses on the Secret Agent. Once everyone had chosen their name, it was time for them to line up for Disguise Work. 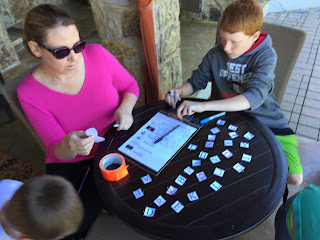 The recruits started arguing about where they should be in line. So, I told them they had to line up in alphabetical order by their secret agent name. (Yes, sneaky learning practice!) Axios went first and Wrath was last. 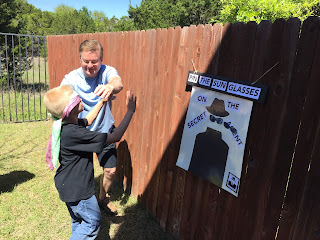 We took a break from training to have pizza, veggies, and fruit for lunch. When they were ready, we continued training with code cracking work. I let them work for a few minutes before I gave the hint that each word was a different color. They did a great job using teamwork to figure it out. 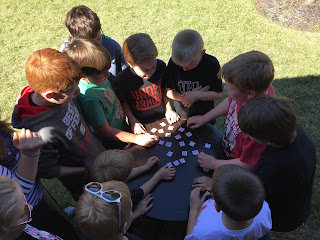 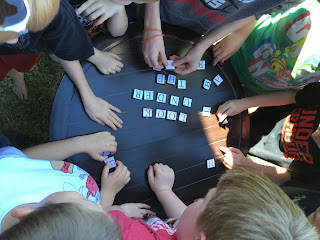 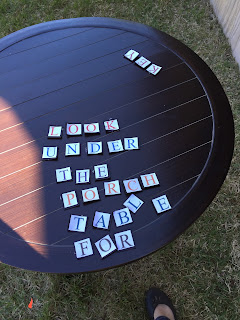 Attached to the key under the table, not this table, was a note written in a teeny tiny 3 point font. Boogs had to use a magnifying glass to read the clue to the group. 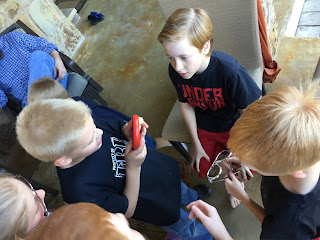 The clue said, "Use the key to unlock the fence. Look up to find what you seek. Let the birthday boy take point on this mission." The kids ran around to the front of the house and could not find what they were looking for. They eventually figured out that the key was for the back gate into the greenbelt behind our house. 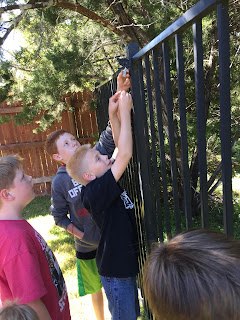 They searched a couple of trees until they found the one with the missing treat bags. Boogs brought the bags to the backyard and distributed them. 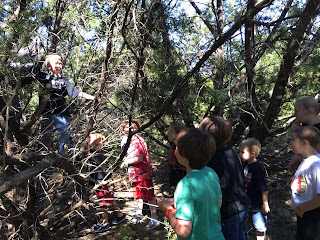 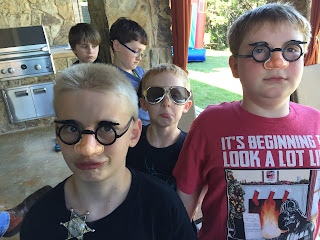 With bags in hand, it was time to disable the pinata bomb. 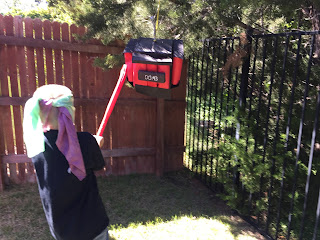 I made a strong pinata this year. It took three rounds before it broke enough for the candy to fall out. 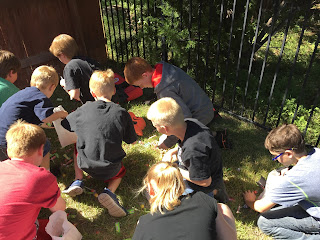 Happy Birthday Boogs! Cupcakes for all of the secret agent training graduates. 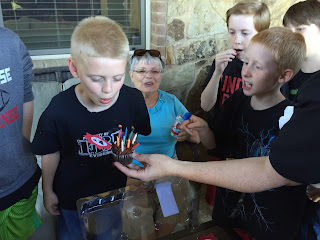 It was a fun party and Boogs had a great time hanging out with his friends. My husband and I have decided this will be the last year for the bouncy house. The boys are getting too big and too rough to play safely in there. It made me a bit nervous when they were all in there. I had to use my "ugly voice" several times to get them to stop doing things in which people could get hurt. We had a few tears, but no permanent damage. Boogs and his friends didn't seem to mind the sneaky learning activities included in his party - STEM, ABC order, spelling, and deductive reasoning. 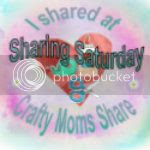