What We Have Been Up To

We had a crazy rainstorm last week. The lightning lit up the night sky and the thunder made the house shake. We need more rain but I would rather have a steady rain over several days instead of all at once. Boogs and I enjoyed putting on our boots and walking in the drizzle the day after the storm. 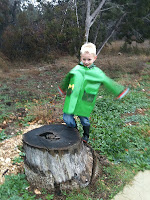 Boogs had fun building at the library Explorers Club Lego Lab. I think we are going to have a Lego party for his 6th birthday. 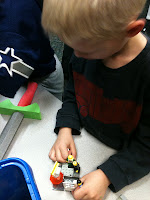 Boogs has been waking up ridiculously early lately. He is not allowed to wake me up until there is a 6 on his clock. I thought he had slept in one day this week because it was so quiet at 6:15. I went in his room and this is what I saw: 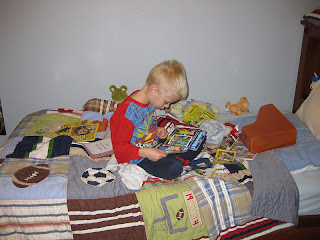 He was reading through all of his old National Geographic - Little Kids magazines. He told me there was a 4 on his clock when he woke up and he could not go back to sleep. How do you get a kiddo to sleep in?

Yesterday, Boogs and Daddy put on a magic show for me!

We have had a pretty busy week - swim lessons, playdate, Fit Club, Explorers Club, and a birthday party. We just signed him up for baseball. This year he moves from t-ball to coach pitch. I hope he enjoys it.
Posted by Keitha at 7:43 AM